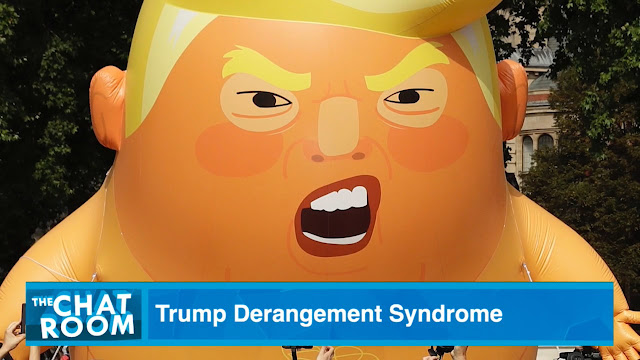 But what about the Democrat cabal, Senator Schumer, Representative Pelosi and the cast of characters under her care who pursued the first impeachment.

There indeed is Trump derangement in those quarters and elsewhere.

Meanwhile there are about 80 million people who voted for President Trump and they believe the conspiracy theories, some of which hold a grain of truth. Some of those voters, a percentage at the Washington protest that stormed the Capitol, are quite capable of insurrection.

Schumer seems a bit more measured than Pelosi who has been and still is unhinged over Trump.

Can she be charged in inciting another insurrection because of her Trump derangement, a second impeachment less than 10 days from Trump’s presidency ending.

Are the wild numbers of democrats who are and have been unhinged since Trump was elected as responsible for the state of the nation today as President Trump.  I think so. I wish they all would resign.

Pray for our nation and for good leaders to step up and run for government. We don’t have them now in Pelosi and Schumer.

Has the president betrayed his oath and committed impeachable crimes? Yes, he has.
Does Congress have the responsibility to prosecute these crimes? Yes, it does.
Is the cop who stops me for speeding for the second time unhinged? No, not if I’m really speeding.
Is turning the name of Senator Schumer, a Jewish man, into an ethnic slur kind of gross? You bet.

What the h... are you talking about. Maybe you too are unhinged and see the use of Pelosi's name as a ethnic slur that is kind of gross. Do you have a problem with the use of a person's last name without the first? Is that it? Gross, you bet.

Nobody mentioned “Pelosi.” I specifically mentioned Senator Schumer. I understand from reading you over the years that you don’t have a strong understanding of American history, especially in social issues and other ethnic groups. But “Slummer”? Disgusting.

Slummer, where did you find that. Yes, you need a mirror Jack the Ripper, and maybe some help to overcome your antisemitism. Slummer???? Really, that's gross. And the name Jack the ripper, really, someone who slit throats, that's your handle????? Really, beyond gross.

Ah, you changed it from Slummer to Schumer. Good call. Thank you for responding.

As for your childish insults about my name, I am a retired decorated Air Force brigadier general. They made a movie about me. You can look
It up.

Never had Slummer, but a misspelling of Schumer which I correctly immediately after posting. But your second alias is as bad as the first, beyond gross squared.

You are talking to Dr. Strangelove, apparently, Father. GREAT dark comedy, unfortunately hijacked by a ranting and humorless troll with nothing better to do than lie about his name.

Jack, old boy, that first suicide attempt seems to not have taken all that well.
May I be so bold as to suggest you try just a little bit harder?

I must say that there is just something deeply strange and not very smart, for a ranting troll to be taking Father to task over imagined offenses, while said troll adopts the name of a paranoid delusional movie character who thought fluoride treatment a conspiracy.

Had never before seen genuine Freudian slip, but now, I have. You go, Jack!!

Hey, Jack, before you go, better brush up on that woke-offense vocabulary. Slum and ghetto are not interchangeable.

You will need work a lot harder at charges of antisemitism when accusing someone of using a word which is not, nor ever has been, seen as antisemetic.

Ghetto is a word often applied to Jewish enclaves by outsiders, and Italian term. Slum is not a word normally associated with anything but a poor run down part of city, and a slummer a denizen thereof, or someone acting trashy.

Brush up on that diction, willya?

Nancy Pelisi CAN be charged with an impeachable, federal crime for having ripped up, on LIVE television, the copy of the State of the Union report the president handed her because it was GOVERNMENT PROPERTY destined for the U.S. archivist’s office, not a “personal copy” for her to dispose of as she pleases. An ACTUAL CRIME broadcast on television, as opposed to the supposed “crimes” for which the president was actually impeached.

Looks like it was actually Father’s spellcheck that was unhinged.

Anon 11:10 - Good reference. The Conspiracy Theorists have, fundamentally, a spiritual problem. It seems that they are so desirous of controlling the world which they inhabit, that they lose grips on the world in which they actually live.

RS - Nope. No crime "Legal experts have widely dismissed the notion that federal prosecutors would try to apply the criminal statute cited by Gaetz — which deals with “concealment, removal, or mutilation” of federal records — to Pelosi’s ripping up a copy of the speech."

"William Eskridge, a professor at Yale Law, confirmed with Reuters that this is a misinterpretation of the code in question, as the copy of the speech ripped up by Pelosi is not an official file. “The statute does not criminalize Pelosi’s expressive action of tearing up her copy of the speech. I don’t read the statute as targeting destruction of a xerox copy of a document, and even if there were ambiguity any neutral judge would read the statute narrowly, to avoid the clash with the First Amendment’s protection of expression”, said Eskridge."

"Steven Aftergood, a records expert at the private Federation of American Scientists, said: “Legally, this is a non-issue. Pelosi was expressing contempt for the president’s speech, and her views are constitutionally protected.” He said her torn-up pieces of the speech might themselves be considered a new record of historical value.

Laurence Tribe, a constitutional law professor at Harvard University, said Pelosi did not violate 18 U.S. Code Section 2071, the federal law defining the deliberate destruction of an official record that has been filed with a court or other government agency — a felony punishable by a prison term and by forfeiture of office.

Heidi Kitrosser, a law professor at the University of Minnesota, said: “This is not an archival document. ... This is one of many, many, many copies of President Trump’s speech and Nancy Pelosi is free to do with it whatever she will.”

Nothing terrifies right-wing men like a woman in power. With armed crazies roaming DC, Pelosi’s life is likely in danger.

I commend this thoughtful and balanced article published in the National Review a few days before the incident at the U.S. Capitol:

Hey, anon 508, neither did Trump given any direct order to rebel, riot, kill. Free speech is free speech so long as no direct incitement.

Trump was a fool if he thought this would stay pretty, and negligent in not forcefully and repeatedly emphasizing it should be a peaceful protest, and allowed his vanity to blind him to how dangerous this was, especially after seeing what was allowed to happen in Dem strongholds.

But stupidity is not a crime. And holding a rally is not an act of treason.

Using the entire weight of the Federal govt to frame a candidate and his associates on invented charges is a crime, that is a fact.

The way Trump mangles the English language and rambles, often verging on incoherence, suggests to me that he may well be a cunning “fool” who knows how to preserve “plausible deniability.”

Wow! All the “Anonymous” posters on this topic! Kind of like all the Antifa terrorists who hide behind masks.

Say what you want about the politics of Pelosi and Schumer, and I don't like them , but my opinion does not matter as I don't live in her district or in New York state. Pelosi's district in San Francisco is among the most heavily Democratic districts in the US---80 percent or so---and Schumer has been elected 4 times to the Senate from a state which is not remotely competitive in presidential politics. In fact, as liberal as Schumer is, the main threat to his tenure is from the Left, a potential primary challenge from AOC (Alexandria-Ocasio-Cortez, not the Archbishop of Canterbury) next year.

Say what you want about the politics of Pelosi and Schumer, and I don't like them , but my opinion does not matter as I don't live in her district or in New York state. Pelosi's district in San Francisco is among the most heavily Democratic districts in the US---80 percent or so---and Schumer has been elected 4 times to the Senate from a state which is not remotely competitive in presidential politics. In fact, as liberal as Schumer is, the main threat to his tenure is from the Left, a potential primary challenge from AOC (Alexandria-Ocasio-Cortez, not the Archbishop of Canterbury) next year.

Some want the privacy so they can so be trolls, invade to fill their empty days and lives, and sew argument and destruction same as their opposites in flame wars, and hopefully not get locked out of other places when accounts frozen, they live for their social media sites and do not want to endanger them.

Others, such as myself, are registered nowhere at all and have zero social media presence, and only visit sites run by someone of similar views, and do so out of privacy concerns in the non-stop tracking, and do everything they can to frustrate such an evil thing being misused before our eyes by them in shutting down all dissent. I could attach a name at end of post, I suppose, but it would be meaningless and disbelieved and just as easily faked a Brigadier General Jack D. Ripper USAF, and so, I do not bother, and also am essentially too lazy to do so.

Jack's posts and some others of late sure have shown the fruitloops have found this place now. They appear ripe for Q-anon when being a socialist fruitloop gets stale. They GOTTA have their outrage fix, no matter from where it comes.

If Trump is not removed from office, he will receive a presidential pension for life, secret-service protection & $1 million a year for “expenses.” The scam continues in other words. Someone who incited an insurrection to try to overturn our election results does not deserve another penny. Let the neo-Confederates & neo-Nazis & white supremacists defend him if they love him so much.

Excuse my ignorance, but in your system who gets to determine if Trump’s words can be legally regarded as inciting an insurrection to overturn the 2020 election results?

"Excuse my ignorance, but in your system who gets to determine if Trump’s words can be legally regarded as inciting an insurrection to overturn the 2020 election results?"

Ignorant at 9:39 - Put on your thinking cap and think about WHO gets to determine the legality or illegality of anyone's actions in our system. (HINT: Lawyers...judges...bailiffs...juries..."Order in the _____")