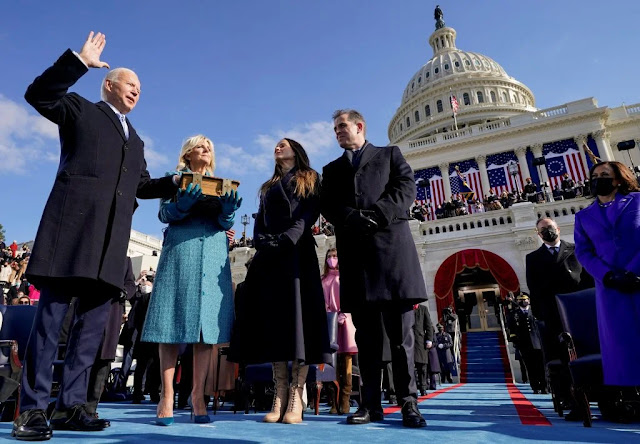 Cupich is a big time lefty, so no surprise there. Hopefully he will retire and an orthodox Catholic prelate will take his place.

And we are surprised by this because...?

Seriously, if I am surprised at ANYTHING, it's that Gomez had the gumption to make such a statement. Cupich--no surprise. I will expect equal fawning and slobbering from the James Martin enthusiast Archbishop of D.C..

All of this talk of unity is just that--talk.

We cannot have political unity when we have a "tolerant" regime informing us that if we disagree with anything or ask the wrong questions we are all Nazis and racists.

We cannot have religious unity when we have a pontiff whose "encyclicals" read like exegesis of the French Revolution and mocks traditional Catholics who pray the rosary for him.

Cupich is so far left....frankly very aligned with the Holy Father. In this case he should have kept his mouth shut but that is not something he is very good at. I wonder what Gregory's take is on this now that the publicly pro-abort President resides in his diocese. Anyone want to hazard a guess??

I don't think Cardinal Gregory, even if he did not like the procedure Archbishop Gomez used in releasing the statement would have gone public on twitter as Cardinal Cupich did. I think he would have worked with Archbishop Gomez privately which would be the professional thing to do. What Cupich shows is the division in the USCCB about being "culture warriors" which some bishops and evidently even the Pope do not like. But that should be hashed out privately and not made a public spectacle as it really makes the bishops look even more irrelevant to a large group of people in the Church and outside.

Well, isn’t the reason that the intended statement and response became public knowledge was because it was leaked by the press whilst under embargo ie The Pilllar - a breakaway publication from EWTN.

Never in history has the USCCB issued a welcome and statement to an incoming US President on the day of inauguration. That role has always been fulfilled by tan official statement from the Holy See. The fact that a minority of influential bishops within the USCCB surreptitiously prepared and planned to issue such a divisive statement in the name of the wider conference is the act of sowing division. The Holy See through the Nuncio rightly acted to prevent such an ill advised move.

The act of division was by the sub-section of US bishops who schemed to make the divisive statement in the first place, as well as The Pillar who released a press release under embargo and then withdrawn - with the purpose of embarrassing the Holy See.

Anons & others- Cupich reflects catholic social teaching. The fact that you consider this to be “far left” or “communist” says more about your extremism and distance from the authentic magisterium than anything else.

Fr McD - be careful you don’t fall into the Fr Z trap by allowing your blog to become a site used to express extremist views which foster dissent and division within the American church and wider society. I mean, we wouldn’t want you censured as well, or would we? Lol

Cardinals and bishops who did not speak out against Trump's 1001 offenses against human dignity probably should just sit down and stay silent. Just as they did for the past four years.

Why not post a constructive piece about the young Poet Laureate and her very inspiring poem. For me, it was the prayer of the faithful and touched my heart much more sincerely than the formal prayer.

UK Priest, read my post--it is Crux that I link. It must be very, very late in the UK that you did not realize that. Thus, I am sure you will be more than happy to email Crux in order to properly direct your comment erroneously sent to me.

"Cardinals and bishops who did not speak out against Trump's 1001 offenses against human dignity probably should just sit down and stay silent. Just as they did for the past four years."

LOL - you really live in an alternate planet of reality. Tell that to the Little Sisters of the Poor and the unborn

Cupich's idea of "social justice" is to steal from the productive and play down the fact that the modern raison d'etre of the Democratic Party is abortion. They embrace it and fundraise by promising to kill the unborn with no restrictions. Why don't you naff off before your fellow Brit, John Nolan takes you down

Another meaningless term. All it means anymore is anyone who dares to even QUESTION the orthodoxy of the establishment.

Fr McD - it may be that it is Crux that you link to, but the story was leaked by The Pilllar (a recent breakaway group from EWTN) which broke the embargo and released the non-story.

Mainline news services, CRUX, NCR and others are reporting this. Pillar broke it and it is true.

what a way to divide the Church - no Holy Spirit at working in that...
Cardinals cannot agree on what is important for catholics. What times.
I am surprised by Gomez's boldness and sadly not surprised by Cupich's statement.