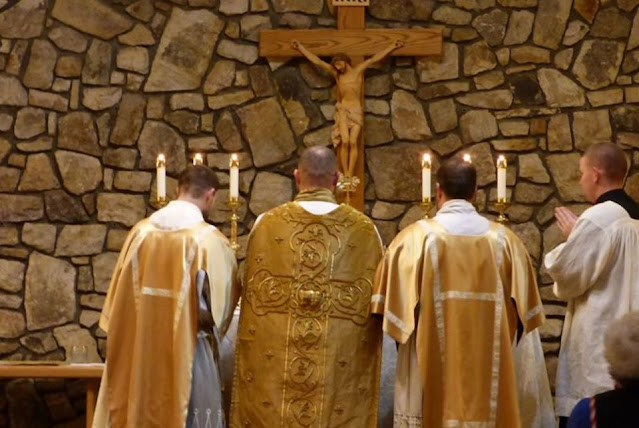 This is an interesting article in light of our discussion on how to keep the young Catholics who are actually coming to church from leaving.

This is NCR’s take on a parish in Boone, NC whose pastor, four years ago, began to take the parish to the right and how people my age and older decided that they would create a garage Mass.

They abandoned the young parishioners in the parish for their own clique.

In came Latin, incense and burned books, out went half the parishioners

I'll start by confessing: I have always been one of those who believed that the EF is the best way to offer Mass, that it needs to be restored and the Novus Ordo should be dispatched and that Vatican II was a huge mistake that we are still "covering up" decades later.

While I won't take back any of those ideas, I have come to conclude that something else is far more important in keeping young people Catholic or attracting young Catholics to the faith: Our example.

Do we, as older Catholics, live our faith with conviction? Is Jesus Christ truly the center of our lives? When young people look at us, do they see just another tired "flavor" in the denominational smorgasboard or do we distinguish ourselves by our humility, passion, devotion and sincerity.

I don't think anything is as unattractive to young people as phoniness. I think they look at Christianity and (given all the scandals) especially CATHOLIC Christianity and they see rank phoniness and hypocrisy. I can't change what some gay Cardinal is doing with Vatican money, but I can change what I'm doing with my own life. That's where it starts.

What happens when you go from one extreme to what has become the other. I could happily live in this environment but, after being several generations removed from how things used to be, obviously, many cannot. The only thing I don't care for is the authoritarian way the subject parish is now said to be managed. Two good things that came from all the changes is transparency and parishioners having a greater say regarding the direction of the parish and how its finances are managed and allocated.

Btw, most incense is vaporized resin. The wheezing and coughing, though some is likely a valid reaction to the environment, is more in people's heads than it is reality. We Easterners use plenty of it and very few ever complain despite the clearly visible cloud that hovers in the church after Divine Liturgy.

NCR, always fighting the last war. FYI, when Cardinal George was alive he forbad Catholic parishes from subscribing to NCR, and for good reason.

Thank you, Tom Marcus. The liturgy wars are moot when both sides are largely phonies.

BOTH sides are losing badly, as they do not have a heart directed first to God. When bishops, priests, and parishoners live lives indistinguishable from everyone outside the church, what is the point? Attendance figures say, "there isn't one."

And bishops, priests, and parishoners who make this only a political football of right/left, conservative/liberal are as worldly as they come.

Traditional worship styles ARE drawing younger folk looking for answers. BUT, when they look deeper and for more, for true saintliness of the pastor, true spiritual direction to help them concretely experience and know this God, most will not find or receive that, and then the majority will leave and a minority will stay for lack of anywhere else to go.

You can easily predict which parishes will continue to carry the torch....the ones generating saints and those parishoners and priests truly striving for sainthood, holy men and women raising holy families, led by a holy priest. ALL the rest are on the downhill slide and will just fade away.

Very insightful. The demographics indicate there will be very few practicing Catholics left in the US in 10 years.

I don't get it. The NCR people themselves feel free to disagree with Pope Francis on such issues as ordination of women to the priesthood, but then they decry priests for not being in line with him. It's almost as if they think that they're the only ones who can dissent.

Let us not forget that today, society's (including those who profess to be Catholic) motto is: "It's all about ME!!!"

"Burning books" . . . Always a good sign that a priest thinks it's all about HIM.

Yes, terrible, they do the same thing will useless vestments, broken rosaries and other religious artifacts. Someone once told me rather than burning these things, when a priest dies, to pack is coffin with them.

When the rad trads take over, division inevitably follows. Anyone who doesn’t toe their pharisitical line effectively gets pushed out. Not “leaves” — pushed out. They are to Catholicism what jihad-preaching Wahabi imams are to Islam.