FOR THESE CATHOLICS THE DEMOCRATIC PARTY IS THEIR PRIMARY FORMATION IN MORALITY, NOT THE CATHOLIC CHURCH—IDOLATRY ANYONE?

Turn the image into a donkey: 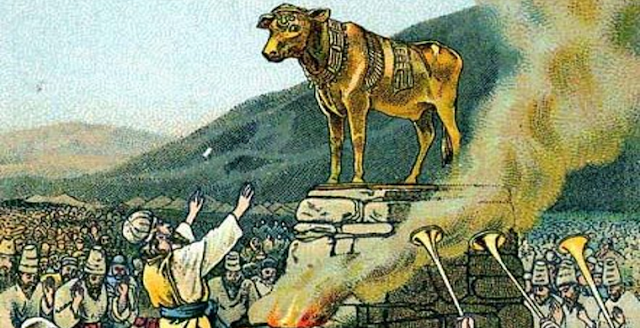 U.S. Catholics’ favorability of abortion rights trended to fall based on political affiliation. In the survey, Catholics identifying as Republican (63%) believed abortion should be illegal in all or most cases, while 77% of Democratic Catholics said the opposite.

This is pretty much in line with Americans overall, reports Pew.

Compared with other Christian groups analyzed in the data, Catholics were about as likely as White Protestants who are not evangelical (60%) and Black Protestants (64%) to support legal abortion, and much more likely than White evangelical Protestants (20%) to do so. Among Americans who are religiously unaffiliated – those who say they are atheist, agnostic or “nothing in particular” – the vast majority (83%) said abortion should be legal in all or most cases.

Look out! TJM is gonna go on a "Pew is a LEFTY organization and stupendously worthless organization" rant now...

Reading the above reminded me of a statistic I read recently: ie - former Catholics now make up 12% of the population of the USA.

Well for years the bishops have identified with the Democratic Party, so it is any wonder that the people are thinking that way? Of course it doesn't help that there is little difference between a Democrat and a Republican.

And yet, once again, national numbers show that the abortion rate ROSE under Trump, just as it rose under previous Republican presidents. The national abortion rate dropped big-time under the last two Democratic presidents. By the end of the Obama years, the national rate had dropped to Roe v. Wade levels. Education, access to health care, support for single mothers — they all matter. If you love abortion, vote Republican.

It’s great to have a president who goes to church that’s not a photo op.

Kasper if you believe the democratic talking points you make your own, then you are quite a gullible person and I have a bridge from Richmond Hill's "Fish Tail's Restaurant on the marsh here crossing about 15 miles to the Carmelite Monastery on the opposite side in Savannah that I want to sell you. What you write is to laugh and can be chalked up to fake news and statistics.

This will make Father Democrat sad:

Since the Supreme Court’s 1992 Planned Parenthood v. Casey decision, states have played an increasingly larger role in abortion policy. During both the Clinton and Obama administrations, Republicans made large gains in many state legislatures. In fact, between 1992 and 2020, the number of states where Republicans controlled both chambers of the state legislature has increased from seven to 29. Furthermore, many states with Republican legislatures have been very active in passing a range of protective pro-life laws.

Overall, as the pro-life position has made gains in the court of public opinion, groups that support legal abortion are trying a new strategy. Instead of arguing that that pro-lifers are wrong, they try to argue that pro-lifers are ineffective. They are quick to circulate analyses which purportedly show that electing pro-life candidates or enacting pro-life laws are ineffective strategies for lowering abortion rates. Instead, they claim that increased spending on contraception, health care, and welfare is a better strategy for pro-lifers. However, there are no peer-reviewed studies which show that more funding for welfare, health care, or contraception programs will result in abortion rate reductions. Conversely, there is a significant body of academic research which shows that a range of pro-life laws reduce abortion rates.

For Trump supporters, “Fake news” = inconvenient facts.
Basically, you are conceding that you have no counter argument.

Support for Biden and the Dems means you do not possess that Catholic Faith. Hey Biden is doing a great job killing union jobs!

Father, are you still trying to sell that bridge you bought from Trump? Good luck! :)

Just goes to show that most "catholics" ain't Catholic. It is that simple.

When they do not adhere to principles held by the Faith since the very beginning (see Cordileone's citation of Barnabas if you disbelieve that statement in regards to abortion), then they are not Catholic, but only social circle wannabees who find tenets of the Faith optional.

So long as priests and bishops continue to allow these fake Catholics in the door (and generally only for the cash they represent), keeping in mind the Church formerly barred entry to such folk for good reason, they will continue to suck everyone else down into their disbelieving whirlpool and numbers of churchgoers will continue to evaporate.

What these "pastoral" pastors fail to see is that when what is on the inside of the church is the same as on the outside, then folk will rightly ask "then why bother going?", which they then rightly answer by staying home...with their cash.

Did anyone else notice how quickly the Republican argument shifted from “Those numbers are Fake News” to “Well, those numbers are real but I disagree on what they mean”? The third step in the argument is “Benghazi!” followed by “Shut up!”

You shift the goal posts all the time to protect the Party of Intrinsic Evil. You have no principles other than defending the Abortion Party at all costs. You avoid the substance of your critics arguments. Only a simpleton does not recognize that the political left and media allies are the ones telling their opponents to shut up because they cannot substantively debate their arguments.

Catholics who support pro-abortion laws are oblivious, or do not care, as to the aggression and violence associated with abortion.

Satan's fingerprints are on abortion.

Consider the behavior that the pro-abortion movement has exhibited throughout the years.

Pro-abortion rallies, as well as "protests" (disruptions, attacks), such as a couple of days ago at the Cathedral in Cleveland, have featured enraged, shouting speakers, foul language, obscene gestures...

Then there is the horrific, violent act that constitutes abortion.

In regard to abortion, everywhere one looks, he or she will find Satan.

But that doesn't matter to pro-abortion Catholics.


Republican legislatures for many years now have enacted laws in the hopes of reducing abortions; these were signed into law by Republican governors, only to have them struck down by judges who seem unwilling to allow even the most minimal of restrictions. Despite this, there has been progress due to pro-life efforts in that in many states there are now fewer abortion mills in operation. One notable achievement is Missouri, which does not have even one in-state facility performing abortions.
According to a 2020 report by Operation Rescue, “Reproductive Health Services Planned Parenthood in St. Louis was the last abortion facility in Missouri.” It is still open, but the report confirmed of “no abortion appointments” being made available at the facility “for months, and none are available anytime in the foreseeable future.” No appointments because Planned Parenthood refuses to comply with Missouri law.
The story on pro-life efforts is even better though. Nationwide, just in 2020, 45 abortion facilities closed or ceased performing procedures. Nine of these facilities were in New York , three in Washington,two in Connecticut and two in New Jersey. The cessation of operation of those facilities, and any reduction in abortions owing to that, had nothing to do with the Democrat governors or Democrat controlled legislatures of those states. Not all news is good however, since in a number of states there was an increase in abortion facilities.
One other thing to consider when it come to numbers is that California, New Jersey, New Hampshire, Maryland and the District of Columbia have not required abortion facilities to report on abortions that they perform. Maryland has not collected abortion data since 2006. I'm not aware of any change in reporting requirements for these states and the District but these have and do change according to actions of legislatures and state regulatory agencies..

The Centers for Disease Control and Prevention obtains its abortion data through a voluntary federal government-state partnership in which states are responsible for collecting and managing data in accordance with their own policies and systems, and submitting the information to the federal government. As a result, states ultimately determine the quality and availability of national, government-generated abortion data.
The primary responsibility for recording, collecting and managing data rests with the states' vital statistics agencies, which submit data to CDC on a voluntary basis. There is considerable difference among state laws, policies, forms and systems, and this does affect CDC's ability to determine accurately even the total number of abortions performed each year. Adding politics to the equation can complicate things even more. Non reporting,under reporting and misreporting by states have been noted when it comes to abortion stats. There have been years when there has been significant differences in the number reported by the CDC and other entities which compiles abortion statistics.

No sir, I did not mention fake news. I mentioned fake Catholics...ring a bell?
If not, because you do not hold yourself to be Catholic, are you just coming here to argue politics? No life, huh?
Frankly, the empty folk today idolize everything but God, whether a political party of any stripe, or sports team or pop "music" icon or movie star, and mainly all obsessed with sex symbols.

The biggest danger to our nation is corporate personhood!

Our Catholic faith, through the revelation of God, teaches us that human life begins at conception. Who can say or claim that
they have purchased their life, as if it is a possession they own to do with as they wish? No, human life is a gift bestowed by God in His creation of our being and nature. We can make our ethical and moral arguments to those of unbelief who have not our faith, but for those of faith,abortion is first and foremost an offense against our Holy and Sovereign God, and what offends God He has made known to us, and so we have no excuse, since what he has revealed and made known to us is within the grasp of our understanding. And what God has revealed to us is true since He is Truth, and this objective truth is not subject to opinion or dispute or arbitration whether by courts, legislatures, or presidents. Who among those who accept what God has revealed can counsel the taking of innocent unborn life, or argue that it's taking is in any way consonant with Divine love and mercy? Can this ever be the position of one possessed by true and holy faith? No, such a person is in need of much prayer and sacrifice to be given the grace to accept what is true and just.