IT’S OFFICIAL, ALTHOUGH IN PRACTICE SINCE THE 1970’S

My comments first: For years I have advocated for what Pope Francis accomplished today. That the ministries of lector and acolyte be opened to women in a formal way. I have advocated for years now, that there needs to be a codified way to admit men and women to these ministries and that the bishop is the one to install the laity into this ministry after proper screening and preparation.

As it concerns lectors at Mass, there is almost no mandate from the Church as it concerns who these volunteers will be (in terms of qualification, moral and academic) and no real program of ministry formation for these candidates.

In our diocese at one time, Extraordinary Ministers of Holy Communion had to have their names submitted to the bishop who would by letter commission them for a period of three years. That has fallen by the wayside without any official promulgation by our last two bishops.

It seems that this Willy Nilly approach to these liturgical ministries of lector and Communion Minister is coming to an end and thank God for that. 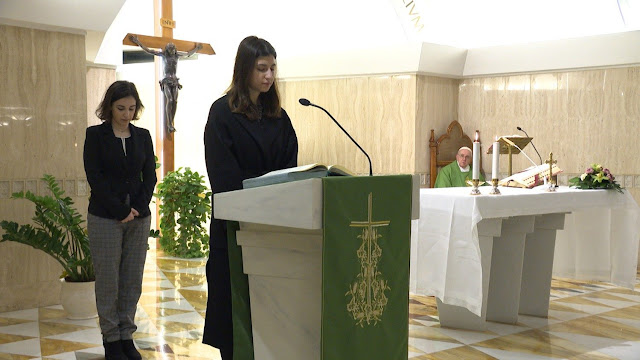 Pope Francis: Ministries of lector and acolyte to be open to women

Pope Francis changes the Code of Canon Law to institutionalize what is already allowed in practice: the access of lay women to the service of the Word and the Altar. The Pope explains his decision in a letter to Cardinal Ladaria.

With a Motu proprio released on Monday, Pope Francis established that from now on the ministries of Lector and Acolyte are to be open to women, in a stable and institutionalized form through a specific mandate.

There is nothing new about women proclaiming the Word of God during liturgical celebrations or carrying out a service at the altar as altar servers or as Eucharistic ministers. In many communities throughout the world these practices are already authorized by local bishops.

However, up to this point, this has occurred without a true and proper institutional mandate, as an exception to what Pope St Paul VI had established when, in 1972, even while abolishing the so-called “minor orders”, he decided to maintain that access to these ministries be granted only to men because they were considered to be preparatory to the eventual admission to holy orders.

Now, in the wake of the discernment which has emerged from the last Synods of Bishops, Pope Francis wanted to formalize and institutionalize the presence of women at the altar.

With the Motu proprio Spiritus Domini, which modifies the first paragraph of Canon 230 of the Code of Canon Law, Pope Francis, therefore, establishes that women can have access to these ministries and that they be recognized through a liturgical act formally instituting them as such.

Pope Francis specifies that he wanted to welcome recommendations which have emerged from various synodal assemblies, writing that “a doctrinal development has been arrived at in these last years that has brought to light how certain ministries instituted by the Church have as their basis the common condition of being baptized and the royal priesthood received in the Sacrament of Baptism.”

The Pope, therefore, invites us to recognize that what is under discussion are lay ministries “fundamentally distinct from the ordained ministry that is received through the Sacrament of Holy Orders.”

The new formulation of the canon reads: “Lay persons who possess the age and qualifications established by decree of the conference of bishops can be admitted on a stable basis through the prescribed liturgical rite to the ministries of lector and acolyte.” The specification “lay men” qualifying the laity and present in the Code until today’s modification, is, therefore, abolished.

The Motu proprio is accompanied by a letter addressed to the Prefect of the Congregation of the Doctrine of the Faith, Cardinal Luis Ladaria, in which Pope Francis explains the theological motivations behind his decision.

The Pope writes that “within the spectrum of renewal traced out by the Second Vatican Council, the urgency is being ever more felt today to rediscover the co-responsibility of all of the baptized in the Church, and the mission of the laity in a particular way.”

And, citing the Final Document of the Synod for the Pan-Amazon Region, the Pope observes that “regarding the entire Church, in the variety of situations, it is urgent that ministries for men and women be promoted and conferred… It is the Church made up of baptized men and women that we must consolidate, promoting forms of ministry and, above all, an awareness of baptismal dignity.”

Lay people and evangelization
In his letter to the Cardinal, after recalling the words of Saint John Paul II that “regarding ordained ministries, the Church does not have the faculty in any way to confer priestly ordination on women,” Pope Francis adds that “regarding non-ordained ministries, it is possible, and today it seems appropriate, to surmount this reservation.”

The Pope explains that “to offer to lay persons of both sexes the possibility of accessing the ministries of Acolyte and Lector, in virtue of their participation in the priesthood of the baptized, the awareness will grow, through a liturgical act (of institution) as well, of the precious contribution that many lay persons, including women, have been offering for some time to the life and mission of the Church.” He concludes that “the decision to confer these offices even on women, which entails stability, public recognition and a mandate on the part of the bishop, will make more effective everyone’s participation in the work of evangelization.”

This provision comes after extensive theological reflection on these ministries.

These ministries are situated within the dynamic of the mutual collaboration that exists between these two priesthoods, and their specifically “lay” nature has become ever more pronounced, in connection with the priesthood exercised by all the baptized in virtue of their baptism.

This entire article, including the citations attributed to Pope Francis, is a working translation from the Italian original.

A bad move for a number of reasons:

1. An instituted Acolyte can function as a subdeacon and may indeed be described as such. Although this only applies to the OF, one can envisage a woman vested in dalmatic/tunicle assisting at the altar.

2. At present, no priest is obliged to have a female server, even when no males are available. There are also many parishes which maintain all-male service in the sanctuary, and they will continue to do so. This is of course divisive, but division in liturgical matters is something we have lived with for fifty years. But why exacerbate it?

3. An instituted Acolyte is ex officio an extraordinary minister of Holy Communion (NOT an ordinary minister!) and unlike other EMHC may assist in the purification of the sacred vessels. There is room here for confusion of roles.

4. Although Paul VI seems to have envisaged the ministries of Lector and Acolyte as being permanent as well as transitional, bishops have been reluctant to confer them (fewer jobs for the girls). Expect now a whole slew of women elevated to these positions, far more than men.

5. These ministries served as a bulwark for the diaconate. There will be increased pressure for women deacons, and as the Church of England has shown, women deacons will not rest until they are priests and even bishops.

Be careful of what you wish for. Despite this dysfunctional pontificate, there have been positive developments at grass-roots level. Younger priests and bishops are unencumbered by 1960s baggage and liturgical life is slowly but surely recovering.

The poster at 8:56 AM is correct. There will be a greater push now for women deacons and priests.My parents who lived in the Archdiocese of Milwaukee would have at their parish a woman who would read the gospel and give the sermon. When people, not my parents, would write to the archbishop, then Rembet Weakland, a great promoter of woman's ordination,he would answer. "she is not preaching. Only bishops, priests and deacons can preach. She is giving a reflection on the gospel reading."

If we must open the ministries of Lector and Acolyte to women, identifying them as lay ministries rooted in our common baptism rather than as clerical or semi-clerical ministries attached to the priesthood, then I would suggest that they should be vested in a suitable gown that clearly identifies them as laity. Both the cassock with surplice and the alb are unsuitable for this; they are too clerical. I would recommend either the Oxford university Post Graduate (Advanced Student) gown or the common MA gown, both with suitable civilian attire underneath.

In his letter to the Cardinal Ladaria, after recalling the words of Saint John Paul II that “regarding ordained ministries, the Church does not have the faculty in any way to confer priestly ordination on women,” Pope Francis adds that “regarding non-ordained ministries, it is possible, and today it seems appropriate, to surmount this reservation.”

I believe as well that suitable dress must be specific and codified for these ministries. While Fr. Forte’s position is one option, I think we could make an apologetic that the white alb without cincture could be seen as a type of baptismal garment.

General guidelines for appropriate dress for these ministries don’t work. Just look at the second person behind the lector in the photo on this post. Sunday best means so much to so many, from flip flops and shorts and tank top to coat and tie and formal dress for women. High high or low the hemline? How tight the jeans? How skimpy the shirt or blouse. Not to mention our tee shirt culture in the USA with all kinds of slogans. What slogan is inappropriate? To some “Trump is not my President” all the way to “eat my grits” would be quite allowable as well as ads for whisky and drugs. I saw a man enter the church with this on the back of his shirt. “I’m a big stud, check my package!”

Yes, that happens in the Ordinary Form!

I have mixed opinions on this. First is that from what I understand big mistake) is that the priest has the option to have a lay person do the readings. I have not in recent decades been to a Mass where the priest has not used a lay person for the readings. If the priest did all of the readings on occasion, I would feel better about lay people doing the readings. My wish would be that the OF Mass could take on more of the characteristics of the TLM. The second part I have pondered is if the Mass is a male expression of the Church. Priests are male, deacons are male, altar boys were male. I don't think it is right that the sanctuary follow the gospel of Gloria Steinem. That is where female readers (Lector), and Eucharistic ministers, and now Acolyte have their origin. Pope Francis is following Joe Biden, rather than Joe following the Pope. None of this denies the roles that women have in the Church and in the church during Mass and in the preparation of Mass.