THE MORTAL SINS OF THOSE USING SOCIAL MEDIA 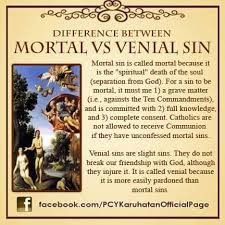 Untraddies may not know this, but traddies know that for a sin to be a mortal sin, three things are necessary: 1. Serious matter; 2. One knows that it is serious; 3. One commits the serious sin with full consent of the will (and usually with forethought and planning).

If any sin, that technically can be called mortal, lacks any of these three, the sin is a venial sin, no matter how heinous the sin might be. It is still a sin, but not mortal.

If someone advocates for the killing of innocent human beings, born or unborn, or advocates for others to be able to do the killing, like getting a HITMAN as Pope Francis would describe it, that is quite serious. If they do not know that, and were under the influence of a cult leader, drunk or mentally ill, it is not a mortal sin, it is a venial sin but in civil law they could be sent to prison, because in American civil law, ignorance of the law is no excuse.

Let’s say that a person who does not know in fact about something, states that so and so priest has never preached about racism (and makes such a bold statement as to infer, that just because he hasn’t heard it, it must be true) and says that to falsely denigrate the priest, thus a lie and detraction also, that is a serious sin. Now if the poor soul is so ignorant of his Catholic faith that he doesn’t know that and he’s in a fever pitch of compulsion and libels that unthinkingly on a southerner’s blog, then it is a venial sin not a mortal sin. But if he fulfills the last two requirements, it is a mortal sin.

I have blocked one commenter here because of that person’s hateful remarks usually revolving around the one sin that strikes terror in that person, sodomy. He calls may church leaders sodomites, even when they aren’t. And thus the use of the term sodomite for this person is similar to how some people use the “N” word, to denigrate people. When false it is both libel and slander. In terms of the word sodomite, when used against someone who isn’t it is also gossip and detraction. It is a lie too. This person uses the term against anyone who has same sex attraction and again is like the ‘n” word, even if the homosexual is chaste or celibate. And beside this, the label is chosen without any proof, unless of course it is proven.

But sodomy is not only the sin of homosexuals who do it, but also of heterosexual men who do it with their wives or girl friends. The person to whom I refer doesn’t use sodomy in the full understanding of it, that person uses it only towards homosexuals or those to whom this person thinks has sympathies for homosexuals. That is a mortal sin, when all three criteria are fulfilled. If one, two or three of the criteria are missing, it is a venial sin.

I hope this helps the ignorant (as the Church must instruct the ignorant) and those who may be heterodox through no fault of their own, or simply choose to be untraddies.

Well, the folk on social media and internet in general are in a serious state of sin on a regular basis due to their consuming greed for hearing the latest news and gossip, along with hoping to be the first to pass it along and so be esteemed in the eyes of others, which is rank pride and seeking honor.

This is a regular state of affairs and is an addiction supplanting rightful owed love, worship, and prayer to their creator, which is also idol worship, and pretty much anyone who argues this not the case with selves and others is aĺso a liar.

The day you can announce you spend far more time in prayer than you do on the internet, and that the majority of your life is absorbed with loving God vs being worked into a frenzy over what you see on your blue screens of death, is the day you MIGHT not be in a state of mortal sin in regards to techno media.

It is not a mortal sin if true addiction. Could be sloth in regards to other things. Comparing time in prayer or good works a false equivalence.

I have crticized the pope on social media, but I have tried to restrict my criticisms to his policy. I have also said--as is verifiable from the members of the St. Gallen Mafia's public remarks--that there could be some doubt whether his election is canonically valid. I certainly hope I have not committed a mortal sin in doing so. I am trying to balance this with the possibility that he could validly be the Holy Father.

I am extrememly disgusted with the majority of US Bishops. I have expressed that. However, I also insist there are some good ones. Is that a mortal sin?

If I tell my friends to let their voices be known to the bishops peacefully and patriotically, am I guilty of ecclesial insurrection and inciting voilence? Sorry,, Ijust had to put that in there)

I think with the internet where you don’t hear or see how the person making claims is framing the claim, that we have to be more careful in castigating people.

I have as a rule on my blog to debate issues or actions but not to denigrate people. That applies to every person pope, bishop etc or not.

So yes, when it come to non infallible issues, those of discipline or outside the boundaries of Church authority, we can make critical remarks about what is said or taught by anyone in the clergy including the pope. But it is a sin against charity to denigrate the person of anyone, especially the pope, given his role in the church because of actions or comments anyone makes. Deal with issues charitable even when being critical.

The worst sin of all is corporate personhood! THAT is our biggest threat!

Gotta disagree strongly with your comment as to it not being a sinful activity, by and large.

We are judged at death in an accounting of every squandered moment of our lives and that every moment not spent for what we were created, knowing/loving/serving God is an offense to our creator. So have affirmed too many saints, preachers, bishops, popes, etc.

And nothing else today comes close in squandering that precious and limited time than does modern media obsession, which we seek wilfully and with full consent, not to mention all the sinful passions we willingly stoke with its use.

You well know the seeking of latest news and gossip was formerly listed in an examination of conscience prior to Confession. It was in the missals, and remains in reprints today.

When standing before God at the judgement, the greatest terror to all, self included, will be in facing the fact of just how much my God who only asks for returned love was utterly ignored the entire day.

Your comment is far too broad, although you do use some specifics and in those cases you are correct. But people have free time and do a number of things in their free time which are morally neutral. Swimming, going to the beach, naps, hunting, fishing, etc. For some the use of the internet in lieu of watching TV or listening to the radio, or music, etc is their form of diversion. The social media including blog comment sections connects people to each other. One can debate the merits of “on-line” communities, but a cause for eternal judgement, I think not unless the community foments hate and division and contradicts Holy Mother Church, the Deposit of Faith and the Ordinary and Extraordinary Magisterium of the Church, that of the pope alone or the pope and bishops together, even in a Pastoral Ecumenical Council such as Vatican II.

Your comment as stands, strikes me as rigid and severe and a bit Jansenistic.