RELIGIOUS ART AS DEPICTED BY CATHOLIC AND PROTESTANT ARTISTS

I can't actually describe it verbally, but I know it when I see it in painting and stained glass. Catholic art in these two venues has a distinct Catholic ethos or piety, whereas Protestant art has its own distinct ethos or piety. The two are clearly different even when depicting the same event.

This is the Baptism of the Lord depicted in Catholic Art: 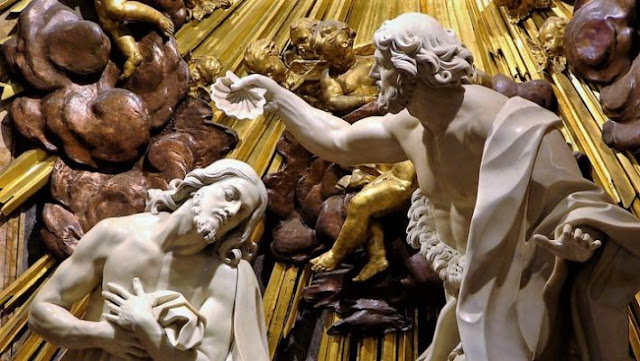 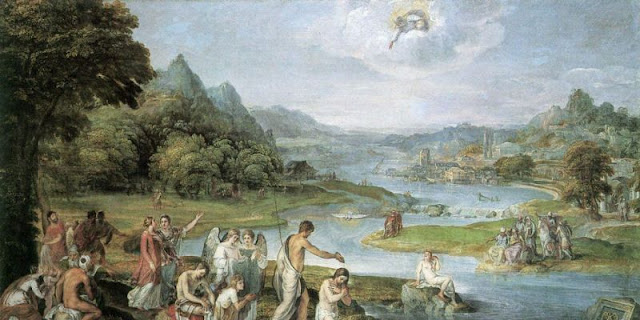 This is the Baptism of the Lord as depicted in Protestant art: 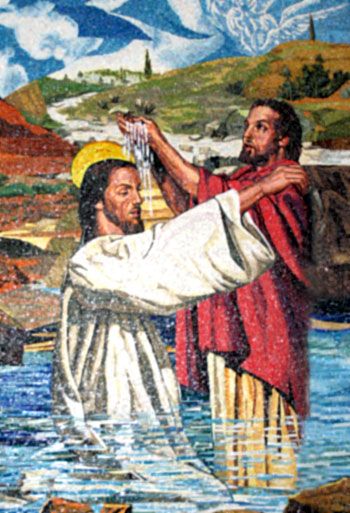 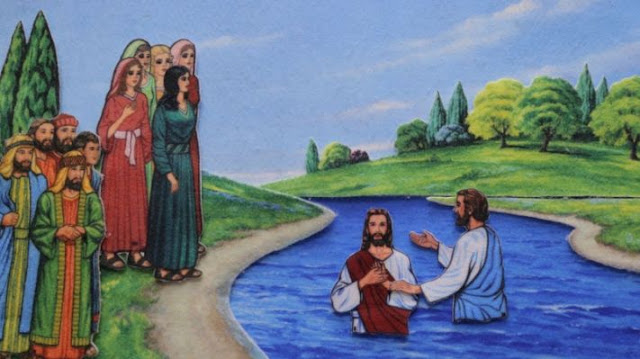 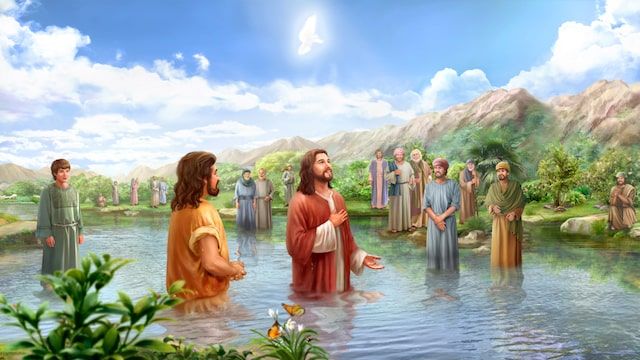 It seems the protestant version attempts to introduce a western realism perhaps to make it more relatable. To me, and when done, this results in a children's picture book effect. I don't care for it.

I'm no art critic, but I think a regular guy like me can at least see that the Catholic art has much more precision and realism than the protestant stuff--not that the protestant stuff is bad. The artists who produced the last 3 certainly have talent--but it seems to have a sort of "comic book" aesthetic.

There is a certain look that the cults use in their religious art and this isn't quite there, but pretty close. I can remember walking into the headquarters of the Rosicrucian Fellowship in Oceanside, California and seeing this kind of stuff in their literature. Anyone who has ever been inside of a Mormon place, seen their literature of looked at a copy of The Watchtower will see the same kind of "look".

Obviously, I'm biased and I like the Catholic stuff better. But there's a place in our culture for comic books--and protestant art too.

Also...the Catholic art seems to reflect more of a mystical/supernatural relevance to the event depicted (The Baptism of Our Lord). Is this suggesting that Protestantism eventuates in reducing Jesus to being merely a man? I'm not qualified to say. What say YOU Father?

From the examples that you have given, I would say that Catholic art is dynamic while Protestant art is static. Perhaps this is a reflection of the Catholic belief in the efficacy of grace vs. the Protestant denial, reducing the Gospel to a mere memorial and acceptance of an historical event.

Well, the truth of the matter is that there is very poor Catholic art and always has been, while many protestant efforts have reached universal iconic status and are found even in Catholic homes and churches.

You should take a stroll through an old set of the very protestant The Bible Story, not a new version with revised art. I grew up reading that 12 or whatever volume set as a child, end to end, too many times to count, and it is a huge mix of mediocre and quite fine art, FOR ITS PERIOD, and illustrates the stories from Genesis to Revelation quite well.

ANY art compared needs to be representative of what was done IN A SPECIFIC PERIOD to be a valid comparison. Henry VIII had some mighty fine art done.

(I do not capitalize protestant but do so on legitimate names of denominations, the P word far too nebulous and makes as much sense as capitalizing Black and White, all are descriptors and not proper names, and I do not care what common usage does, wrong is wrong....all by way of saying no disrespect to Methodists, Baptist, etc...am a former protestant myself.)

These are different era, schools, and artistic perspectives in addition to the Protestant perspective. The Protestant version look to be intended for a storybook or text book. The Catholic versions look to be destined for public view. The eye and light would be totally different.

By the way, on a second look the Protestant art does not capture how Christ humbled Himself.

The imposition of Protestantism during the reign of Edward VI (1547-1553) was carried out with ruthless efficiency and resulted in the destruction of most of late medieval English art. There was no 'Protestant art' to replace it until much later.

The German Lutherans were less iconoclastic. The works of the great sculptor and woodcarver Tilman Riemenschneider of Würzburg (1460-1531) can be seen to this day in both Lutheran and Catholic churches. The naturalism of the figures appealed to both Catholic and Protestant sensibilities.

If there is an iconic piece of Protestant art it is probably William Holman Hunt's 'The Light of the World' (1851-1853). The same artist's 'The Hireling Shepherd' is also significant. The Gothic revival affected both Catholic and Anglican tastes. Stained glass of the Victorian period isn't particularly 'Catholic' or 'Protestant'.