YIKES! POPE FRANCIS HAS ANOTHER ONE OF THOSE "CHRISTMAS GREETINGS" TO HIS "MOST BELOVED" ROMAN CURIA! ANY INSULTS, NAME CALLING OR BOMBSHELLS? I DON'T KNOW AS I HAVEN'T READ IT BEFORE POSTING; SO READ IT WITH ME!

The looks of the two archbishops flanking Pope Francis says it all, doesn't it?

Press here for John Allen of Crux take on who the pope is accusing! 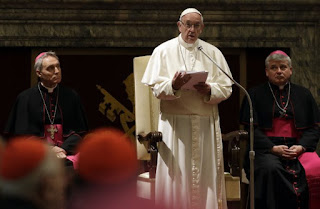 UPDATE: This is the "VATICAN INSIDER, LA STAMPA" headline: 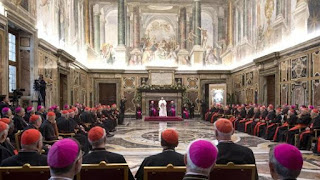 Now, I have had the time to read it and yes, there are some very pointed remarks which I have highlighted in RED in the pope's text below!

I think the bombshell remark that seems directed to Cardinals Mueller, Burke and maybe Sarah are these:

Here let me allude to another danger: those who betray the trust put in them and profiteer from the Church’s motherhood.  I am speaking of persons carefully selected to give a greater vigour to the body and to the reform, but – failing to understand the lofty nature of their responsibility – let themselves be corrupted by ambition or vainglory.  Then, when they are quietly sidelined, they wrongly declare themselves martyrs of the system, of a “Pope kept in the dark”, of the “old guard”…, rather than reciting a mea culpa.  Alongside these, there are others who are still working there, to whom all the time in the world is given to get back on the right track, in the hope that they find in the Church’s patience an opportunity for conversion and not for personal advantage.  Of course, this is in no way to overlook the vast majority of faithful persons working there with praiseworthy commitment, fidelity, competence, dedication and great sanctity.

I stopped reading because all I kept thinking was ....... did this guy do acid in the ‘60s. Talk about the pot calling the kettle black. I would be really interested in a study being conducted by a faithful Catholic doctor on the mental health of Pope Francis.

John Allen's inside knowledge tells us the following:

"Quoting a famed 19th century Belgian papal statesman named Frédéric-François-Xavier De Mérode: “Implementing reforms in Rome is like cleaning the Egyptian Sphinx with a toothbrush.” (The line did not, for the record, draw a laugh from the pontiff’s audience Thursday morning.)

When I read the speech, I thought it was a funny Italian way to state the negative and usually in Italian, you can tell when it is meant to be funny.

So two things are possible, the pope in Italian delivered it in a way that did not make it sound funny or the mood of the curia is such that there is desperation, depression and fear and anxiety and concern and consternation and, well you know, the end of the world!

The pope yells at people a lot, but what is he doing about it? Hes the boss, according to his temarks, so if someone is not doung his job, he can fire him. He has had no reluctance in firing people for being disloyal, so why not for incompetence or corruption? He’s not afraid to upraid them, so can he be afraid to fire them,

Santita is a good one to talk: he serves Mammon and the left-wing loon political causes that have nothing to do with the One, Holy, Roman, Catholic and Apostolic Church. Hopefully he will undergo conversion or be gone soon.

Why does he do this in public? This seems sort of lame. Call the cardinal in for a one-on-one and tell him what you think. If he persists then pull his staff away from him and cut his budget. If he keeps going THEN fire him. And by the way, different people can have different opinions and style, it does not mean they are out of synch with the Holy Spirit although that might be an issue. This all sounds sort of Charlie Sierra to me.

rcg, because he lacks class.

If the Pope wanted to do the right thing he would send Pesident Trump a thankyou note for the following things he did to advance the pro-life cause:

In his first week, Trump reinstated and expanded the Mexico City Policy that blocks some $9 billion in foreign aid being used for abortions.
Worked with Congress on a bill overturning an Obama regulation that blocked states from defunding abortion providers.
Published guidance to block Obamacare money from supporting abortion.

He won't do this of course. I will always remember Francis as the Pope who yucked it up with Abortion King, Obama, the most rabidly pro-abortion president in US history.


Perhaps one could conclude that this is not a way to manage people.


"The relationship between Rome and the East is one of mutual spiritual and liturgical enrichment."

Sorry, but, particularly in the last 50 years I don't see how. Earlier than that and in the U.S., the Eastern Churches were treated terribly by the Roman hierarchy, Latinizations crept into both the churches and the liturgy resulting in the loss of traditions such as the married priesthood (recently restored), an authentic Byzantine experience as well as schisms that led thousands back to Orthodoxy. True, the Roman Church has developed an appreciation for iconography but, I'm hard pressed to readily identify other points that one could label as "mutual".

I thought he may have been coming down on Burke but it turns out it may (rather) be his confidante, Cardinal Maradiaga.