VAGUE GENERALITIES FROM A CEO CREATE MORE PROBLEMS THEN IT SOLVES 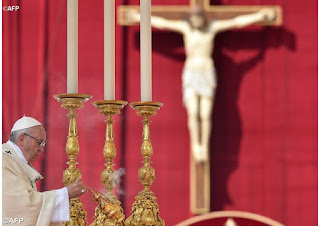 "Making wide-ranging, scathing criticisms of human ambition and treachery -- but without actually identifying any violator by name -- has the effect of causing everyone to question themselves: "It is me, Lord?" In this way, the accuser exerts power over all others by instilling in them fear and self-doubt."

And this is what Pope Francis did at his Christmas address to the Curia. But who are the bad guys. The immorality of General accusations is that it places the innocent under suspicion and provides cover for the guilty. It is also extremely manipulative! It is unbecoming of the Vicar of Christ to do this, no?

Who are the guilty? Burke? Muller? Sarah? Maradiaga?

'Degraded logic of small cliques.' This from a man who surrounds himself with cronies like Fernandez, Spadaro, Forte and Baldisseri. Physician, heal thyself!

I can be silent no longer. I flat out do not think the Holy Father is all that holy. I wonder at times if the Holy Spirit was otherwise busy that day when the white smoke went up. I realize this is not all that appropriate to post here. I just have to trust, believe, have faith, and pray that as always, God knows best. Merry Christmas to all!

"Holy Father in mercy and justice name the guilty don't cast doubt on the innocent!"

Would that you, Fr. McDonald, would expect the same from the anonymous accusations made by many of those who post comments here.

Hey, I only thought Jessee Jackson was a "poverty pimp" who could make millions off of "serving the poor." This disease is now striking "liberals" in the Church. Kavanaugh hardest hit!!!!

Maybe the cardinal is a shirt tail relatives of the Perons!!!

Somewhat ironic that he who complains about anonymous accusations is himself anonymous.

Tom Makin: Behind the faux humility, Bergoglio is an ambitious politician with a vindictive temper, a habit of bearing grudges, and a disinclination to let anyone or anything stand in his way. Even his erstwhile admirers are beginning to realize this - the evidence just keeps on piling up.

If this sort of thing keeps up, maybe we're all going to have to stop worshiping the pope and instead start placing our trust in tradition, treating the pope merely as tradition's guardian. What if the pope doesn't really even have any apostolic authority to promote social, political, liturgical or moral novelties? Where would that leave us?