IN THE NEXT PAPACY WILL THERE BE HOPE FOR THE FOLLOWING? 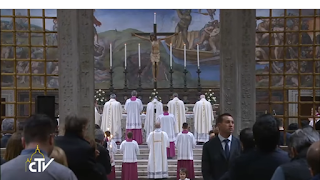 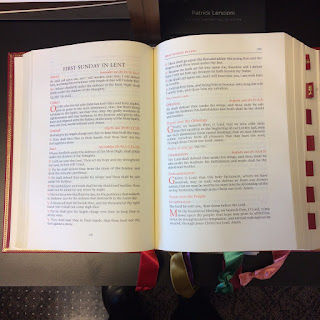 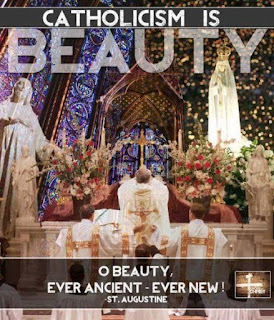 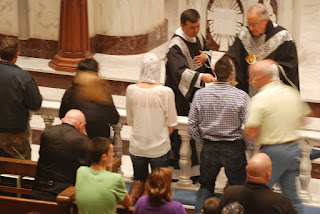 While Pope Francis hasn't undone the direction of the refinement of the Ordinary Form of the Mass completely, only taken a detour that another pope could merge back into the direction of renewal that Pope Benedict initiated, what would that merge look like when a new pope initiates it?

1. A return to the best of the beauty of vesture for the liturgy, not the bland look of the 1970's

2. A return to kneeling for Holy Communion

3. A return to ad orientem

If no other restorations take place but these three things for the Ordinary Form of the Mass, which are not in fact forbidden unless the local bishop forbids it, we could easily recovery the renewal that Pope Benedict desired for the Mass.

Of course, ultimately the template of the Ordinariate's Divine Worship, the Missal is the path for the future and I would say the near future.

The status quo of the Extraordinary Form of the Mass remains under the current pontificate and with the Ordinary Form's spirituality, reverence and devotion brought closer to it, we could see a pleasant unity between the two without sacrificing the good in both.
Posted by Fr. Allan J. McDonald at Saturday, December 16, 2017

A bishop cannot forbid the following, since they are universal norms:-

Ad orientem in the OF is a different matter, since neither orientation is mandated; versus populum is in practice normative, while ad orientem has the weight of tradition behind it. However, a good bishop would not want to impose his personal preferences on his diocesan clergy. Last year Cardinal Nichols (Westminster) openly criticized Cardinal Sarah for advocating ad orientem, yet when celebrating Mass at (say) the London Oratory does so in the traditional orientation. Bishop Slattery (Tulsa) celebrated ad orientem in his cathedral but did not compel his clergy to do likewise.

A bishop may prohibit Communion in the hand in his diocese (a few have) or forbid female servers, since higher legislative authority says he may do so; he may not require any priest, let alone any parish, to have female servers, since this was made clear in the legislation which (somewhat reluctantly) legitimized the practice. This is understandable since both Paul VI and John Paul II explicitly ruled it out.

On the other hand, a priest may not insist on kneeling Communion and Communion on the tongue in his parish (although he may encourage it) if the bishop permits it. This does not apply, of course, in the EF.

Yet, you may argue, a bishop can make life difficult for a priest who disregards his whims. The answer to this is, if a bishop resorts to bullying and intimidation when he is acting ultra vires, he is ipso facto a bad bishop, just as an employer who rides roughshod over the rights of his employees is a bad boss. Bad bishops, like all bad employers, need to be held to account - I know it's not easy, but it must be done.

While universal norms, these are viewed by most as the idiosyncrasy of those who promote them. That can only be removed through legislation so that the non use of Latin, facing the people and standing for Holy Communion are marginalized.

If I have the backing of the Holy See and my bishop and it is being done across the diocese, then we will be going somewhere, but not until then.

Nice to see the picture of St. John XXIII, author of Veterum Sapientia, stating that "Latin is the language which joins the Church of today." Notice, he didn't say Latin joined the Church of the past as some who post here which it said, as they wilfully and contumaciously ignore Veterum Sapientia. I guess some papal teachings are more equal than others in liberal world.

"A bishop cannot forbid the following, since they are universal norms:-

Nor does he have proper authority to forbid ad orientem OF celebration throughout his diocese--cf. the ruling in Mother Angelica's appeal of a versus populum directive by the Bishop of Birmingham, AL (issued under heavy pressure from USCCB heavyweights). Of course, a local bishop has the practical power to do things for which he lacks proper authority. Just as Paul VI had the power but not the authority (according to Card. Ratzinger) to impose a Novus Ordo of Mass in place of the traditional order.

Incidentally, in one diocese where some pastors are individually introducing ad orientem at some of their parish Masses, it's alleged that the bishop had advised them that it would not be prudent for two consecutive Masses on a Sunday be ad orientem, less people be effectively denied a choice.

The Holy See is not going to reserve to itself decisions which have already been delegated to bishops. To what extent the vernacular was to be permitted in the liturgy was left to the bishops; and since 1967, when the Canon was allowed in the vernacular, an all-vernacular Mass has been a permissible option.

Even in a bastion of tradition like the London Oratory, of the five Masses scheduled on a weekday, three are entirely in English, one is a 1962 Latin Mass, and one is an OF Mass in Latin (except for the Scripture readings). Admittedly, none is versus populum, and in this particular parish (as in some others) Communion is distributed at the rail, the communicants kneeling.

The principal Mass on Sundays and Holy Days is always Solemn Latin and usually in the Ordinary Form. One of the reasons for the Oratory's popularity is its dependability - you know what you are going to get, and those who habitually attend one of the English Masses out of preference know it will be celebrated reverently.

You might think that this caters for all liturgical tastes, but of course it does not. Those who like to gaze on the priest's face, who insist on Communion in both kinds, who rejoice to see altar girls flicking their hair in the sanctuary, who welcome lay folk in street clothes milling around the altar as a sign of 'inclusivity', who think that Dan Schutte and Marty Haugen are oh-so-cool, who have a fit if they see a lace alb or a Roman chasuble; they are not going to darken the Oratory's door. Never mind - they won't have any difficulty in finding what they want elsewhere.

I can understand priests of Fr McDonald's generation not wanting to implement changes, however desirable in principle, which will generate controversy and may well be reversed by his successor when he retires. Perhaps that is best left to a younger generation. However to say 'I'm not doing anything until a) the Holy See explicitly mandates it and b) everyone else does likewise' ignores the fact that (a) isn't going to happen and (b), if applied across the board, would guarantee inertia.

Most of our "bishops" would have slept through the Sermon on the Mount. Probably half of the US bishops are not orthodox, so it's no surprise. I have zero confidence in the USCCB otherwise known as the Democratic Party at Prayer. That alone, should frighten the faithful since that Party promotes intrinsic evils like abortion and gay marriage.

TMJ: "Probably half of the US bishops are not orthodox"

Are you conceding in a weak moment that half of the U.S. bishops may be orthodox Catholic believers?

I suspect the younger generation of orthodox well-formed priests are just about equally concerned with what the corrupt current Holy See thinks and what the older generation of malformed inertia-bound priests think.

The next papacy depends upon how many cardinals the present papacy appoints.

As a rule, conservatives are open to, though critical of, liberals, while liberals are closed to, and disdainful of, conservatives. Hence, our situation.

I'll echo Rood Screen: "The next papacy depends on how many cardinals the present papacy appoints".

I'll also say again, without restoration of ad orientem posture, the impactfulness of any other liturgical reform which is attempting to reclaim tradition will be compromised.

Henry! Probably wishful thinking that at least half of the pre-Francis bishops might be! My bad.

Leo XIII had plenty of time to pack the College (1878-1903) but his favoured successor, Rampolla, was passed over.

The more Francis appears to flirt with heresy, the less likely the next conclave will be to elect anyone who will continue his agenda.

Rampolla was not passed over. He was vetoed by Franz Josef I.

Wrong. The Archbishop of Cracow turned up with the imperial veto, there was a tussle with Merry del Val, secretary to the conclave, in the course of which the document fell to the floor. The Archbishop insisted on reading it out, to the mounting indignation of the other cardinals. The result was a surge in support for Rampolla, but it was not enough.

One of the first acts of the new pope (Pius X) was to outlaw any lay interference with a conclave.

This morning I drove to north Oxford (40 minutes) to sing at a Missa Cantata in the Old Rite. There was a choir of young people who sang a polyphonic Ordinary and two motets. Three of us sang the Propers (most choirs can't handle chant and I don't do polyphony) but the combination of plainsong and polyphony was compelling. The congregation consisted of older people like me and younger people with children. Plus a few in between.

If someone had suggested even 25 years ago that it would be possible for me not only to attend the Mass with which I had been brought up, but also to sing the all-important Propers as per the Graduale Romanum, I would not have believed them. And yet I can do this every week. Yes, mastering the chant took some years of effort, but it was worth it.

Machinations in Rome really don't matter. What happens on the ground is what counts.