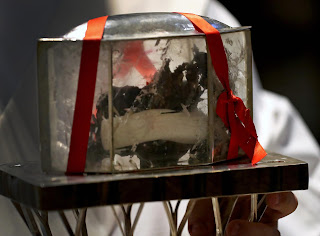 VATICAN CITY –  The Vatican's saint-making office has updated its procedures for authenticating and conserving relics for would-be saints, issuing new rules that govern how body parts and cremated remains are to be obtained and venerated.

The instruction issued Saturday explicitly rules out selling hands, heads, teeth and other body parts of saints that often fetch high prices in online auctions. It also explicitly prohibits their use in satanic rituals.

Officials said the instruction was necessary to update the church's 2007 rules given some obstacles that had emerged when families and the church didn't agree on what to do with the remains of a saintly candidate. One current case is before a U.S. appeals court in the battle over the remains of Fulton Sheen, a prominent 20th-century American bishop.

This appears to be an un-cited news report, unless you are presently visiting Rome.

I thought it had long been unlawful to sell or divide saintly relics.

VATICAN CITY (AP):
The Vatican's saint-making office has updated its rules governing the use of relics for would-be saints, issuing detailed new guidelines Saturday that govern how body parts and cremated remains are to be obtained, transferred and protected for eventual veneration.

The instructions explicitly rule out selling the hair strands, hands, teeth and other body parts of saints that often fetch high prices in online auctions. They also prohibit the use of relics in sacrilegious rituals and warn that the church may have to obtain consent from surviving family members before unearthing the remains of candidates for sainthood.

Officials said the guidelines were necessary given some obstacles that had emerged since the rules were last revised in 2007, particularly when surviving relatives and church officials disagreed. One current case before a US appeals court concerns a battle over the remains of Fulton Sheen, an American archbishop known for his revolutionary radio and television preaching in the 1950s and 1960s.

Sheen's niece went to court to force the archdiocese of New York to transfer Sheen's body from under the altar of St Patrick's Cathedral to Peoria, Illinois, where Sheen was born, ordained a priest and where his sainthood cause has been launched by Peoria's bishop.

The New York archdiocese refused and appealed a 2016 lower court ruling in favor of the niece. A decision from the appeals court is expected soon.

Monsignor Robert Sarno of the Vatican's Congregation for the Causes of Saints said it's impossible to know what difficulties could complicate a saint-making case or whether the new guidelines might have helped avoid the legal battle over Sheen.

But Sarno said the Vatican believed the updates were needed anyway to provide bishops around the world with a detailed, go-to guide in multiple languages to replace the Latin instructions that provided only general rules to follow.

New to the protocols is a section that makes clear that bishops must have the "consent of the heirs" in regions where the bodies of the dead legally belong to surviving family members. The revised instructions lay out in detail how a body is to be unearthed, saying it must be covered with a "decorous" cloth while a relic is being taken and then re-buried in clothes of similar style.

The guidance also explicitly allows for cremated remains to be used as relics. For most of its 2,000-year history, the Catholic Church only permitted burial, arguing that it best expressed the Christian hope for resurrection. But in 1963, the Vatican explicitly allowed cremation as long as it didn't suggest a denial of faith about resurrection.

The new instruction also makes clear that bishops must agree in writing to any transfer of the remains, and calls for absolute secrecy when a body is unearthed and a relic taken for eventual veneration.

The document repeats church teaching that relics from candidates for sainthood can only be venerated publicly once they have been beatified, the first step to possible sainthood.

"The Vatican's saint-making office has updated its procedures for authenticating and conserving relics for would-be saints, issuing new rules that govern how body parts and cremated remains are to be obtained and venerated."

Cremains are the mortal remains, just as bones, teeth, and hair are. Why would there be any difference?

"You shouldn't fall into the 'sins of communication:' disinformation, or giving just one side, calumny that is sensationalized, or defamation, looking for things that are old news and have been dealt with and bringing them to light today." - Pope Francis