I LOVE GOOD LITURGY WITH A GREAT AND CREATIVE PRESENTATION OF THE OFFERINGS! 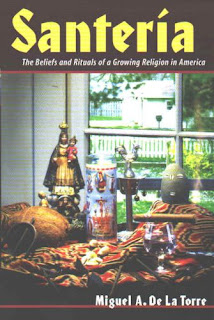 He was looking for shark teeth, but found a basketful of headless birds instead
BY EMILy weaver

A basket full of decapitated birds, fruits, vegetables, candles and a picture of an old lady washed ashore Sunday evening near the 2nd Avenue Pier invoking an odd call to the Myrtle Beach police.

Officers spoke to the caller, who told them he was looking for sharks teeth when he came across the basket of deceased birds that had washed up on the sand, according to a police report.

Officers said they saw a chicken, a pigeon and another bird - all missing heads - in the brown basket, along with a mixture of fruits, vegetables, candles and the photograph.

Police called city services to gather the dead animals, according to the report.

The city services employee told police he believed it was a type of religious sacrifice that he had seen before in previous years around this time, the report stated.

“It is believed to be Santeria,” police said.
Posted by Fr. Allan J. McDonald at Tuesday, December 12, 2017