AM I JUST A PAPAL NERD OUT OF TOUCH WITH THE MUNDANE PAPACY FOR THE 21ST CENTURY? 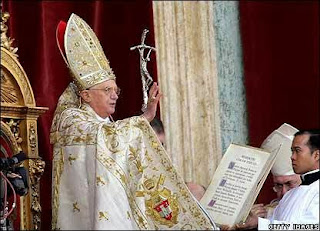 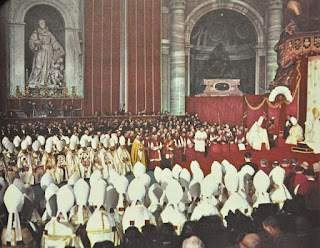 Cardinal Mueller gave an interview some weeks back but the entirety of what he said I only recently saw. And so much of what His Eminence says, I agree! Am I that out of touch with the modern papacy and modern Catholic Church?

Here are some of His Eminence soundbites:

(Cardinal Mueller) added that he did not like Pope Francis' method of government, including his attitude towards the Curia.

The German cardinal also criticized Pope Francis' general style of governing, claiming there should be a greater emphasis on teaching and less on highly publicized breaks from tradition, including rejection of the traditional red papal shoes or living in the papal residence.

"It would be better to hear the Pope's message of faith instead of making the papacy popular with secondary attention-grabbing elements — with black shoes, Santa Marta ... ."


In December 2016, he clarified that Pope Francis' document, Amoris Laetitia, must be understood in the context of the continuous teaching of the Church, emphasizing that it "should not be interpreted as if the teachings of earlier popes and the Congregation for the Doctrine of the Faith on the subject were no longer binding."

He also added that "contrition, confession and reparation are the three necessary elements for absolution" before a person can lawfully receive Holy Communion.

Last year, he criticized the widespread celebration of the 500th anniversary of the Protestant revolt, saying there is "no reason" for Catholics to celebrate the biggest rupture of Western Christianity.

He has also since hinted that Francis' pontificate "lacks theological rigor."

In the 1970's liberal seminary, I was schooled in the worship of a dead Hero, Jesus Christ, from His birth in a humble stable to His public ministry and care for the poor, sick and marginalized. And while these remain the ministry of our Risen Lord and through the Church, He reigns in glory from the splendor of heaven giving the poor, marginalized, sick and destitute hope for something better than the poverty of an animal stable or the wood of the Cross! Suffering is not what heaven is about, the splendor of heaven gives hope to our suffering.

Thus the regal papacy, the splendor of the Vatican and the like speak of heaven and of the monarchy of the benevolent Monarch, Christ the King.

I saw this in Pope Benedict's regal papacy, not so much in John Paul II, but certainly in Blessed Pope Paul VI, Saint Pope John XXIII and Venerable Pope Pius XII, popes since I was born.

It isn't wrong to emphasize heaven as long as the Church cares for the poorest of the poor, the lost soul and those on the wide road to damnation. Usually the poor in material goods are not the most poor as it concerns their salvation.

Give me Jesus the Risen Lord's Regal Papacy, the Risen Lord who reigns now, NOT the mundane papacy of the dead Hero, the Jesus of Nazareth and the desire to return to the past history of that time. Let's live in the glorious history of the Resurrection and our Glorified Risen Lord.
Posted by Fr. Allan J. McDonald at Tuesday, December 05, 2017

"Am I that out of touch with the modern papacy and modern Catholic Church?"

I agree with your sentiments, Father. He always seems to be reacting against some secret enemy which only he perceives and which is some sort of impossible convergence between the Catholic Faith and the Devil. A pope who cannot discern the difference between the Tradition and the Deceiver must surely be either a fraud or insane. But I don't blame him; I blame his electors.

Without writing a tome, I'm in complete agreement with your points, Fr. AJM, Henry's question and particularly with Rood Screen's conclusion, "I don't blame him, I blame his electors".

Assuming Cardinal Mueller Learns from experience it seems like this interview is going bring him some grief from the Pope.

Of course all of this veiled and unveiled criticism of the pope in the public forum seem to me to be unprecedented and very unfortunate because it turns Catholicism into a political system with people choosing sides, liberal/conservative, traditional/innovative. And if the conservative faction of cardinals can be so vociferous in criticizing a sitting pope, this will continue when the papal red slippers return to a sitting pope with liberal cardinals doing the same.

I would hope the next pope has more savvy in trying to win over dissenting cardinals with sugar. Pope Francis seems like he enjoys using vinegar with those in the curia and anyone that he wants to put down.

The papal Curia is tiny compared with the bureaucracies of even minor nation-states, since the actual governance of the Church is carried on at lower levels. All the same, it is not a good idea to gratuitously make enemies of those who work for you, still less to publicly scold and insult them.

The CDF recommended changes in the draft of Amoris Laetitia which were all rejected by Francis who was all too obviously influenced by the dubious and narcissistic Fernandez, who it appears actually wrote large parts of the document. Nevertheless Cardinal Müller defended AL against its critics. He was rewarded for his loyalty by being peremptorily dismissed with the comment 'they tell me you are my enemy'.

Müller is an intellectual heavyweight and is orthodox without being notably conservative. He has criticized the idea that national episcopal conferences have authority in themselves, which might run contrary to Francis's purported agenda and have played a part in his dismissal. He is not flavour of the month among the majority of the German bishops, whose opinion the Pope takes seriously.

In any event, Francis may have cause to regret making an enemy of him. It is naive in the extreme to imagine that the governance of the Church is immune from political considerations. Fr Hunwicke recently pointed out that behind the avuncular and poor-hugging facade, Francis is a hard and determined politician with a vindictive temper and an appetite for power, with a disinclination to allow anyone or anything stand in his way.

Also, as was said about WE Gladstone, he is 'an old man in a hurry.'

John says, "Müller is an intellectual heavyweight and is orthodox without being notably conservative."

Both these assertions are credibly challenged by a review of his writings, as far as I'm aware.

At any rate, it is incredibly clear that Muller is aligning himself to be the next pope. I will say that he demonstrates the right level of ambivalence to doctrine for the job. The man seemingly believes nothing since his opinions change publicly from day-to-day. So he is very qualified to be the successor to Francis so that he can preside over the continued auto-demolition of the Catholic Church.

A bit off the topic, but having to do with religion---what is the feeling out there about moving the US embassy from Tel Aviv to Jerusalem? I don't see the political good that comes out of it...what would the Vatican think?

So Pope Francis would not see this as a good move because he thinks as others do, that it will inflame passions rather than quell them.

Without having put much thought into it, it seems misguided to move the embassy to Jerusalem. I neither understand nor agree with the U.S. government's fascination with Israel.

Marc, fundamentalist Protestants have a peculiar view of Israel and the Jews which is much more positive than their view of Catholics. Thus this political block has influence on presidents and presidential candidates. Barack Obama moved away from that mentality but Trump has embraced it again.

The Vatican has always been very concerned about the Palestinians and the proper treatment of them. Palestinians can be Muslims, Catholics and Eastern Orthodox.

I guess Pope Francis would have said in 1938, well let Czechoslovakia and Austria go to the Germans since we wouldn't want to upset Herr Hitler and inflame the situation. ironic that the Pope is trying to curry favor with the "elites" who hate the Catholic Church.

If Trump is doing this to win the Jewish vote, it won't work---he lost the Jewish vote nationwide by about 3-1 last year. I would not be surprised if far-right Pat Buchanan, who has criticized the "Israeli Lobby" before, writes a column against it (though in fairness, Buchanan traditionally has been critical of any US involvement in the Middle East, which he views as a quagmire).

I just have to remind myself "God is in control" amidst an erratic president, dysfunctional Congress, and fires out in California!

Anonymous (Kavanaugh), President Trump has Jewish grandchildren, so naff off.

RE: Trump/Israel/Jerusalem...I am for anything that makes liberals wring their hands and run in small circles. This can only be a good thing in the end.

Well, you sure seem so charitable to a state (California) where thousands of acres have burned and countless homes destroyed (probably some of those Republicans, even!) Must be the wrath of the Almighty, right? Just like the flooding in Houston earlier this year in red Texas was that same wrath? Andy maybe Florida too?

For all its problems, California is an economic powerhouse, easily would be among the largest economies of the world if it were its own nation. Maybe you prefer somewhere like Alabama or Mississippi?

Spot on (and Kavanaugh's hair on fire, you forgot that)

Houston is a blue city in a red state. Many areas in Florida affected by the Hurricane were likewise blue.