WHICH DO YOU LIKE BETTER, THE BEFORE OR AFTER? 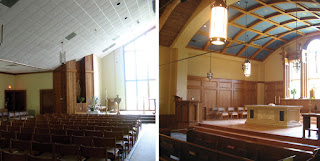 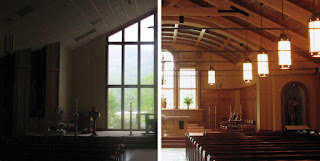 Clearly, after as it's more consistent with traditional Roman style church appointments. The tabernacle, however, is a bit lost in front of the palladian window - almost like they forgot they needed a place to put it and because of that just used the window sill. Ad orientem with the tabernacle on the altar would solve this problem (at least in my head as the reality is that isn't likely to happen any time soon).

Before. I believe liturgical space should be so vacuous that we forget about god and learn to worship our neighbors and love ourselves.

Rood Screen - LOL!!!!! I could see Kavanaugh saying Mass in the "before!"

I would say that is the interior of St. Bernadette's Church in Linville, NC, across from Grandfather Mountain and the Grandfather Golf and Country Club. Beautiful view of the mountain with the window behind the altar---you see a lot of Floridians and others escaping the heat of the lowlands during the summer months. Mass packed there in the summers; winters can be harsh though, so the "congregation" there is more seasonal.

I could see myself celebrating in either - or both.

now if that great palladian window would be covered with old fashioned stained glass,not some modern "interpretative" crap, the look would be complete

I went on line and searched for St. Bernadette's Church In Linville, NC (mentioned in the comment above). The light coming through the windows as well as the scenery behind it could prove to be a distraction. Looking at a photo of the interior, which was taken after dark(since there is no light coming through the windows), it is much easier to focus on the altar and the crucifix on the window behind it.
In the end the important thing is that it is a Catholic Church and confessions are heard Mass is celebrated there.

After, definitely after. Nothing really distingushes the former from any other bland, secular chapel or generic, modern Christian worship centre.

Kudos to Fr. Kavanaugh for his comment. His comment also speaks to the Sacrifice of the Holy mass. A holy priest of Jesus Christ, works with the facility at hand to celebrate the Mass for the communal body of Christ, fancy or ugly modern.

I think almost every priest could see himself celebrating in either or both. But that was not the question.

You must be confusing Kavanaugh with Fr. McDonald. To my knowledge, Kavanaugh has never called Mass, the Holy Sacrifice of the Mass or other words to that effect.