POPE BENEDICT WAS NOT INTO UNDOING VATICAN II BUT FULFILLING IT PROPERLY! 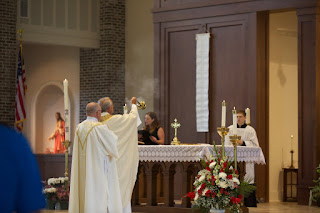 
...The use of the old Missal presupposes a certain degree of liturgical formation and some knowledge of the Latin language; neither of these is found very often.  Already from these concrete presuppositions, it is clearly seen that the new Missal will certainly remain the ordinary Form of the Roman Rite, not only on account of the juridical norms, but also because of the actual situation of the communities of the faithful.

It is true that there have been exaggerations and at times social aspects unduly linked to the attitude of the faithful attached to the ancient Latin liturgical tradition. Your charity and pastoral prudence will be an incentive and guide for improving these. For that matter, the two Forms of the usage of the Roman Rite can be mutually enriching: new Saints and some of the new Prefaces can and should be inserted in the old Missal.  The “Ecclesia Dei” Commission, in contact with various bodies devoted to the usus antiquior, will study the practical possibilities in this regard. The celebration of the Mass according to the Missal of Paul VI will be able to demonstrate, more powerfully than has been the case hitherto, the sacrality which attracts many people to the former usage.  The most sure guarantee that the Missal of Paul VI can unite parish communities and be loved by them consists in its being celebrated with great reverence in harmony with the liturgical directives. This will bring out the spiritual richness and the theological depth of this Missal.
Posted by Fr. Allan J. McDonald at Saturday, December 23, 2017

Summorum Pontificum "is merely an act of tolerance..."

"What do you say to those who, in France, fear that the "Motu proprio' Summorum Pontificum signals a step backwards from the great insights of the Second Vatican Council? How can you reassure them?"

"Yet for these people, to have the love and tolerance to let them live with this liturgy seems to me a normal requirement of the faith and pastoral concern of any Bishop of our Church.

The reality is that the Novus Ordo is here to stay. From Popes Blessed Paul VI to Francis, that has been made clear.

Here are quotes from Cardinal Ratzinger's 1998 A.D. address on the 10th anniversary of Ecclesia Dei:

-- "On the other hand one has to admit that the celebration of the ancient liturgy was too lost in the realm of the individual and the private."

-- "One must admit that the communion between the priest and the faithful was lacking. I have great respect for our ancestors who during the Low Mass, said the prayers "during Mass" which their prayer book recommended. Certainly one cannot consider that as the ideal of the liturgical celebration!"

-- "Perhaps, these reduced forms of celebration are the fundamental reason why the disappearance of the ancient liturgical books had no importance in many countries and caused no pain, There was never any contact with the liturgy itself."

I understand that Benedict XVI wanted to reassure the French bishops, but to describe Summorum Pontificum as 'simplement un acte de tolérance' issued for 'pastoral' reasons was an unfortunate turn of phrase. Benedict makes it quite clear elsewhere that admitting that the old Rite has parity of esteem with the new has implications for the whole Church.

Benedict has always maintained that the principles underlying the Liturgical Movement were sound.

'The use of the old Missal presupposes a certain degree of liturgical formation, and some knowledge of the Latin language; neither of these is found very often'.

A quite damning indictment of the current standard of seminary training.