HAVE YOU HEARD YOUR PRIEST OR DEACON PREACH AGAINST THE IMMORALITY OF FAKE NEWS WHICH SURELY DOES EXIST? 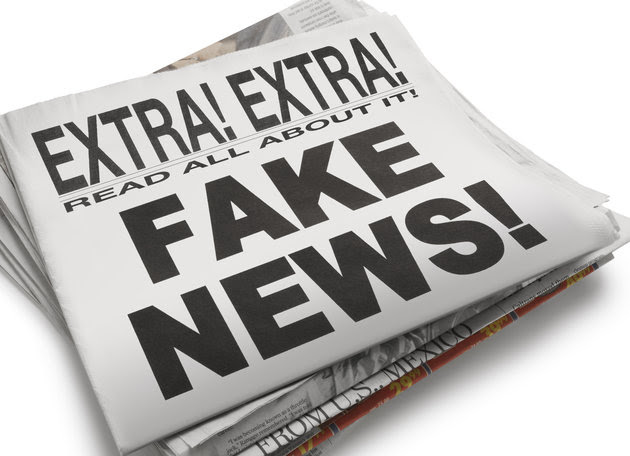 Posts that may look credible at first might contain false information
Photo Courtesy of MCXV
Why aren't reporters and networks not being called out for breaking the 8th Commandment? Surely fake news qualifies as a mortal sin especially for reporters and media newsrooms!

Ross, citing an unnamed confidant of Flynn, had reported Friday that during the presidential campaign, then-candidate Donald Trump had directed Flynn to make contact with the Russians. That would have been an explosive development in the Russia investigation, but hours later, Ross clarified the report on the evening news, saying that his source now said that Trump had done so as president-elect, after the election. At that point, he said, Trump had asked Flynn to contact the Russians about issues including working together to fight Islamic State.

ABC was widely criticized for merely clarifying and not correcting the report. It issued a correction later in the evening.

“The reporting conveyed by Brian Ross during the special report had not been fully vetted through our editorial standards process,” the network said in a statement Saturday.

The news brought reaction from Trump, who tweeted: “Congratulations to @ABC News for suspending Brian Ross for his horrendously inaccurate and dishonest report on the Russia, Russia, Russia Witch Hunt. More Networks and “papers” should do the same with their Fake News!”

As for Ross, who is ABC’s chief investigative correspondent, he tweeted: “My job is to hold people accountable and that’s why I agree with being held accountable myself.”

Ross, 69, has won a slew of journalism awards, but he has drawn criticism for previous errors.
Posted by Fr. Allan J. McDonald at Sunday, December 03, 2017

"Why aren't reporters and networks not being called out for breaking the 8th Commandment?"

You've just stated that they ARE being called out....

In recent years, the only form of immorality that our priests and deacons preach about is either racism or seeking to enforce immigration law, which is apparently a form of racism.

That's actually an improvement. Previously there was no form of immorality that they would preach against.

Fr. James Martin who promotes sexual immorality was just quoted on Fox and Friends as condemning the tax cuts and that those who voted for it are taking advantage of the poor and that God will judge them at their death for it and send them to hell.

I din't think this liberal Jesuit believed in hell or the condemnations of Scripture not only for not taking care of the poor but also for sodomy and fornication and the like.

How do you spell hypocrite?


This is a scurrilous false accusation.

Think of the media as Democratic operatives with bylines and you will not be wrong. Fake news is another word for propaganda - and some simpleton Catholics (including clergy) lap it up!

I have heard sermons about fake news and immorality.

If this isn't the promotion of sexual immorality and quite possibly heresy, well then you are right Anon at 9;10 AM:

Next, when speaking to a male questioner recently, Martin expressed the “hope [that] in 10 years you will be able to kiss your partner or, you know, soon to be your husband”. Any reasonable listener will conclude that Martin not only hopes that a man may someday marry a man with the Church’s blessing, but that Martin believes “same-sex marriage” to be radically possible under Church teaching and that it is a matter of regret that such Church recognition is not yet available.

Here, I suggest, Martin effectively denies infallible Church doctrine that marriage can exist only between a man and a woman. I see only two canonical issues in the wake of his statement:

On another thread I made a comment that included the following passage:

“There are two words in the Catholic lexicon that should be our guides in assessing any of the hot button issues that get debated on this Blog . . . . Those two words are honesty and integrity. . . . [I]t is vital that we all try to rise about our petty tribal partisanship and stand for honesty and integrity. This means that we should not tolerate lies and other falsehoods, by whomever uttered, and we should not tolerate hypocrisy, by whomever displayed. Facts matter. Truth matters. Honesty matters. And integrity matters. This – and not tax reform, not immigration, not sexual misconduct per se, not North Korea, not even abortion as such – is the great calling of our time. I hope and pray that all Catholics (and many others) will stand up and be counted in answering this calling. Unless we do so, none of the other issues about which we care can be properly addressed and things will go very badly for the Republic and for the Church.”

So, I will be the first to call out ABC’s Brian Ross for propagating fake news. But, if I am trying to rise above petty tribal partisanship and to stand for honesty and integrity, then I must also be willing to call out Sean Hannity, for example, when he propagates fake news as he has done several times (and for which he has apologized, as ABC has apologized for Brian Ross, also suspending him).

And I will be the first to call out Hillary Clinton and other Democrats when they lie or utter falsehoods, as Hillary did numerous times during the campaign and as many Democrats have done when alleging that the Republican tax reform will raise taxes on most middle class families (in fact it will likely raise taxes on many middle class families but not most, at least not initially). But if I am trying to rise above petty tribal partisanship and to stand for honesty and integrity, then I must also be willing to call out Donald Trump, for example, when he propagates fake or misleading videos about Muslims as he did a couple of days ago, or when he now resurrects the Birther issue after having finally conceded during the campaign that Obama was born in Hawaii, or when he now denies it is even his voice on the Hollywood Access tapes after he not only admitted it was but made a public apology for it during the campaign (as of November 14 the Washington Post running list of Trump’s false or misleading claims since the inauguration stood at 1,628, not to mention his false and misleading claims during the campaign, which were much more numerous even than Hillary’s).

I would hope that everyone reading this Blog can and will say the same and make every effort to retain their objectivity and impartiality and to stand for honesty, integrity, and truth. If not, I have little hope for the Republic and the Church.

Clarification: Please add the word “reportedly” with reference to Trump resurrecting the Birther issue and denying his voice is on the Hollywood Access tapes.

Who concocts fake news reports? Why would a person concoct fake news? What is the benefit to that?

In regard to Catholic issues...

Why, for example, did this or that person concoct the nonsense that His Holiness Pope Francis had established a secret project to create an Ecumenical Mass?...or planned to "outlaw" the TLM...

What was the purpose behind the "Pope Francis posed five questions to Cardinal Müller" fake news?

Who concocted the "Pope Francis was elected by the secret Saint Gallen's Mafia group" fake news?

Who concocts the..."Breaking...SSPX will be regularized on (fill in the date)" nonsense that pops up every few weeks on "traditional" Catholic blogs?

Are not the folks who traffic in fake news aware that their lies will be exposed within hours or days?

You write, "Why aren't reporters and networks not being called out...?"
You post an article about a reporter being called out (and suspended for a month).
As usual, most complaints about the media are based entirely on reports....from the media.
FUNNY.

Mark - At least in large portions of the US population, facts (true news) no longer hold sway.

PT Barnum knew it - a sucker is born every minute.

What is gained by the professional liars? "Fake news is written and published with the intent to mislead in order to damage an agency, entity, or person, and/or gain financially or politically, often with sensationalist, exaggerated, or patently false headlines that grab attention."

Trump is waging a battle against, well, just about everyone. If it's not the FBI it's Senator Flake. If it's not his own Attorney General, it's CNN. If it's not Rosie O'Donnell, it's Hillary Clinton.

His sole purpose is to undermine the legitimacy of any- and everyone who dares to stand up to him. Witness his recent attempts to deny responsibility for this recorded obscene sexual assault battle plan from 2005.

Almost every day we are subjected to gaslighting. "Gaslighting is a form of manipulation that seeks to sow seeds of doubt in a targeted individual or in members of a targeted group, hoping to make them question their own memory, perception, and sanity. Using persistent denial, misdirection, contradiction, and lying, it attempts to destabilize the target and delegitimize the target's belief."

If everyone who makes a false statement on this blog got suspended for a month, none of us could pay for our computers or phones.

Thank you for explaining the term “Gaslighting.” I noticed its use by a commenter on an earlier thread (I believe it was Father Kavanaugh) but I did not at that time follow up and research its meaning. I have now done that. The concept is most illuminating (pun intended). Here are a couple of pieces elaborating upon use of the practice in various contexts:

If we are to retain our objectivity and impartiality and to defend honesty, integrity, and truth, then we all need to know about this practice, so that we can recognize it and take steps to combat it when others, whoever they may be, try to use this technique on us. But, here again, we must be careful to remain true to the above virtues so that we do not inappropriately label something as gaslighting when it is not that. This said, one suspects that gaslighting would be one of Satan’s favorite techniques.

Thank you again for the illumination.

Although I suspect some care and caution is warranted, if only because the author seems to direct his attention onto gaslighters on the right (but not on the left), this book (which is discussed in the Wikipedia article) would seem to be an important one to read:

I plan to get it and read it as soon as I can: Has anyone here read it?

While there is that is lot can be said on the subject of Donald Trump (laugh), his attacks on "Fake news" can be put down as one of the more positive things he has been engaged in. This is one area where I think he has done us a favor-if only the media would get a clue.
While I don't know that it can be termed "gaslighting", what Mark Thomas comments on above more than illustrates the kind of things that have been written and published which have had the effect, if not the intent of that kind of manipulation.

Which is to say, targeting,changing perception, and delegitimizing a person's faith and belief.

Trump simply wants to discredit anybody in a position to criticize or fact check his nonsense and dispense with all of the traditional checks and balances that have served us well for 240 years.

Pick the news outlet that you hate the most -- New York Times, Fox, CNN, Washington Post, etc. -- and their track record for truthfulness is far better than the man who spent years arguing that Obama was born out of this country and still tweets delusional nonsense daily.

marcus tullius, thanks for the laughs. The news outlets you mentioned are the epitome of fake news aka propaganda but I understand are very popular with fake catholics