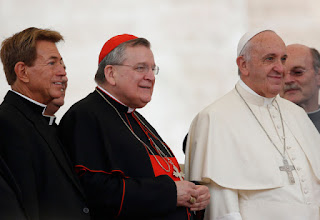 1. The revision of the Liturgy with its subsequent loss of Catholic identity, reverence, spirituality and awe and wonder has maintained its status quo with the reversal of many of the initiatives of Pope Benedict XVI. This has led blogs built on the excitement and enthusiasm that Pope Benedict brought about with His Holiness' brilliant leadership in renewing the Ordinary Mass in continuity with the 1962 Missal to a bitter realization that Pope Francis has undermined all of this in three major ways:

a. His Holiness put an immediate clamp down on Cardinal Robert Sarah's desire last Advent that priests on their own initiative begin celebrating the Ordinary Form of the Mass ad orientem--thus maintaining the status quo of the Mass with the priest acting as a sort of actor at the altar facing his audience. Pope Francis calls the terms "reform of the reform" incorrect and says the reform of the Mass is magisterial and will not be undone. Of course, Pope Benedict called it renewal in continuity, not reform of the reform.

b. Pope Benedict's thrust on assuring literal translations of Latin into the vernaculars was undermined by Pope Francis handing over the translations of the Mass to local bishops' conferences although not doing away entirely with Liturgiam Authenticum--thus it wasn't clear what this shift actually would do in terms of the new and glorious English translation we currently have--although this blogger has always been open to a refinement of the English syntax and use of punctuation in the priestly prayers of the new and glorious English translation. And this blogger knows that if this were done this morning no one, maybe not even the priest, would know it!

c. Hope arose when Cardinal Sarah made clear that the Vatican still had to approve translations in the old way only to have Pope Francis publicly slap down the good Cardinal once again making clear that Cardinal Robert Sarah is a relic of the Benedictine era and not long for being the head of the Congregation for Divine Worship.

2.  Traditional Catholic sexual morality based upon Scripture and Tradition is being replaced by situational ethics incrementally by some bishops' conferences or individual bishops who are reading the footnote in Amoris Laetitia as an opening to this. The opening of Pandora's Box to make Catholic sexual morality more ecumenical with liberal Protestantism, such as the Lutherans and Episcopalians, is the allowance for decisions of consciences by adulterers after a priest has accompanied parishioners in a second  "marital" union not recognized by the Church and thus traditionally called adulterous, to receive Holy Communion if their conscience tells them it is okay or they have a need for comfort religion.

I was taught by the liberal 1970's seminary that the greatest corruption of Judaism occurred when their religion was turned into "comfort religion." You would think Pope Francis, completely informed by 1970's theology, would know this!

This shift to situational ethics of course leads to Catholics who are fornicating, having unnatural sex (opposed to natural law) and the like, discerning with a priest if they too can receive Holy Communion in mortal sin even though they have not repented of it and live it publicly. The same is true of same sex sexual relations with civil law approval in a civil marriage and the like.

In terms of homosexuality and the acceptance of the life style a sort of footnote is present in this year's St. Peter's Square Nativity Scene accomplishing the same purpose as the Amoris Laetitia's footnote. You can read Crux's John Allen's take on it HERE.

Thus the first synod on the family in 2014 which rejected the  move toward liberal Protestantism's sexual morality has been overturned by  Amoris Laetitia's footnote which opens itself to varying interpretations making way for the complete loss of traditional Catholic sexual morality and thus making into doctrine, situational ethics pioneered in the 1970's.

This video proves that Cardinal George Pell was misled as were other cardinals in 2014:

"Traditional Catholic sexual morality based upon Scripture and Tradition is being replaced by situational ethics incrementally by Pope Francis."

This is a very troubling accusation for a priest to make so blithely. Many who are far more well-informed than you have defended the Holy Father's Amoris laetitia as being entirely in conformity with Tradition and Scripture.

To make such an accusation publicly is highly ill-conceived.

You should reread my article as it is the interpretation of the footnote in Amoris Laetitia that is causing situation ethics to abound in many places. In fact this has been going on in local parishes in the USA since the 1970's where priests either look the other way or tell parishioners in illicit unions to use their own judgement if they are to receive or not receive Holy Communion. Many priests in fact will bless this unions in a marital ceremony. I have a photo of a priest doing so for close friends of my parent in the 1970's neither of whom had their previous marriages annulled. But back then, it was clear that there wasn't a sanctioning of this by the papal Magisterium. That seems to be eroding now.

I like the photo of your church's altar using the Benedictine altar arrangement, and think that arrangement could bring back much Catholic identity. It is adaptable for either ad orientem or versus populum. It also works well in churches that only have the Vatican II style altars. Hopefully its use will increase in 2018. I wonder why in your photograph two crucifix's are in use? Small changes can make an enormous difference

The Church is off the rails. Who they choose as the next Pope will be a good indication of where we are headed. I am not optimistic.

Fr McDonald:
I agree with you. That is how the Modernists work, managing, usually surreptitiously, to open the door a tiny bit which eventually throws it wide open. That footnote seems like such a "seed" of revolutionary new doctrine that tries to conform the Church to the modern (god-less) culture and you are right as a pastor to sound the alarm.

Father MacDonald, one of my New Year's Resolutions is going to be to give up this blog. It has become saturated with scandal and negativity -- negativity which I have contributed to and for which I've gone to Confession on more than one occasion. I have enough negativity in my life, for reasons I'll not go into, and I don't need more scandals which I'm powerless to change to worry about. I started reading this blog because of some articles defending Francis' orthodoxy, but those days seem long ago.

My decision was based in part on this article, the wisdom of which only confirms what I have been thinking about over the past few weeks.
https://www.thecatholicthing.org/2017/12/31/a-fresh-start-for-2018/

I wish you and your readers the best of 2018s and I thank God for your positive response to His call to the priesthood. But this blog is not helpful in a world where hatred is the norm.

"Church leaders from around the world hailed the tone of mercy in Pope Francis’s apostolic exhortation, Amoris Laetitia (The Joy of Love), but cautioned against a hurried reading of the document. “What is new about this exhortation is its tone,” Cardinal Wilfrid Napier of Durban, South Africa, told Catholic News Service after the document’s release on April 8. He said it calls on all ministers “to be warm and caring in the way they deal with people in difficult circumstances.” - Catholic Herald

"ROME- Cardinal Gerhard Müller, allegedly replaced by the pontiff as the Vatican’s doctrinal chief for his rejection of Amoris Laetitia, has penned an essay defending it.
Among other things, Müller acknowledges that there can be “mitigating factors in guilt,” referring to the case of access to the sacraments to divorced and civilly remarried people. Hence, it’s possible that, “through a pastoral discernment in an internal forum,” Catholics in this situation might be able to receive communion." - Crux

"But in his Aug. 2 speech to the Knights of Columbus, Cardinal Ouellet emphasized that Pope Francis had not touched Catholic teaching regarding divorce and the indissolubility of marriage. "What is proposed is a new pastoral approach," said the cardinal, in charge of vetting and appointing bishops around the world. "More patient and respectful, more dialogical." - Catholic News Service

"Pope Francis' new document on love in the family is welcome particularly for its steadfast adherence to Church teaching on homosexual acts and relationships, Cardinal Christoph Schönborn of Vienna said." - EWTN News

Your accusations against the Holy Father are nothing short of scandalous. You harm the Church by fanning the flames of ideological, at times, fanatical, traditionalism.

Only a person who has never met a traditionalist would accuse Fr McDonald of such.

The Church under Pope Francis is circling the drain in the same manner the mainstream Protestant churches have already done years ago. Our only hope is that God will have pity on his Church and preserve the deposit of faith in pockets whence it can spring forth again if conditions improve.