WHAT A DIFFERENCE A YEAR MAKES! WHICH DO YOU PREFER, THE BEFORE OR AFTER GAUDETE VESTMENT?

Did your priest wear rose, dusty rose, pink or hot pink this Guadete Sunday? I wore hot pink last Gaudete and Laetare Sundays as this is what was in the new closet at St. Anne's. But now, by the grace of God, I won't be embarrassed this morning or on Laetare Sunday! God is Good! 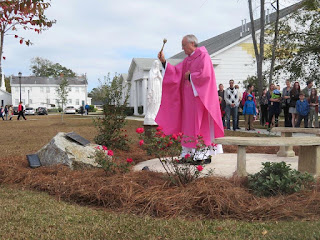 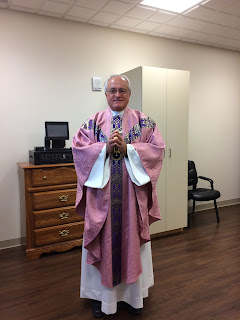 Rather than rose, this one looks like overcooked lavender. Maybe it's the lighting....

Yes, the fancy new what we use to call florescent lighting in the sacristy. It is definitely dusty rose or rosacia! But now that you mention it, looks lavender, but it ain't.

Rose fiddleback at the SSPX parish.

Red vestments at the Orthodox parish.

Rose at St. Joseph, Waycross. Your new one, Father, looks very much like the one I remember from childhood that we continued to use until shortly after 2000 when the purple orphrey got a bit faded. That chasuble, used only twice a year, was probably from the late 50's early 60's era. We went several years with a rose chasuble and our current pastor purchased a modern style one a couple of years ago. I very much like your new ("old school" style) one better than ours but I do applaud our pastor for at least seeing the need to have the proper liturgical color!

After is so much better. I cannot imagine how the "before" was ever thought to be proper...except maybe, maybe if one is participating in the Cherry Blossom Parade in Macon...but even then I'm not so sure. God Bless and Happy Christmas from all the Makins!

that neon pink chasuble had to be from the 1980's

The problem with the first picture is not so much the colour, as the fact that the priest is incorrectly dressed. The chasuble is a Mass vestment and should only be worn for the celebration of Mass. For a blessing like this one, the priest should be wearing either a cope or a stole over choir dress.

I know this is a widespread abuse, but it is symptomatic of the general sloppiness which has attended the liturgy over the past 50 years.

Point well taken, but that blessing took place immediately following the Guafete Sunday Mass and I had asked the congregation to follow the servers andme out of the church as a part of the recessional for the blessing.

There is no recessional in the Roman Rite, which may come as a surprise to many. Not long ago there was a TV dramatized version of the Father Brown stories, updated to the 1950s. In one scene the protagonist was shown standing outside the church after Mass gladhanding the congregation and wearing a chasuble with - wait for it - the stole on top. Ludicrous.

Julian Fellowes (of Downton Abbey fame) produced a version of the Titanic disaster which showed the ending of the Mass celebrated on board for Low Sunday. The chalice had not been re-covered, and the priest blessed the congregation with the words 'Benedicat vos omnipotens Deus in nomine Patris et Filii et Spiritus Sancti'. Unbelievable.

This year there was a dramatization of the Gunpowder Plot. The opening scene purported to show a clandestine Mass celebrated by Fr Garnet in a recusant household. Everything - vestments, ritual, language - was totally unrecognizable.

Is it lack of basic research, or do the producers rely on Catholic 'experts' who don't even know their own liturgy?

Sometimes in Anglicanism, you will see the priest wear a cope or just alb and stole for the first part of the Mass, and then put on a chasuble for the liturgy of the Eucharist---maybe the change in vestments symbolizes "something's going on"---change in the works. There is not, however, any requirement in the US Episcopal Church concerning vesting---doubtless you can still find some parishes where the priest (in that denomination) does not wear a chasuble for the Eucharist, but my understanding is that most of them do.

Yesterday afternoon, at Atlanta's (Episcopal) Cathedral of St. Philip (for Lessons and Carols service), a priest and a deacon each wore a cope (though "choir dress" would have sufficed to as no communion was served). But St. Philip's tends to be more on the "high" end of liturgy, so copes there sometimes are worn on festive occasions---but even there, the celebrant at a Eucharist wears a chasuble (sometimes more ornate than in some Catholic Masses around here!)

I would say "option number 2" looks better above (chasuble)

Actually, the second picture (no doubt distorted by the lights) shows the colour 'Palatinate purple', the colour of Durham University, England's third. At Oxford and Cambridge sporting prowess is awarded by a 'blue', at Durham by a 'palatinate'.

Perhaps Fr McDonald should be considered for an honorary degree from that august institution, which happens to be my alma mater.

I suppose at Christmas, white or gold vestments are appropriate?

Anglicanism sometimes uses the color blue for Advent, but I am not sure why...