IF THERE EVER WAS A REASON TO GO BACK AND READ, REREAD, AND READ AGAIN SACROSANCTUM CONCILIUM OF THE SECOND VATICAN COUNCIL, THIS IS IT!

"Apart from what I may think about Prayers at the Foot of the Altar, or the high medieval offertory prayers of the Tridentine missal, or ad orientem, or any number of things, I would be willing to talk about the provision of all sorts of generous options or even requirements if – if – they helped...."--Fr. Anthony Ruff OSB, Praytell 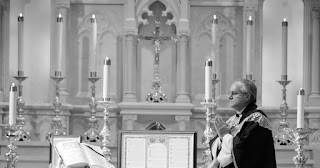 Pope Benedict and so many others knew that the protestantizing of the reformed/deformed Mass isn't what God wanted because in no way does it reflect Vatican II!

“We must strip from our Catholic prayers and from the Catholic liturgy everything which can be the shadow of a stumbling block for our separated brethren that is for the Prostestants.”  - Archbishop Annibale Bugnini, main author of the New Mass, L'Osservatore Romano, March 19, 1965


This is an important, balanced and sober article:

HE IMPLEMENTATION of Vatican II reforms—and their interpretation—is a longstanding topic of debate. There is nothing new there.
The highly respected Rev. John F. Baldovin, S.J., professor of liturgy and sacraments at Boston College, recently wrote an article well worth reading: Five reasons Pope Francis embraces the Vatican II liturgy. Fr. Baldovin succinctly describes his understanding of Pope Francis’ view with regard to liturgical reform.
While he paints a picture of opposing and extreme sides, (e.g., the opposition to Vatican II as embodied by restorationists in the “Reform of the Reform”) liturgical battles are often fought in more nuanced terms, (which I believe Fr. Baldovin certainly understands). Those who advocate more reverent liturgy are certainly within the intentions of Vatican II and may not at all be looking for Pre-Vatican II restoration. Likewise, those who advocate innovation and more casual worship may be out of step with Pope Francis himself. Fr. Baldovin writes:

“Certainly Pope Francis is no fan of irresponsible experimentation or sloppy adaptation of the liturgy (as he witnesses strongly in his sober and simple celebrational style and choice of vestments), and there is nothing that is really new in this talk.”

“Francis’ emphasis on the multiple modes of the presence of Christ in the liturgy is particularly important because it leads him to say that the altar is “the center toward which our attention converges…the gaze of the praying people, priest and faithful, is oriented to the altar, convoked for the assembly around it.” I doubt very much that the pope was speaking loosely when he said “around” the altar. In other words I think it was a comment, albeit oblique, on those who want the priest to face “east.”

This can be debated and interpreted endlessly, as Pope Francis has celebrated Mass ad orientem. But ultimately, this is not important. While I have a personal appreciation for the Novus Ordo celebrated ad orientem, it is not near the top of my list of liturgical priorities, as Mass may be reverent facing East or West. The Church today has much bigger fish to fry.

HE DEBATE and drama surrounding ad orientem has been overblown. Few understand what it is and what it is not in the Vatican II Mass. Such lack of catechesis is a dereliction of duty on the part of the Church. (In short, the priest faces East for perhaps 7-10 minutes at most.) Like it or not, it is part of the Vatican II reform. It is assumed by the 2012 GIRM that the priest will face East for part of the Mass as indicated by rubrics that are part of the current Roman Missal and have been in place for over fifty years.
• Three False Ideas about “Ad Orientem” Celebration by Andrew Leung
However, I would submit that the liturgical battle over celebrating Mass ad orientem is insignificant at this time. Far more important is reverent liturgy. Far more important is catechesis and education to properly implement Vatican II. The Church has failed in various ways in this regard for the last fifty years. Hence, the retreat into restoration, which is arguably far healthier than the current state of affairs in a number of parishes.

“And there is still work to do today in this direction [the reform begun by Pope Paul VI], in particular, rediscovering the reasons for the decisions taken with the liturgical reform, surmounting unfounded and superficial readings, partial reception and practices that disfigure it. It’s not about rethinking the reform by looking again at the choices, but of knowing better the underlying reasons, also through historical documentation, as well as to internalize the inspirational principles and observing the discipline that regulate it” [emphasis added].

He also notably declared, “We can affirm with certainty and with magisterial authority that the liturgical reform is irreversible.”
While the invocation of “magisterial authority” is not to be ignored, this statement is also not saying anything particularly new. Certainly, the Pope felt it necessary to affirm the irreversibility of Vatican II given the politics that often surround liturgy. But taking politics out of it, we should certainly hope so that Vatican II is irreversible! This statement by Pope Francis is both important news and not. But in no uncertain terms, Pope Francis has made himself clear.
Posted by Fr. Allan J. McDonald at Saturday, December 23, 2017

The translation of the "quote" from Bugnini is highly inaccurate.

Properly translated: "And yet it is the love of souls and the desire to help in any way the road to union of the separated brethren, by removing every stone that could even remotely constitute an obstacle or difficulty, that has driven the Church to make even these painful sacrifices."

who cares what that pompous lefty Ruff has to say

Frmjk, the more accurate translation you post shows how important a more literal translation is compared to the old method of approximation, although I would translate posso not as remotely but as possibly constitute or can constitute.

But with that said, you continue to make the point about that dastardly Bugnini not following SC's agenda but something else.

Benedict knew better! We in the Latin Rite preserve our cultural and liturgical patrimony and allow for our separated brethren to preserve theirs in their own Rite as the Ordinariate's Missal does with Anglican patrimony but oddly enough with our own Rite!

I think the only "dastardly" part of the story is repeating the mistranslation of Bugnini's words.

SC does not - cannot - stand apart from the whole of the Council's agenda for the Church which includes Unitatis Redentigratio, the Church's firm desire for the unity of Christians and for the work, under the guidance of the Holy Spirit, that we and our separated Brothers and Sisters are called to do to achieve that goal.

When you start implementing SC, let us know, particularly the mandate requiring the pastor teaching his congregation to sing, IN LATIN, the parts of the Mass proper to them. I think that may be part of the whole unity "thingy" and in keeping with Veterum Sapientia, stating that Latin is the language which joins the Church of today. Or do you pick and choose which papal statements to follow?