Today I celebrated Sunday in the Octave of the Nativity at our Cathedral's EF High Mass. I remain impressed with the number of young people in attendance and the superb schola. The Mass is Gregorian Chanted acapella. The schola of 10 or so is all young people in their late teens and early 20's. Some are students at Savannah's College of Art and Design.

The Cathedral was spectacularly arrayed in its Christmas splendor with a Nativity set that is a tourist attraction in its own right. Marist Brother Robert Sokolowski came to work at the Cathedral my second year there in 1986. He began his tradition of elaborately decorating the Cathedral. The tradition continues even after Brother Robert's retirement about two years ago.

The New Year of 2018 will see the growth of the EF Mass, more reverent celebrations of the OF Mass and God's grace purifying Catholics and leading them to Holiness.

Internal healing in the Church, Pope Benedict's desire for the Church will continue and we will be one year closer to the Second Coming of the Messiah and the consummation of the world.

In the meantime, those of us at Holy Mass at the Second Coming won't know the difference! 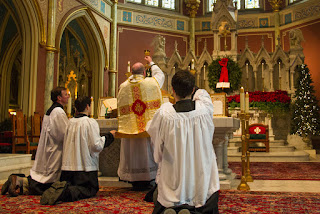 I am not surprised by the young people in attendance, only old lefties would be