WHERE WILL IT ALL LEAD? 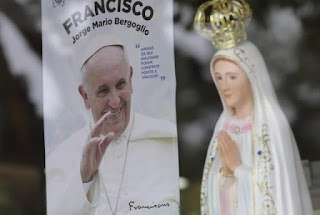 In a Papal Rescript granted on June 5, 2017 ex Audientia Sanctissimi to the Cardinal Secretary of State Pietro Parolin, and just now released by the Vatican in the Acta Apostolicae Sedis, the Holy Father has raised to the level of "authentic Magisterium" both the private letter he wrote on September 5, 2016 to Bp. Sergio Alfredo Fenoy, the Delegate of the Buenos Aires Pastoral Region of the Bishops’ Conference of Argentina, and the Criterios Basicos para la aplicación del capitulo VIII de Amoris laetitia ("Basic Criteria for the Application of Chapter VIII of Amoris Laetitia"), issued on the same day by the bishops of the Buenos Aires Pastoral Region.

The Supreme Pontiff decrees that the two Documents that precede [this Rescript] are to be made known by publication on the Vatican website and in the Acta Apostolicae Sedis, as authentic Magisterium. From the Vatican Palace, on the 5th day of June in the year 2017. (emphasis added)
Pietro Cardinal Parolin
Secretary of State

And Cardinal Burke is still waiting because........

I guess we’ll see how serious were those people who’ve taught that a pope excommunicates himself automatically by obstinate public heresy.

I think the Holy Father genuinely wants to help people by not excluding them. I just wish he could see that the truths of the Catholic Faith are liberating and worthy of promotion by him, rather than being dismantled by him.

If this report is true (no serious news source is reporting it), then the faithful must choose between the contradictory magisteriums of JPII and Francis. Which one is Apostolic? Which one is scandalous?

Gerhard Cardinal Müller declared just a few weeks ago that "if you look at what the Argentine bishops wrote in their directive, you can interpret this in an orthodox way."

‘Gerhard Cardinal Müller declared just a few weeks ago that "if you look at what the Argentine bishops wrote in their directive, you can interpret this in an orthodox way."

Really! Know Mark Thomas is trying to defend to now indefensible. The pope just made it crystal clear that he agrees with the bishops of Argentina that practicing adulterers can go to communion. The pope ISN’T interpreting it in an orthodox way. If he was he would have corrected bishops conferences that are bluntly teaching the heresy that aduters can go to communion without amendment of life. You Mark Thomas are obstinate in defending error. Think about that. To pretend that Francis is orthodox in his teaching is not only ridiculous but you are enabling his spreading of error. The de fide teaching of the Church, which Francis has NO AUTHORITY TO CHANGE :

Can. 5. If anyone says that the bond of matrimony can be dissolved on account of heresy,[11] or irksome cohabitation, or by reason of the voluntary absence of one of the parties, let him be anathema.

Canon 14.
If anyone says that man is absolved from his sins and justified because he firmly believes that he is absolved and justified,[118] or that no one is truly justified except him who believes himself justified, and that by this faith alone absolution and justification are effected, let him be anathema.

Canon 18.
If anyone says that the commandments of God are, even for one that is justified and constituted in grace,[121] impossible to observe, let him be anathema.

Canon 11. If anyone says that faith alone is a sufficient preparation for receiving the sacrament of the most Holy Eucharist,[52] let him be anathema. And lest so great a sacrament be received unworthily and hence unto death and condemnation, this holy council ordains and declares that sacramental confession, when a confessor can be had, must necessarily be made beforehand by those whose conscience is burdened with mortal sin, however contrite they may consider themselves. Moreover, if anyone shall presume to teach, preach or obstinately assert, or in public disputation defend the contrary, he shall be excommunicated.

Can. 8. If anyone says that the Church errs when she declares that for many reasons a separation may take place between husband and wife with regard to bed and with regard to cohabitation for a determinate or indeterminate period, let him be anathema.

The canons that I posted are of course from different sessions of the Council of Trent. All infallible.

I wonder what might damn a papal statement more fully, than a labored claim that it can be interpreted in an orthodox way (if you try really hard).

Anonymous said..."Really! Know Mark Thomas is trying to defend to now indefensible. You Mark Thomas are obstinate in defending error."

Anonymous, peace and good health be with you and your family.

I quoted Gerhard Cardinal Müller. If I'm in error, then Cardinal Müller is in error. After all, he declared that the Argentine approach to Amoris Laetitia is orthodox.

Anyway...I must obey God. That is, God commands me to submit to the Roman Pontiff's teachings. Thanks to the words of Jesus Church, I am confident that the Church of Rome has maintained the Catholic Religion immaculate.

During this blessed Advent Season, I am at peace. I don't have any worries as to Pope Francis' teachings.

‘I quoted Gerhard Cardinal Müller. If I'm in error, then Cardinal Müller is in error. After all, he declared that the Argentine approach to Amoris Laetitia is orthodox.’

I am aware you were quoting the cardinal. The cardinal made his remarks BEFORE Francis had his letter and the Argentine bishops take on AL published in the official Acts of the Holy See. Now that Francis had it published as part of his official teaching magisterium there is no doubt that he is teaching that adulterers can receive communion. So you may be at peace with a pope teaching heresy. I am not.

You can embrace his filthy teaching I will believe and follow what Christ and His Church have always taught. I am not listening to a dirty old bishop who is teaching that fornicators can continue living in sin and receive the Body and Blood of Our Lord in that state without amendment of life and sacramental confession.

I have not seen this story corroborated at any legitimate news source. Only right wing blogs like Church Militant, Rorate Caeli and 1Peter 5.

Well, it’s in the Acts of the Apostolic See on the Vatican website... I don’t know what is more legitimate than that.

Anonymous said..."I am aware you were quoting the cardinal. The cardinal made his remarks BEFORE Francis had his letter and the Argentine bishops take on AL published in the official Acts of the Holy See."

What was orthodox a few weeks, when Gerhard Cardinal Müller issued his declaration that pertained to the Argentine bishops' directive, remains orthodox today.

The Catholic Church in Argentina does not teach heresy.

My goodness, Marc, are you implying that all acts of the apostolic see these days are legitimate?

You're right, Henry. "Authentic" is probably a better description than "legitimate."

It's interesting that other news outlets aren't reporting this. It is probably the most significant news in the Catholic world since the advent of print media. This is the first time that a pope has deposed himself. And, as I expected, the world doesn't even gasp.

"Some three months ago I predicted that Pope Francis’ letter to the Argentine bishops, approving their implementation of Amoris laetitia, would make its way into the Acta Apostolicae Sedis. Now it has. An accompanying note from Cardinal Parolin states that the pope wishes the Argentine document to enjoy “magisterial authority” and that his endorsement thereof has the status of an “apostolic letter”.

"Fine. Let’s work through some points.

"1. Canon 915. It is crucial to understand that, today, what actually prevents ministers of holy Communion from distributing the Eucharist to divorced-and-remarried Catholics is Canon 915 and the universal, unanimous interpretation which that legislative text, rooted as it is in divine law, has always received.

"Neither the pope’s letter to the Argentines, nor the Argentine bishops’ document, nor even Amoris laetitia so much as mentions Canon 915, let alone do these documents abrogate, obrogate, or authentically interpret this norm out of the Code of Canon Law.

"Unless Canon 915 itself is directly revoked, gutted, or neutered, it binds ministers of holy Communion to withhold that most august sacrament from, among others, divorced-and-remarried Catholics except where such couples live as brother-sister and without scandal to the community.

"Nothing I have seen to date, including the appearance of the pope’s and Argentine bishops’ letters in the Acta Apostolicae Sedis, makes me think that Canon 915 has suffered such a fate."

Serious question: What is the point of having a pope if you don't have to listen to what he says unless he says it in a way that satisfies some canon lawyer?

If Dr. Peter's labored explanation--that the letter doesn't actually require heretical conduct, that with sufficient effort you can ignore its obvious intent and still act in a way faithful to the Gospel--doesn't convince you that the faithful deserve better than what it's now got, what would?