YOU KNOW THAT THINGY ABOUT HAVING NON BREAD FOR THE EUCHARIST DISCUSSED AT THE AMAZON SYNOD (I AM SURE THAT AMAZON WOULD LIKE TO SHIP IT TO THE AMAZON) WELL, NEVERMIND 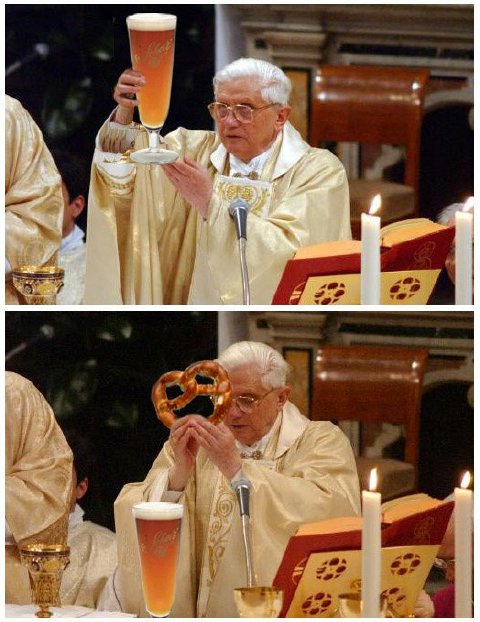 It seems like commonsense is prevailing in Pope Francis' papacy, at least for now, as it regards using non bread for the Most Holy Eucharist, which would simply make it blessed non-bread but not the Body, Blood, Soul and Divinity of the Risen Lord. But what the heck.

Yes, we do not need more controversy coming from this papacy!  The clergy and laity are at a saturation point with it all. Please God it will cease!

Vatican: Eucharistic Yuca Off the Table at Amazon Synod

The clarification comes after a Brazilian Jesuit theologian said that the October synod could consider the substitution of wheat with a host made from yuca, a root plant common in the Amazon.
Catholic News Agency
VATICAN CITY — Vatican officials have said there are no plans to discuss changing the matter of the Eucharist during an upcoming synod for the pan-Amazonian region of South America.
The possibility of changing the kind of bread allowed to be used in the celebration of the Eucharist does “not appear in the preparatory document for the special assembly next October and, therefore, is not a subject of the next synod,” Bishop Fabio Fabene, undersecretary of the General Secretariat of the Synod of Bishops, told CNA Friday.

The clarification comes after a Brazilian Jesuit theologian said last month that the October synod on the Amazon could consider the substitution of wheat bread in the Eucharistic species with a host made from yuca — a root plant common in the Amazon.

The exclusive use of bread made from wheat and wine for celebrating Mass is explicitly regulated by the Church, with any other material defined as invalid matter for the sacrament.
Jesuit Father Francisco Taborda said Feb. 28 that a fundamental shift in the matter of the Eucharist was a likely topic to be addressed during the special session of the Synod of Bishops for the Pan-Amazonian region in October.

Speaking to Crux, Father Taborda suggested that because of the humidity in the Amazon at different times of the year, wheat bread sometimes becomes overly moist — something he suggested could justify a radical departure in sacramental teaching and discipline.

Father Taborda said that the decision to substitute the essential matter of Eucharistic consecration should be left to local bishops. Bishop Fabene told CNA that “the changing of the Eucharistic matter is the competence of the Congregation for the Doctrine of the Faith.”

Father Taborda is an 80-year-old theologian and an emeritus professor of theology at the Jesuit Faculty of Philosophy and Theology (FAJE) in Belo Horizonte, Brazil, where he taught for many years. He has written several books, including on the theology of the sacraments.

Father Taborda spoke to Crux while attending a seminar entitled "Toward the Special Synod for the Amazon: Regional and Universal Dimensions" held in Rome Feb. 25-27.

While the study session was organized by the General Secretariat of the Synod of Bishops, a synod representative told CNA that Father Taborda’s statements “are exclusively personal” and do not represent official plans.

The teaching of the Church on the essential matter for the consecration of the Eucharist is closely regulated. Canon 924 §2 of the Code of Canon Law states that the bread “must be only wheat.” Similarly, the wine used must be natural and made from grapes and mixed only with water.

Father Mark Morozowich is the dean of the School of Theology and Religious Studies at The Catholic University of America, an ecclesiastical faculty with special authority from the Vatican to teach theology.

Father Morozowich explained to CNA the principles that govern “enculturation,” or deference to local circumstances, within the Mass.

“The Church has always enculturated the liturgy,” he said. “This is something we’ve done through the centuries in every single place from the very beginning.”

Starting with the first ministry of the apostles, he said, “the Church lived Jesus Christ, proclaimed his cross, death and resurrection. The Church proclaimed Jesus Christ being present body and soul in the elements of the Eucharist.”

He said that there have been, and continue to be, some regional differences in the matter used in the celebration of the Eucharist, but those differences are limited by the Church’s doctrinal teaching.

“Both are different but yet both are valid matter, according to their own ritual tradition,” Father Morozowich said. “This is something that has been going on for 2,000 years.”

“Some people talk about the use of something else besides wheat flour or the use of something besides wine in the Eucharist; one important part of this is certainly about [remembering] what we are expressing in this prayer, but there’s a continuity to the sacrifice of Christ when he was on this Earth. That basic principle needs to be reflected in all these discussions.”

The Mass is not, Father Morozowich said, about enacting an exact historical recreation of the Last Supper, “but at the same time the Church has said there are some core elements of this reality, of the presence of this way the [Christian] community has celebrated throughout its lifetime.”

“The Church needs to be very cautious with what are the latest ‘fads,’ if you will,” he said. “The Church is very concerned to present the culture and the prayers in a way that is telling and faithful to the way they have been lived through the centuries.”

Even within the differences between the Latin and Byzantine Rites, he said, there is an essential continuity of Eucharistic matter.

“These are essential, so that as the believer celebrates the Eucharist and reflects on the institution of that Eucharist, they have a sense of a transcending of time and a sense of the True Presence that is mediated through these specific elements.”
Posted by Fr. Allan J. McDonald at Saturday, March 09, 2019

The cynical interpretation of this is that the Vatican is faking "right" on this, before it goes "left" on ordaining married men as priests.

I wonder if Bishop Schneider said something to change mind(s) at the recent meeting with Francis.

When I was in college in the late 60s, one of my friends was enrolled in Niagara University, which still advertises itself as a private, Catholic university affiliated with the Vincentian order. He told me of a mass he went to in one of the dormitories where the priest, apparently to show he was "hip" and "with it," celebrated the Eucharist with Parkerhouse rolls.

My friend thought this was cool; I was aghast. But perhaps the Vincentian's have their own rite like the Byzantine Churches? Anybody want to bet?

They also have a non-Christ for their Christology.

If the question was about defining wheat as the fruit of a grass versus the seed of a plant of the genus Triticum, the argument would be interesting. The root of a plant? I think the liberals go after wheat for a reason.