POPE FRANCIS GIVES THE TRADTIONALISTS A GREAT GIFT AND IN DOING SO HIS HOLINESS IS TELLING ALL CATHOLICS, ESPECIALLY BISHOPS, THAT WE NEED NOT FEAR TRADITIONALISTS LIKE THE FXSSP BUT EMBRACE THEM AS THEY ARE IN MORE FULL COMMUNION WITH THE HOLY FATHER THAN THE EASTERN ORTHODOX AND CERTAINLY PROTESTANTS 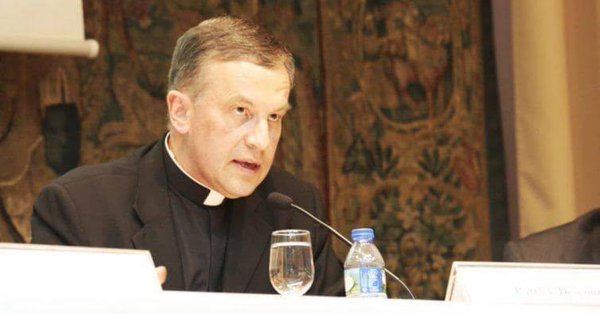 Another thing that galls me is progressive ecumenicism in the Church which loves to work toward inner communion and the like with Protestantism which has no valid sacramental system apart from Holy Baptism and Holy Matrimony and even Matrimony as a Protestant sacrament could be questioned on a number of grounds.

These Catholic ecumenists glow in admiration of the liberal Protestants and so desire to be like them or achieve greater harmony with them, yet when it comes to the FSSXP, who are in more communion, might I add, full communion with the Church, these traditionalists groups are treated as pariah!


Thus this is truly good news regarding this papal appointment and I would dare say it is better for the Church to become more like the FSSXP than the Anglicans, no?

From the National Catholic Register:

Msgr. Patrick Descourtieux, a former official at the now abolished Pontifical Commission ‘Ecclesia Dei,’ is a distinguished patristics scholar who is said to be sympathetic to the SSPX and traditional communities.

Edward Pentin
Pope Francis appointed on Saturday a French Vatican official to oversee the care of religious communities of a traditional nature, and to assist with the regularization of the Society of St. Pius X.


Msgr. Patrick Descourtieux becomes head of the section within the Congregation for the Doctrine of the Faith dealing with such communities.

He effectively takes over the responsibilities of Archbishop Guido Pozzo who was Secretary of the Pontifical Commission ‘Ecclesia Dei’ which the Pope abolished through a motu proprio (papal decree) in January.

A distinguished expert in patristics at the Institutum Patristicum Augustinianum in Rome, Msgr. Descourtieux worked for ten years as an official at the pontifical commission.

Vatican insiders told the Register March 30 that his appointment shows that the abolition of Ecclesia Dei did not mean an end to its duties as some had feared, but rather amounted to an administrative change.

They therefore said that the work of caring for traditionalist communities in communion with Rome, and seeking reconciliation with the Society of St. Pius X, are expected to continue as before.

In a March 30 article, the French traditional Catholic periodical L’Homme Nouveau described Msgr. Descourtieux as a man of “exquisite kindness and great discretion” who is “said to have direct access to Pope Francis.”

It also pointed out that the appointment means the SSPX will be able to deal directly with the CDF, something they had requested.

Msgr. Descourtieux has “always had the desire to help all traditional groups,” the article continued, but especially with the various representatives of the SSPX.


“His appointment has all the appearances of being a positive sign,” it added.

One source told the Register that the French prelate is “very sympathetic to traditional communities and the SSPX and has good relationships with them all.” He is a “good and clever man,” the source added, “has very good scholarship, and can manage the conversations about doctrine.”


In January, the Holy Father said he had decided to abolish Ecclesia Dei after “ample reflection” and having considered what he called the “changed conditions” today compared to those that led Pope St. John Paul II creating the body in 1988.

In his Jan. 17 motu proprio, he wrote that the tasks of the commission would be “entirely assigned” to a “special section” within the CDF that would “continue the work of vigilance, promotion and protection” carried out by Ecclesia Dei.
Posted by Fr. Allan J. McDonald at Sunday, March 31, 2019

Yes, an unexpected gift; Boy Howdy, I’m guessing MJK is gonna be all over this post, Father.

I know this may be a radical idea but why not promote unity within the Catholic Church first?Sounds like we are busybodies when our own house is in serious disorder. Beyond showing other faiths respect, let us deal with our problems.

I am no theologian but has PF just become an anti-pope?

Did not Our Lord teach us to "go forth and instruct all nations, baptizing them in the name of the Father, the Son, and the Holy Ghost?" So PF is a greater teacher than Our Lord? Now maybe his words have been twisted and he really did not say that we should not seek conversions.

Proselytizing any religion should be condemned and Francis isn’t the first to say it. We gain converts by attraction. But religious freedom is necessary for that. Francis is tight on this as have other popes been.

I'm not so sure that "proselytizing" has always had the same meaning and negative connotations that has recently been applied to it. I think the word used to have one meaning and way of using, but now we are all supposed to ascribe a new meaning and new use for it.

Perhaps the word is one of those "transitive" words I hear about.

And of course without classifying ourselves, there really is no reason to proselytize.

Somebody tell me again that Francis isnt pushing the NWO....

Here is an example I pose to Father McDonald

The late, great Bishop Fulton Sheen when he was young would go to the Deep South, set up a street booth and preach in the hope of converting non Catholics. Would that activity be considered proscribed proselatizing? Or is that attraction?

"If you don't become a Catholic you will burn forever in hell." Proselytizing

"Your Protestant faith us hollow, your preacher's words meaningless, and you "ordinances" without substance." Proselytizing

"We identify as Catholics. Therefore, our morals, ethics, and religious realities are FAR superior to your non-Catholic experiences." Proselytizing

Given Pope Francis' history, I can almost guarantee that some radical innovation is just around the corner. He always throws a bone to the trans and orthodox right before he makes another wild turn to the left.

"New Faith" makes me sick. Asia Bibi has more courage and conviction than almost ALL clerics and certainly Francis. Can anyone HONESTLY suggest that ANY of the Church Fathers, Paul, Apostles, martyrs, would even understand, much less agree with, somehow standing around and trying to be "attractive" to non-Christians?

Doing nothing, saying nothing, accompanying everyone, affirming all... guess what? THAT'S SECULARISM, otherwise known as "just be a good person."

Now, now Anonymous, you are being too harsh to those of us who do not understand the new definition of "proselytize."

You need to just "attract" us to your position and understanding of the word.

As usual, Anon K adds nothing to the debate but snark. I'd love to see the number of converts he has made.

It would be great if Father McDonald would respond to what Bishop Fulton Sheen did, since that might help us understand "attraction" better.

I meant to say TRADS (as in 'TRADITIONALISTS") and orthodox with a "small o". Autocorrection is vile.

The EO would probably say look at the fruits of one's own house before throwing certain words around....;;)....but it is true, one need not fear traditionalists. The three most dangerous words today are "Pope Francis says...."

Care to weigh in on Bishop Sheen's style of seeking converts? Proselytizing or attraction?