WHEREIN FATHER ALLAN, AKA, MCDONALD RANTS ABOUT THE INFECTION OF SYMBOLISM IN SANCTUARY REORGANIZATION AFTER VATICAN II

You may have to enlarge the photos to see what I mean. In terms of the first photo, Savannah's cathedral, if you remove the magnificent new free standing altar and the priest and deacon chairs behind it, you would note the Cathedra (bishop’s Chair) is three steps higher than the floor of the sanctuary which is three steps up from the nave as it was prior to Vatican II. If you look behind the new but extremely out of proportion ambo, you would note it too is three steps up into it (the old marble one, much smaller was one step up, in proportion to everything else and easier for older people like me to mount!).

The old high altar, the symbol of Christ, which the cathedra and ambo are not, is FOUR steps up, thus assuring in symbol that it, a symbol of Christ, is the highest and most prominent in the entire cathedral! Although there are other side altars and chapels with altars, none are four steps up from the ground floor of the sanctuary.

Rome, we have a problem, a post Vatican II INFECTION! Even the priest’s chair behind the new altar is higher than it!

But the infection attacking this symbolism and killing it is the new altar. While strong, beautiful and copying the high altar behind it, its placement is on the main floor of the sanctuary, three steps down from the cathedra and the ambo, makes it the lowest of the three!

In addition to it, since it is on the main floor of the sanctuary and not elevated from it, it cannot be seen by the congregation when standing except for the first set of pews. And indeed, when entering an empty cathedral, one's eyes are still drawn to the old high altar first, then the cathedra and oversized ambo. The new altar is almost invisible from the back of an empty cathedral

And the cathedra, new altar and ambo are in a line from cathedra to ambo, crammed together as it were with very little space in front of the new altar for other Cathedral liturgies.

Below the Savannah Cathedral is a photo of an Irish ☘️Cathedral’s reoriented sanctuary, a beautiful brass rood screen is placed in front of the magnificent old high altar to hide it (at least it wasn’t ripped out)! The bishop’s cathedra is placed in front of it, dead center and the new free standing altar in front of it but much lower. What does this symbolism tell you?!? 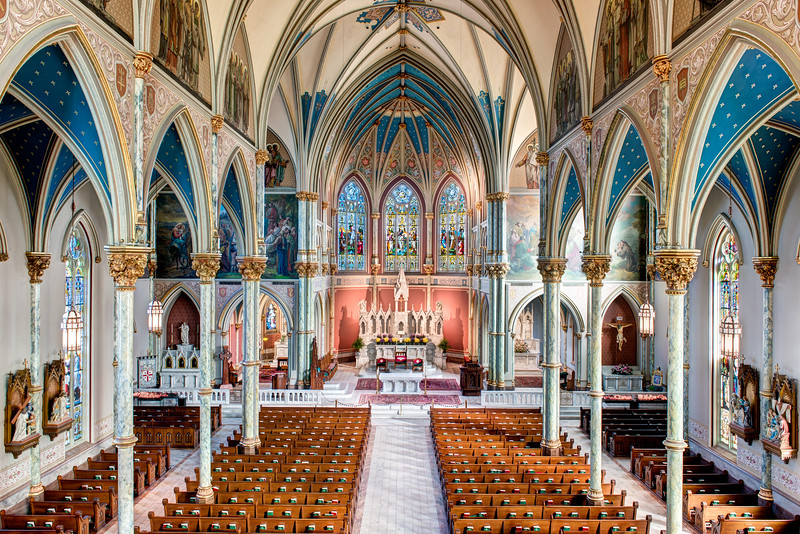 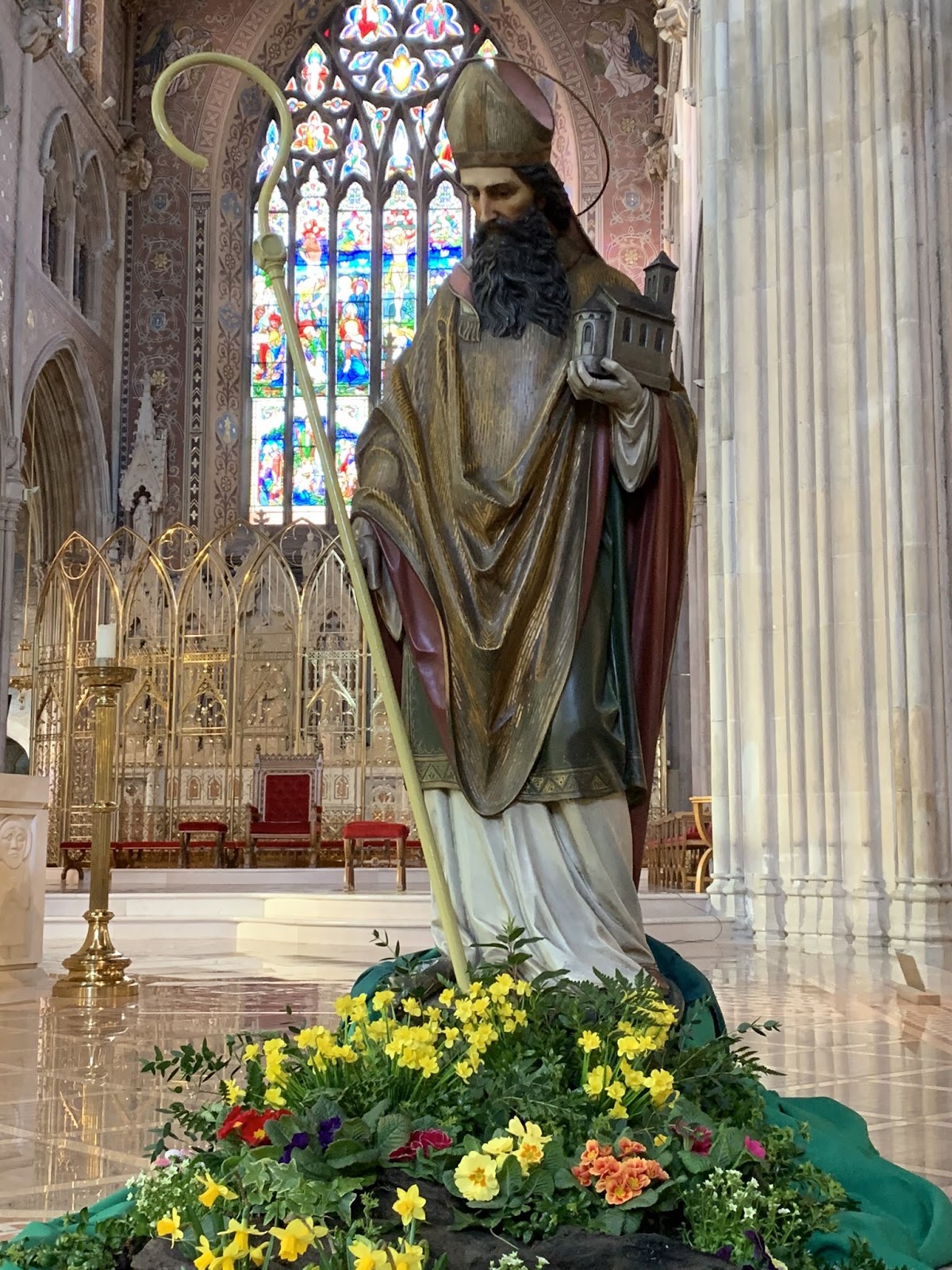 "What does this symbolism tell you?!?"
Clericalism of the most vile kind. The clerics are the ones who are the most important in the liturgy. This clericalism demands that they face the people when giving them sanctification, or sit on high thrones when they need to rest from their rough work. Without these it would be too humiliating for liturgical pop stars.

The mother church in our area, St Augustine, Minster, Ohio went from this in about 1910 or so

to this, in the fifties, Fr at the time had the sanctuary windows closed, he didn't like the sunlight in his eyes at mass, huge marble high altar, and all marble sanctuary including railing top

to this in the 80's, for a long time Fr Ricks chair sat where the baptismal fount sets, he used to sit in it like Caesar, high up on the steps, slumped on one elbow with his legs crossed, I was waiting for the slaves to start feeding him grapes

only reason the rail is still there is because they couldn't afford to patch the marble, pattern is impossible to match.
Personally the baptismal fount don't belong there either, Mary guards her son in the tabernacle
regardless that marble high altar is impressive, at least whats left of it

Well, I still like Savannah's cathedral better than the state's "other one" in Atlanta, which is too small, with tight pews and dark/gray inside. In 2005, the current archbishop installed a new "table" altar (metal), which you can see through. But there are no chairs or benches blocking the main altar. The priests and altar servers, when seated, are at the side.

Does St. Johns the Baptist still draw big crowds on Sunday? Just wondering because its intown location is not as convenient as suburban churches---and there is always the issue of parking.

Cathedral is a strong parish. However the tourists help to fill it each Sunday. Parking is an issue!

Well this Church still has all of the indicia of a Catholic sanctuary, unlike what the evil Rembert Weakland did to the Cathedral in Milwaukee, a true disgrace (just another tyrannical liberal).

The brass fence is not a rood screen since there is no rood.

well I'll throw this one at you
St Henry at St Henry Ohio, 7 miles from me
before

Yes they pulled the pipe organ out of the loft and put it in the sanctuary, all that is left of Mary is her face and hands coming out of the wall like she is buried in the plaster, same with stations of the cross, like they took a saw and cut 75% of the back of the statue off.
The Priest that was responsible for that atrocity was sent to our little country parish next, what followed is a good story for another day, lets just say he got out maneuvered big time, but it was touch and go for a while, wanted to gut the church, damn stubborn Germans got in his way

Beautiful brass screen. Simple for a subsequent bishop to remove.

Glad to hear the parishioners didn't cave to this loon. Maybe a good whipping or tarring and feathers would do him some good. Clericalism on steroids

Egytian, You are welcome to Holy Family for any sung Mass to review our restorations. It was not extensivly recovated but it was a close call. (daytonlatinmass.org).

If anyone knows the rationale for the screen being placed in front of the high altar in the Irish cathedral, I would be interested