IS KISSING THE PAPAL RING AS HAZARDOUS TO ONE’S PHYSICAL HEALTH AS DRINKING FROM THE COMMON CHALICE? 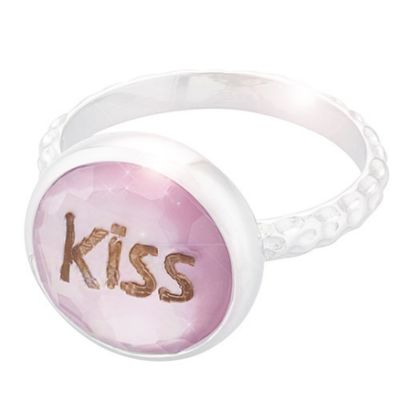 IS POPE FRANCIS HEROIC ATTEMPT TO KEEP MULTIPLE FAITHFUL FROM KISSING HIS RING, ONE AFTER THE OTHER TO PREVENT THE KIND OF DEADLY VIRUSES SIMILAR TO  THOSE FOUND ON THE COMMON CHALICE!
Posted by Fr. Allan J. McDonald at Monday, March 25, 2019

It's almost as if this is yet another sign meaning something or other......

In fairness though, Francis did allow ring kissing in this case:

He's not wearing his papal ring (he's wearing his episcopal one instead), so maybe that's got something to do with his odd behavior.

“He's not wearing his papal ring (he's wearing his episcopal one instead), so maybe that's got something to do with his odd behavior.”

I don’t know how to respond to the above statement charitably but I’ll try. No pope has ever worn the official “ring of the fisherman” as their everyday episcopal ring since the Middle Ages. This includes Pope Benedict. The real “Ring of the Fisherman is actually a ring that is used to seal with wax Papal Bulls. Which means the raised engraved seal is backwards so when used to seal documents it’s right side up. Like so many things since Vatican II that was discarded for a stamp. Look at all of the Bulls appointing bishops to their sees, you will see the seal is a stamp. Andddddd, trying to be charitable all bishops wear an episcopal ring which, until Vatican II, is customary for Catholics to venerate their office with a kiss. It’s not haughtiness it’s a Catholic practice based on centuries of tradition. It’s what Catholics do. Why can’t we do what Catholics have ALWAYS done! I am so sick of endless change based on the whims of some arrogant prelate. It wasn’t the faithful that called for the changes of Vatican II or the Holy Spirit. It was arrogant, liberal men who hated Catholicism. That’s why it was done.

That is so rude! He is embarrassing those people. There crime? They are showing him, and his venerable office, reverence. The true act of humility is to accept it, regardless of what you think about it.

This much touted by the world as the most humble pope everrrrr is far from humility and since day one and in most of his actions. The most humble thing this pope has done is the few times His Holiness has celebrated Mass ad orientem.

"Although Pope Benedict XVI wore his Fisherman's Ring daily, it is no longer the custom for popes to wear it at all. Generally, a new pope will either inherit the daily-wear ring of his predecessor, keep an old ring of his own preference, or will choose a new daily-wear style. Pope John Paul I usually wore a wide gold band similar in design to the mitre-shaped Second Vatican Council ring; in imitation of this, Pope John Paul II wore a wide gold crucifix shaped into a ring that had belonged to Pope Paul VI.

Generally, popes of the past wore episcopal rings in keeping with the fashions of the time. Pope Pius XII, for example, often wore a heavily ornate ring set with a stone. Pope Pius IX most often wore a cameo of himself, made entirely of tiny diamonds, whilst Pope Pius X wore a simple, smaller stone-set ring. In keeping with the modern spirit suggested by Pope John XXIII and actually practiced in his later years by Pope Paul VI, Pope Francis wears a simple gold-plate silver ring only for papal ceremonies, preferring his small, silver ring from his days as a cardinal."

Humility gets a bad rap.

Humility does not mean "I never make people uncomfortable."

Humility does not mean, "I always do what other expect me to do."

Humility does not mean, "I am to do what some others in my position have done."

The more I think about this, the odder the behavior seems.

In the case of ring kissing and a pope, this is basically equivalent to someone extending their hand for a handshake and being utterly rebuffed.

It is very peculiar and people are laughing in the background and the pope himself seems to be “tickled” himself, as we say in the south.

During the 1950s, the following ring-related controversy had gripped the world.

More on that 1950s ring controversy.

Hahahaha! Humiliating and embarrassing people who are showing you respect and love is so FUNNY!

Maybe the pope's MC can throw a banana peel out from time to time, too? Won't that be a gas?

Fr Fox made me laugh. I suspect it was a malapropism intended as a show of egalitarianism. “Don’t kiss my ring!! We are friends in Christ!!” It just got snipped in a bad way. Poor man can’t win.

I dont think Mark Thomas was (in this case) making light of our concern over the actions of Francis. I think he was trying to be funny.