I KNOW! I KNOW! I HAVE AN ALLIGATOR 🐊 OBSESSION SINCE MOVING TO THE COASTAL EMPIRE AND LOW COUNTRY. BUT WITH STORIES LIKE THIS WHO CAN BLAME ME?

Two of my backyard neighbors: 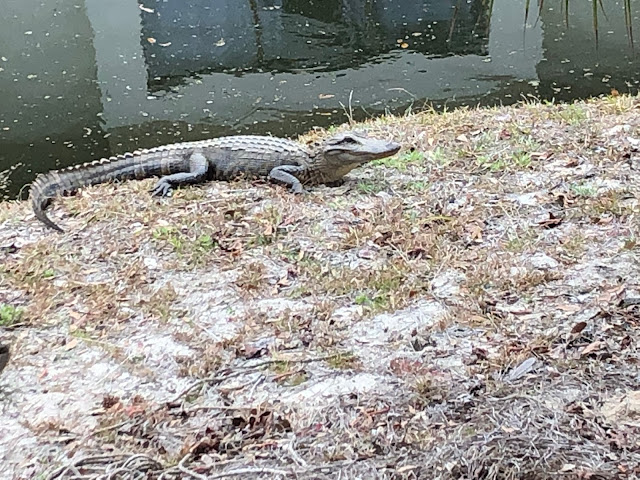 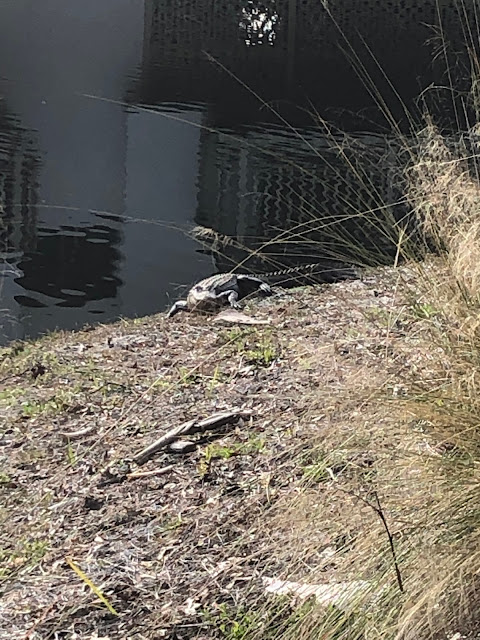 Alligator found lying upside down on U.S. 278 in Bluffton

An alligator was found lying upside down on its back on U.S. 278 in Bluff-ton after a car struck it sometime Friday, according to a Beaufort County Sheriff’s Office report.

The deputy discovered the alligator around 11:20 p.m. near Bluffton Road.

The deputy then killed the alligator with a single shot of his duty weapon “ending its distress,” then moved it away from traffic to the shoulder of the road, the report said.

Sheriff’s Office spokesperson Maj. Bob Bromage said deputies take the same action when a deer or other animal has been severely injured and is blocking traffic.
This size of the alligator was not listed in the report.

Before shooting the alligator, the deputy called S.C. Department of Natural Resources, who said they did not need to respond to the scene, the report said.

Alligators in South Carolina begin moving more in the springtime as they come out of winter brumation (which is like hibernation) to migrate into warmer waters, according to DNR. The animals’ movement patterns also change as it gets closer to mating season.

Last May, a mother and her two kids were killed in a fiery wreck after their car hit an alligator crossing I-95 in Orangeburg County.

In July, an 8-foot alligator crossed the road near Compass Rose Park on Hilton Head as Sheriff’s Office deputies directed traffic around the animal.

A month later in August, a Hilton Head woman was killed by an alligator while walking her dog near a pond.

DNR officials urge the public to keep its distance from alligators and never feed them. Anyone who sees an aggressive or dangerous alligator should contact a DNR official.

Two summers ago, we had a five foot gator sunning out on my beach at Lake Sinclair. I called DNR and they said, "We can't come out unless the gator attacks a human or livestock." Can you believe that. So, I called the Sheriff and told him I had called DNR. His response, "Well, you may as well have called the cat." He told me he did not care if I shot it, as long as he did not see my picture in the paper holding it up by the tail. I did not want to shoot it, but I have grandkids and dogs. When I got back down there with my rifle, he was gone. I learned later that the guys at the fire station by the lake saw him and called some guy who captures them and re-locates them. So, the gator has a happy new home. I'm glad. I like gators (not the U. of Florida kind).

You da man!!! Glad there was a happy ending.

Gene, you must be at the upper end of the gator range in Georgia, the Fall Line along Lake Sinclair. Gators would be bad news for the lake above you, Oconee, with the fancy Ritz resort and beach. Sometimes they are spotted in Augusta too, like at Lake Olmstead, just east of Augusta National. Raes' Creek cuts thru the National, but haven't heard of gator reports there, more likely, snakes.

Occasionally we hear of gators in Atlanta's Chattahoochee River, but more likely they are dumped in there when some fool finds the gator is too big to keep at home. But the water is very cold, as it comes from bottom of Lake Lanier---can be 40-someting in the water in winter, not exactly gator weather!

I used to live in South Carolina and recall complaints when Yankees would find gators in their new back yards, as if they were moving to a place free of dangerous critters! Guess gators can't survive those New England winters!

I grew up in Macon and was always in the woods and down by the river catching snakes and turtles.This led to a life-long study of reptiles and amphibians. We used to see gators fairly often in the Ocmulgee south of Macon and up around the old Macon water works. We saw a couple of fairly big ones, maybe five feet or so, and a nine foot one was seen and photographed in Bond's Swamp back in the 60's. My friend and I heard the "roar" of a full grown male once, but did not want to try to find what he looked like. LOL!
Adult ones have no natural enemies other than man, and the little ones are very adept at hiding and have good camouflage. They can hibernate but, if they roam too far north, it is pretty easy for them to hitch a ride on the current to get back south. Do be careful...they often move without warning and can outrun a man easily for short distances. They are extremely quick, and can outrun dogs(a favorite meal) over short distances. Their brains are small so, if you have to shoot one, aim for the eye because it is a direct path to the brain...or use buck shot. If you cannot do that, aim behind the shoulder like you would for a deer. Usually, if you just leave them alone, they will eventually go away. A crocodile (we have very few of those), not so much...mean and aggressive. BTW, an alligator is just a sub-species of crocodile, but they have somewhat different temperaments.

Gene, I wonder if about 500 miles to your south, the Burmese pythons may be giving the gators a run for their money in the Everglades?!? I suppose around Macon and the Ocmulgee, they are well fed with frogs, fish, snakes and turtles in the area! Recall a few years ago some Mercer students took a trip down the river and got marooned in some area perhaps toward Hawkinsville---someone said they were lucky not to get eaten alive by the wild hogs in the area too, never mind the numerous poisonous snakes in abundance!

Gators are exciting to see in the wild. They are really quick although I have never seen one run far. Usually just jerk over to grab something. The scary thing to think about is how many big ones the find in places you didn’t see any.

Anon @ 5:38, We used to spend as lot of time in Bond's Swamp when we were in HS and at Mercer. We camped, canoed, and caught snakes, etc. We always went armed (mainly for people), but never had any trouble. However, we saw both cougar and bear tracks, and alligators were not a rarity. The river swamp is a huge expanse of wilderness that extends pretty far south and east along the Ocmulgee. We saw several wild hogs, but they usually just run away if they have any warning.