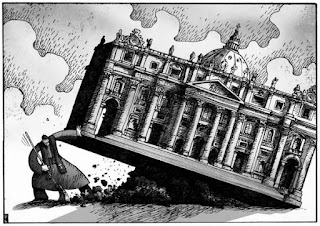 Here you go. This is heterodox rot in the Catholic clergy and laity:

As a cradle Catholic, and as a mother and a grandmother, my response to the Cardinal Pell conviction is, as for others like me, deeply complex.

For weeks I have been unable to bring myself to attend Sunday Mass.

Almost daily I wake to a deadening of the heart as yet another story of abuse of children by Catholic clergy emerges, here and internationally. Catholics like me are in grief.

Cardinal Pell is an unsympathetic character, described as having a pathological lack of empathy, and emblematic of a church that is out of touch with its people. And yet he is a prince of the church: the only ranking higher is that of the Pope. How unthinkable that he has been convicted of abusing children.

I see myself as a liberal Catholic – loosely connected to St Carthage’s parish at Melbourne University, where the much-loved Father Michael Elligate ministers to a flock from every corner of Melbourne. When I go to Michael’s Mass, I come away with a thought about how to live my life – an opportunity for meditation on the deeper things.

I abhor the arrogant male exclusivity of elements of the church and long ago relinquished
any regard for the dogmatic pronouncements from the Control Tower. And yet, and yet … something keeps me connected.

For me, it is a love of the ritual, something deep in my racial memory, and it’s the goodness of so many clergy and religious, the 93 per cent who are not abusers. Perhaps it’s also the debt we owe to generations of nuns, priests and brothers who gave us a start on what became fulfilling lives as successful professionals. Many in public life operate from principles of social justice imbibed in this system.

Ummm....it is something like 99.9% of priests who are not abusers. The anti-Catholic media has won again with fake news.

I think Cardinal Pell has great empathy for others. That is one reason why he is such a great defender of the Truth.

Cardinal Pell was vocally anti-Global Warming. This is probably the political left's revenge

In 2011 Cardinal Pell opined, "Carbon dioxide does not destroy the purity of the atmosphere, or make it foul or filthy. . . It is not a pollutant, but part of the stuff of life.”

Well, science-denying Pell, try living in a chamber with higher concentrations of CO2 for an hour or so. "The condition of excess carbon dioxide concentration in the blood is called hypercapnia or hypercarbia. Symptoms of carbon dioxide toxicity include high blood pressure, flushed skin, headache and twitching muscles. At higher levels, you could experience panic, irregular heartbeat, hallucinations, vomited and potentially unconsciousness or even death."

Arsenic and lead are also "part of the stuff of life." Shall we add them to the Good Cardinals's menu?

LOL - the "science" (aka left-wing ideology) on Global Warming isn't settled. But the science that abortion kills a human life is, but you keep voting for the abortion droolers.

TJM - You have a faulty notion of how science works - no surprise there.

From the blog KevinMD.com: "Science is in a constant state of flux. Theories are put forth to explain natural phenomena, based on the best knowledge of the day. These theories are tested. If they correctly predict future observations, the theories become more credible. If, however, these theories fail to predict accurately, they require modification or outright dismissal.
What is considered “settled science” one day may be turned upside down the next day as new data comes to light. At one time, it was “settled” that the sun and stars revolved around the earth and that the earth was flat. As science advanced and new data was gathered, these “settled” theories were scrapped.

You must lack basic reading comprehension skills. I said the science is NOT settled on Global Warming, but the political left in this Country says it is. As a matter of fact my former pastor, a left-wing loon and Dem operative masquerading as a Catholic priest, put it in the Sunday bulletin. I wished I had saved it for a laugh and so I could send it to folks like you.

But the science is settled on the unborn being aborted. If you perform an abortion they will die but many false catholic priests and bishops simply do not care. The Minimum Wage or Global Warming is of greater import in their sick world.

TJM, I wonder why the Dems aren't for MORE global warming. Think of the deaths, lots of children included.

No, I understood what you said. "LOL - the "science" (aka left-wing ideology) on Global Warming isn't settled."

I reminded you that "settled science" is a fallacy pushed by those who do not understand how science works. You're looking for "settled science" and it doesn't exist. You might as well join an expedition to find the Abominable Snowman. Or, with Cardinal Pell, you could move into an environment with high concentrations of CO2 and, after a few hours, explain to us how CO2 is just "part of the stuff of life." Or not.

Scientists work on the best available evidence. For example, the best evidence regarding vaccines is that they are beneficial, that they serve the Common Good. Is the science of vaccination "settled"? No. There are still unknowns, there are still outcomes from getting vaccinated that are unexpected or unexplainable.

But, based on the best available evidence, it is eminently reasonable to vaccinate children against disease.

Engaging in clericalism I see. You acknowledge that I do not believe that the science on Global Warming is settled yet you seemed compelled to lecture us on the very thing I said was not settled science.

Why? You mention vaccines, but you ignore the settled science that abortion kills the unborn, but persist in voting for the part that promotes this intrinsic evil and compounding your problems by continuing to masquerade as a catholic priest.

You raised abortion as a distraction, ad is your usual tactic.

What you "beieve' regarding climate change is irrelevant. The data stands on it's own.