YES, GOOD BISHOP, POPE FRANCIS AND EVERY WORTHY BISHOP MUST RECOVER THE PROPER USE OF PUBLIC EXCOMMUNICATION WHICH LEADS TO PUBLIC REPENTANCE AND ONLY THEN RECONCILIATION AND A RETURN TO FULL COMMUNION WITH JESUS, THE HEAD OF THE CHURCH

Though each of the four perpetrators were sanctioned, and some dismissed from the clerical state, “never have we ever heard any public manifesto of repentance or a request for forgiveness; only silence and their disappearance from the public scene,” Bishop Schmalhausen said, adding that victims and Catholic faithful “deserve something more as a measure of reparation. 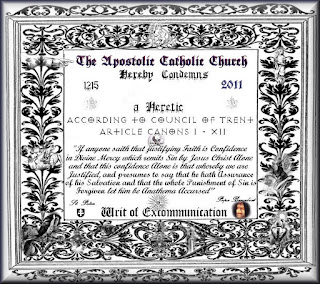 Finally a bishop is making sense about the high crimes and misdemeanors (in Church talk called mortal and venial sins) when it comes to cardinals, bishops and priests who betray their high calling.

Bishop Schmalhausen of Peru knows as most of us do that the former priest, Mr. McCarrick, aka, Uncle Ted (although that disparages uncles) should be excommunicated in addition to being removed from the clerical state (the proper term, not defrocked or laicized). Why? Because he must answer for his crimes against the Body of Christ. He must admit his sin publicly and then repent of it. And he needs to name names so that the Church can deal with the crimes of others who enabled his sexuality to go wild under the perversion of the clerical power of Holy Orders.

Once Uncle Ted, after having been publicly excommunicated with the proper reasons publicly stated, repents publicly, comes clean, then he can be restored to the full communion of the Church.

By the way, this should be done to Catholics in public life who betray their Church by promoting political agendas against the seamless garment of life as the Church teaches it as well as sacrileges against the Sacraments of the Church to include Holy Matriony.

Bishop Kay Schmalhausen of Ayaviri, Peru believes current punishments for both the crime of clerical sexual abuse (usually expulsion from the clerical state) and the cover-up are ineffective, and suggested harsher penalties including excommunication.

Using examples of abusers whose punishments he believes did not go far enough, Schmalhausen pointed to four recent cases:
• Marcial Maciel, a Mexican priest who founded the Legionaries of Christ and who was removed from active ministry by Pope Benedict XVI in 2006 but was never defrocked.
• Ex-Father Fernando Karadima, Chile’s most notorious abuser, who was sanctioned by the Vatican in 2011 after being found guilty of sexual abuse and defrocked by Pope Francis last year.
• Figari, who, though a layman, is currently awaiting new quarters after the community house he was living in was dissolved following a Vatican edict forbidding him from living with other members of the group. However, he has not been formally removed from the SCV.
• Theodore McCarrick, the former prelate and priest who, for many years, was a giant in the American Church, but who was recently defrocked after being found guilty of sexually abusing minors in 2018.
Though each of the four perpetrators were sanctioned, and some dismissed from the clerical state, “never have we ever heard any public manifesto of repentance or a request for forgiveness; only silence and their disappearance from the public scene,” Schmalhausen said, adding that victims and Catholic faithful “deserve something more as a measure of reparation.”
Posted by Fr. Allan J. McDonald at Monday, March 25, 2019

What would be the canonical basis for excommunication of McCarrick?

I don't always comment upon this blog, but when I do, it is to parody Anonymous 2.

Thank you World's Most Interesting Man for your valuable, insightful, and unbiased contribution to the discussion.

Is a parody of a parody still a parody?

I thought that was Anonymous 2's role?

Anonymous said...
What would be the canonical basis for excommunication of McCarrick?
March 25, 2019 at 8:09 AM