THE GLORIES AND COMMON SENSE THEOLOGY OF AD ORIENTEM 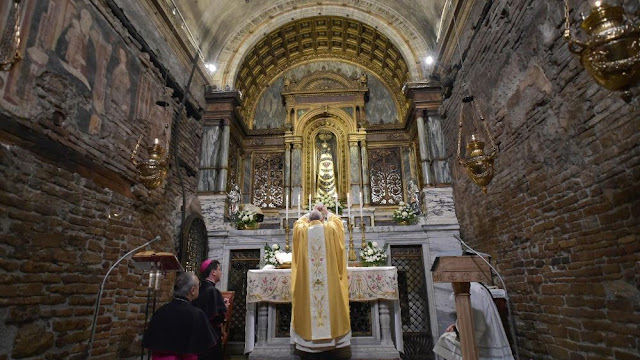 In the photo above, it is His Holiness, Pope Francis who is the celebrant. This is the chapel in the house of our Blessed Mother which is in the Shrine of Our Lady of Loretto in Italy.

If one did not know this is Pope Francis, and I think few would think it, this could be any bishop or priest in the world celebrating this Mass. That is the genius of ad orientem--the focus is off the human priest. He is covered by priestly vestments and his face is not visible.This eliminates the "actors' syndrome" of priests playing and appearing to be praying to the congregation in front of him. Ad orientem helps to reduce priestly liturgical narcissism!

The other thing, that is so symbolically powerful, (actually two other things, I'll mention the third in a moment) is that when you watch the video of Pope Francis celebrating this Mass, the camera is slightly above and in front of His Holiness. Yet, the Holy Father isn't playing to the camera; he may not even know it is there. He is praying! He is offering Sacrifice "in persona Christi" and he is leading those behind him as he intercedes before God on their behalf.

And now the third other thing. Facing at least symbolically the liturgical East, thus facing Jerusalem (and this is also accomplished in a less than perfect way compared to the actual liturgical east of the Church, by having a crucifix on the altar facing the priest when he faces the nave) is that we all, priest and laity, are "looking" toward the East where Christ  died, rose and will come again, just as the sun rises in the east. This is powerful and completely diminished when the priest faces the congregation and there is no crucifix on the altar for at least a less than perfect symbolic expression of facing the east.
Posted by Fr. Allan J. McDonald at Tuesday, March 26, 2019

But this would ruin things for Father Entertainer! It's all about him and his magnificent communications skills.