MODERN ARCHITECTURE FOR CHURCHES: WHAT COULD BE WRONG WITH THAT? 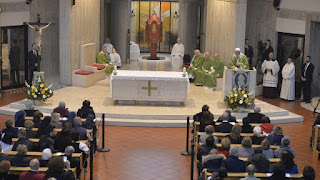 Pope Francis paid a parish visit in Rome on Quinquagesima Sunday, also known as the 8th Sunday in Ordinary Time.

From the picture above, let me first say what is good about it:

1. The priest's chair is to the side and the tabernacle is dead center
2. The altar is a strong symbol--in other words, it isn't a "table" it is an altar

Okay, that's all I can see as good.

Now the questionable and lamentable:

1. The priest's chair looks like a throne or a bishop's throne. In a parish church that is not necessary.

3. I am glad the tabernacle is behind the altar, but it is, in my most humble opinion, a bit much in size and look, but that is a statement of taste on my part as is everything I am critiquing because in the Ordinary Form, unlike prior to Vatican II, there are no real laws governing where things are placed in the tabernacle and porportionality as it is all up to personal tastes and the liturgical nazi that wants this, that or the other.

4. The altar placed forward as it is leaves no real room for other liturgies, such as weddings, RCIA rituals, blessings of various sorts. The altar is too low and thus not even visible to the majority of the congregants in a full church, except for those on the front rows, especially when standing.  And with other liturgies, like weddings, they would be on the nave level and invisible to all, even for the nuptials.

5. When altar railings are restored, it will be difficult to restore them here and that should have been an element for consideration. Altar railings should be present now that we have two forms of the one Roman Rite. Liturgical law for design of sanctuaries should reflect this!

6. One can tell that Msgr. Guido Marini was not present for the Mass with the pope because the MC who must be a parish priest did not set up the Benedictine altar arrangement which Marini certainly does when he travels with the pope even to local congregations.

7. The placement of the large and beautiful crucifix to the side without a crucifix on the altar for the priest to guide is devotional eyes towards the symbolic East, is ill thought. The crucifix should be central either on the altar, slightly behind the altar or suspended above the altar.

8. Finally and sadly, this kind of modern post-Vatican II architecture is quite common in Italy which in the pre-Vatican II era gave us the grandest of beautiful churches, basilicas and cathedrals. This is not renewal but corruption.
Posted by Fr. Allan J. McDonald at Monday, March 04, 2019

The Church is one, massive "bla." The tabernacle, though prominent, resembles a fancy mailbox.

What we discovered with "pie shaped" buildings is that, when the sanctuary is located in the narrowest vertex of the angle, the space is extremely limited. Not a great design, especially when you want a sanctuary large enough for the rites you mention.

Our Church in Dublin, Georgia, Immaculate Conception, is a square with the sanctuary in one of the four 90 degree corners. That works much, much better than the wedge or pie shape.

of course the crucifix is off to the side, we are celebrating the last supper not the holy sacrifice of the mass or crucifixion.
how very vertical of you we all know that the emphasis of the mass is now horizontal and an enclosed circle of friends with Christ in the periphery. Get with the time man
snark "off"

Well, Father, isn't your altar a "table"? Or has it changed in more recent pictures? If it has not been changed, is that because your bishop has not granted permission for a new one?

All Father McDonald needs to do, at a minimal expense, is to dress the altar with a frontal and use the Benedictine arrangement. It would look great!

I would hope that the priest uses one of the side chairs, rather than the main throne chair.