ANYTHING PECULIAR ABOUT THIS SPLENDID EF CHURCH? 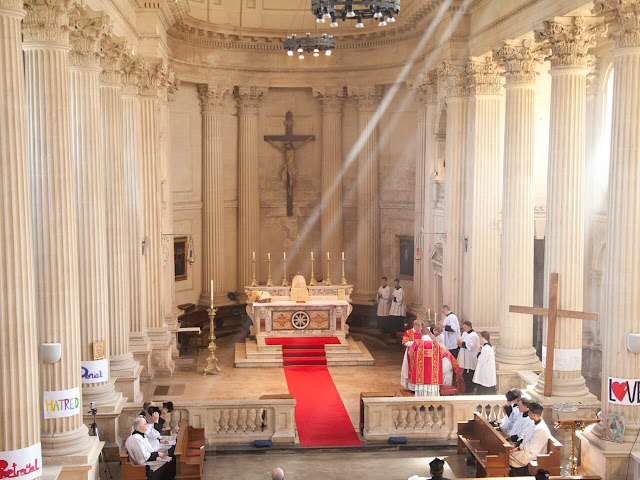 The competing red and blue sanctuary lamps are an abomination.

There's no debate!!! The competing sanctuary lights are an abomination.

If you disagree, you are an apostate, high on laity steroids, a supralapsarian Calvinist, most likely a Collyridian heretic, and that kind of philistine who serves the Cabernet chilled!

Begone, before someone drops a flabellum on you!


The tacky magic marker painted paper signs wrapped around the columns are a bit out of place in the EF setting.
Bro. Augustine

Also out of place in an EF setting are ELECTRIC LIGHTS!

There is NOTHING in the venerable, immemorial, traditional, "mass of the ages" reality that admits of new-fangled electricity being used to illuminate church buildings.

Add to that SOUND AMPLIFICATION! There are microphones on that music stand on the lower right. Pope Pius V is spinning in his grave.

Also the Hatred poster is in the gay colors. Interesting in an EF Mass no?

The tacky handmade banners are totally out of place.

I thought nothing of the plain cross on the column as I have seen this in several churches during lent. I thought perhaps the same here depending on when this photo was taken.

The "hatred" poster is a few colors short of the spectrum.

I think Anonymous K is a few short of a spectrum

No, Father, I don't see anything peculiar about this church at all. It's pretty much the standard mishmash of legitimate and de-Catholicizing accouterments most churches sport these days. Churches, like life, as Forrest Gump once quoted his mama, are 'Kinda like a box o' chocolates...you never know what you're going to get....'

I think it's interesting to note the rainbow created by God has 7 colors: red, orange, yellow, green, blue, indigo, and violet.

The Rainbow flag used by the homosexuals has 6 colors, as noted above by the astute Anonymous.

Make of it what you will.

(Now, let me go ahead and bet Anonymous will start arguing about whether there are really 7 colors in God's rainbow...blah, blah, blah. Spare us, please.)

Bee, since you asked, the spectrum is made up of many more colors than the seven we commonly describe, since the definition of color is based on the wavelength of light that produces them and there are many more than just seven wavelengths of visible light.

Why, just on the blue end of things there are blue (NCS), azure, Munsell 5B, blue (RGB primary), indigo, and violet.

The original (middle to late 1960's)rainbow flag had eight stripes with pink and turquoise added to the one commonly in use today. By 1980 it was reduced to the six stripes.

"Make of that what you will" sounds ominous! Pink was dropped because the Paramount Flag Company in San Francisco had difficulty obtaining the color fabric in the early days of production. Turquoise was dropped later since, when hung vertically on a lamp post, that stripe, being in the middle, was obscured by the lamp post.

But of course, you're all too smart to take a bet like that, knowing who we're dealing with.

What's great is that he gives me many opportunities to practice patience and self-control during this season of Lent. That at least is good for something. :-)

Oh, I think you did.

Not good form to contradict a fine lady like Bee, but that is who you are.

When I was a child we used to be told that the Protestants had taken Our Lord off the cross. When I got older I realized that the plain cross on the altar flanked by only two candles, a feature of Anglican churches, was actually derived from the Use of Sarum. Processional crosses likewise did not have a corpus, although by the later Middle Ages the rood loft would have featured Christ crucified.

I know that Anonymous was being sarcastic when he talked about electric light (the London Oratory has been lit by electricity since it opened in 1884) but he has a point when it comes to electronic amplification. It should not be used in the traditional Roman Rite; first of all it is unnecessary, and secondly it can seriously distort the liturgy. I once attended a Low Mass celebrated at the High Altar in a large church. The parts spoken aloud by the celebrant could be clearly heard, even at the back, whereas the server's responses were inaudible.

I can't see the point in having red and blue sanctuary lamps. The tabernacle veil should be in the liturgical colour, and there should be a crucifix on the gradine between the candles.