THE PERSECUTION IS UNDERWAY AND COMING TO A NATION NEAR YOU! 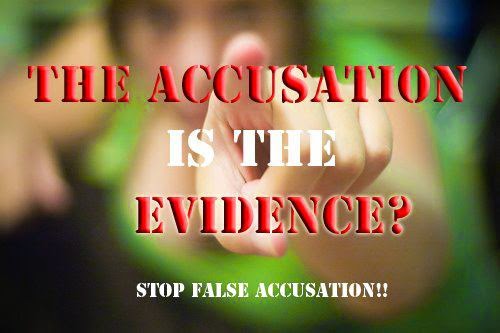 There is a great deal of righteous anger in the Church and society in general about the unveiling of the sex abuse scandal in the Church.

Committed Catholics, both clergy and laity, should acknowledge the anger which is righteous but pray that it does not turn into rage that destroys others or ourselves, especially the gift of Faith God has given us.

But the sober reality is that anger and rage is turning into vengeance, getting even and promoting an anti-Christ, anti-Church, anti-Clerical mentality. By anti-clerical, I mean hatred for the clergy, be they good, bad or indifferent, pope, bishop or priest/deacon.

This opens the door to opportunism. The liberal heterodox in the Church can promote their version of renewal which is in fact heterodoxy and a source of the melt-down we have experienced this past year. However, the perverted can hide behind the facade of traditionalism and conservatism to wreck havoc as will.

Quite frankly, the high pedestal that priests and men and women religious were placed upon prior to Vatican II was exaggerated and made them into "gods" who knew it all and the laity into children who were in awe and wonder of their clergy and religious. In the post-Vatican II environment of liberation from all discipline associated with the pre-Vatican II clergy and religious, monsters took advantage of their status and an unsuspecting laity, especially the more smitten and passive, were abused in many ways.

But there is a more dangerous opportunism. It is the political opportunism that we see playing out in secular countries of Europe and now especially in Australia. They use the Achilles tendon of the Church's mismanagement or disinterest in dealing with sexually abusive priests and bishops  to neuter the Catholic Church's role in the public square as it touches on many issues, but especially the LGBTQ issues as well as contraception, abortion and euthanasia.

This virulent secularism is going to be like the Roman Empire of the early Church or what communism tried to do to the Church--destroy it.

There is evidence that Cardinal Pell, now a convicted pedophile/felon was prosecuted and convicted with almost no real evidence to support the verdict other than a "he said, he said" scenario.

Are false accusations that led to a conviction done so for political reasons, or for revenge where Pell is the scapegoat for the abuse crisis in Australia.?

Yes, it is hard for me to believe that bishops and priests can abuse a child or take advantage of a child. I would prefer to believe it isn't true. But in many cases it is true unfortunately.

But are we naive about those who bring accusations against someone being truly honest about it?

Everyone, especially those with a political agenda wanted to believe the worst about The Covington Catholic High School kids. But these charges were trumped up as a political ploy against President Trump and his agenda.

Everyone, especially the media wanted to believe the false accusations of the movie star Jussie Smulett. Why? Because he is a victim and victims always tell the truth, except when they aren't a victim and aren't telling the truth.

Why do people make false accusations? For political reasons, for religious reasons, to get even, a mental illness and so on and so on.

When the state gets involved in fomenting a persecution against the Church for political ideologies be prepared to be a martyr or a turn coat.
Posted by Fr. Allan J. McDonald at Thursday, March 14, 2019

If Cardinal Pell had only said gays were swell, he would have been acquitted. Even liberal John Allen said the "facts" presented to convict Pell defy reality. Pell's only mistake is that he did not properly assess that Australia has become a land of left-wing loonies out to get the Church. The smart money would have told him to remain at the Vatican.

I have a tangential experience of priestly abuse and someone who may have lied about being abused to get the money. A male cousin of mine grew up nearby, and the family went to the same parish as I did. His mom was a widow with four kids, two boys and two girls. In the 1970’d and early ‘80’s her kids were attending grade school at the parish. About this time there was a priest at the parish who often befriended young pre-pubescent boys and would have them into his room to play the pinball machines he had there. It seems he often targeted kids without dads, and the moms were exceedingly grateful for his interest and for taking their sons under his wing.

In the 2000’s the priest was credibly accused of molesting one of the kids he befriended. He pleaded no contest, but said it was only to spare his mother the trial. He was removed from priestly ministry. A few years later, when my male cousin was about 28 and after his mother, who was a very good and traditional Catholic, died, he found a lawyer and claimed the priest had molested him. There was no trial, and the Archdiocese settled out of court for I think around $875,000.

Now, this kid was a drifter who never got his life together. He hung with gangs in his teens, took drugs and sold them too. He went into the Army for 4 years, but never was able to secure good employment once he got out. After his mom died his inheritance was put into a trust controlled by his sister to prevent him from dissipating it all at once.

So the settlement money was also put into a trust fund, and only doled it out piecemeal to him, but he was able to buy a nice house in the suburbs and he just pretty much did nothing. He was supposedly attending AA meetings, and supposedly had been clean and sober for 5 years. Until the day (when he was 36) he was found dead in his car in the driveway. The autopsy showed he died of a drug overdose. At the funeral, lots of his friends from AA told us they thought he had been using again, and pretending not to.

His sister believes he may have indeed been molested, but the priest denies remembering him, even from seeing him around the parish. I have a feeling my cousin saw an opportunity, knew he fit the profile, and the Archdiocese just settled. I think he had no ethics, and had no qualms about lying to get a bundle of money in order to support himself and his drug habit. But only he and the priest know for sure if he was truly molested. His mother would have been mortified. I doubt she would have let him bring such a case, because she knew what he was, and that he would steal from anybody.

So yes, some "victims" do lie. They have a variety of motives, and sometimes there's no way to determine the truth.

Just Pakistan's anti-blasphemy law a convenient way of removing undesirables with meager witnessing, the whole anti-Cdl Pell affair started in earnest after his inquiries discovered irregularities at the Vatican Bank, inquiries that were subsequently quickly stopped. Could this be a possible hit job by some at the Vatican, like a lavender mafia that has a hand in the Vatican bank to finance its drug and sex parties? I do not like coincidences like that.

It is a strange land we have come to inhabit where "Perception Is Reality."

For some, the perception today is that priests and many religious leaders are hypocritical, if not outright dangerous. This sentiment is found in those who, on the extreme Left, despise notions of faith and religion, and in those who, in the extreme right, denounce any theology, liturgical development, or notion of Social Justice that came into being any time after the First Vatican Council. This perception is based on hatred, fear, and ignorance.

The list goes on - the Perception that African-Americans are innately less intelligent than whites, that Irish are perpetually drunk, that men are more capable in almost every undertaking than women, etc. Fear, hatred, ignorance.

It is, as I posted about ten or twelve days ago, a culture of contempt. It seems to me that the most dangerous is the contempt for reality and the very peculiar and self-deluded notion that my perception IS reality.

"He said, she said" are the most difficult cases because there is no real physical or other type of empirical evidence. If the priest that was caught up in this never had any other allegations against him, then it probably was a false claim. Molesters tend to have multiple if not dozens or hundreds of accusations.

Fr -- With all due respect your Jew and AIDs analogy doesnt fly.

While I understand your point about "perception" the reality is that there really is a systemic problem with homosex and and abuse in the Church. Jews as purveyors of ills and the AIDS infection risk were not.

By having pretended that the non-crisis was a "crisis"...a problem of monumental scope within the clergy...they played into the hands of those who are determined to persecute Holy Mother Church.

They insisted that SNAP, and additional Church-persecuting "victims' groups" were legitimate, honest, rational folks who had every right to attack the Holy Mother Church.

Now, without question, the truth has been revealed in regard to said groups.

They are dancing in the streets in regard to Cardinal Pell's conviction...and they won't rest until they achieve their goal that has existed from the time that they called for Pope Benedict XVI's arrest on "crimes against humanity" charges.

They wish to throw a Pope in prison.

How a person may perceive an issue is not necessarily the reality of that issue.

new - More to the point, the perception that AIDS was a highly communicable disease - that one could contract it simply by being in the same room with an infected person - was a false perception. Yet many people shunned those infected, regardless of their sexual orientation or the way in which the person became infected.

Hatred, fear, and ignorance - ignorance of the mode of transmission in this case was somewhat understandable - were the basis for this inaccurate perception of AIDs and the people who had it.

You are part of Holy Church's destruction, given your heretical views on the Papal Office. Thanks for doing YOUR bit

Ignorance which is rampant in the Global Warming Religion would consign millions to poverty if its tenets are enacted into law. Also, the human race would become extinct if one follows the Dem's new darling, AOC's views, that we should not procreate. LOL, she's YOURS!