THIS DOESN'T HELP MY ALLIGATOR OBSESSION 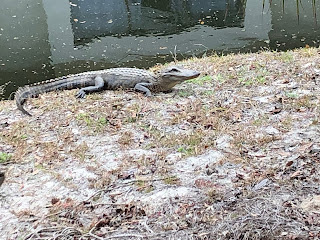 Joe Elam returned in 2010 to the lagoon where an alligator bit him behind his Bluffton home. “The alligator bit the nicest guy in Rose Hill Plantation,” a neighbor said in 1999.

Joe Elam survived an alligator attack outside his Bluffton home when he was a mere 69.
Twenty years later, on last Saturday afternoon, he slipped peacefully from this world following a bout with an enemy he couldn’t escape, pancreatic cancer.

The alligator story went as viral as things could go in June of 1999.

Elam was replenishing a bird feeder in the backyard of his home in Rose Hill Plantation when he heard a loud splash from the lagoon behind him.

He turned to see an 8-foot alligator lunging for him. What followed sounds like everyone’s recurring nightmare. He slipped and fell, and when he hollered no one could hear him.

The gator latched onto his right leg as he repeatedly hit it on the nose and in the eyes with fists that would later swell to double their size.

“The adrenaline took over,” he said at the time.

Finally, something worked, and the alligator let go. He got to the house and told his wife, Ginnie, to bring a towel and call 911.

Injuries included a 6-inch laceration on his right calf, puncture wounds on his leg and bruised muscles. He also broke a collarbone and toe when he fell.

He spent three days in the hospital and did months of physical therapy. He told the doctor he was scheduled to take a trip to Russia in three weeks, and he made it.

Elam eventually got a settlement of some $50,000 from the Rose Hill property owners’ association, along with an apology, because he had repeatedly asked the association as well as a state agency to remove the gator. It had lost its fear of people because it had been fed.

But this gator attacked a strong and sturdy man. As a retiree, he walked an hour a day and several times tackled rugged chunks of the Appalachian Trail.

Yet, Elam’s neighbors didn’t know him as an action figure.

“The alligator bit the nicest guy in Rose Hill Plantation,” one said after the attack.

And he gave a lot more to the Lowcountry than a viral news story.

He was a Mason and past worshipful master of the Unanimity Lodge No. 418 on Hilton Head Island. For 10 years, he was a Shriner clown entertaining at parades and in hospital rooms.

He was a Volunteer of the Year with the Hilton Head Island Concours d’Elegance and Motoring Festival. For 14 years, he organized public parking for the event.

He was an elder and usher at First Presbyterian Church on Hilton Head.

He was the church’s liaison to Boy Scouts Troop 245, which meets at the church. He participated in its many Eagle Scout ceremonies. Elam was a Boy Scouts district commissioner and led troops for decades.

He was into garden railroading, setting up model train villages in his garden in Rose Hill. He did it at Christmas at the senior living complex he and Ginnie moved to last April in Dalton, Mass., to be closer to their three children.

Elam was an engineer, always full of solutions.

He often shared solutions in letters to the editor about better striping on U.S. 278, jug-handled intersections, or the solution to offshore drilling: Close all nonessential businesses one day a week.

And there was this 20-word letter to the editor when people complained about a new cinderblock wall rising along U.S. 278 for a Walmart in Bluffton: “Paint the wall to look like the woods it replaced. Let the students from SCAD have a shot at it.”

He caught Ginnie’s eye when she was singing in a church choir in Cleveland, Ohio. He winked at her. After she saw the first wink, he gave her a second wink with his other eye. He said she couldn’t stop looking back after that. They were married for more than 65 years.

“It’s a terrible loss for me,” Ginnie said Monday. “I met him when I was barely 17.”
She said Joe’s solution to life was devotion to family, church and God.

And perhaps that strong right punch to the eye for a Lowcountry gator that attacked the wrong guy.
Posted by Fr. Allan J. McDonald at Tuesday, March 26, 2019