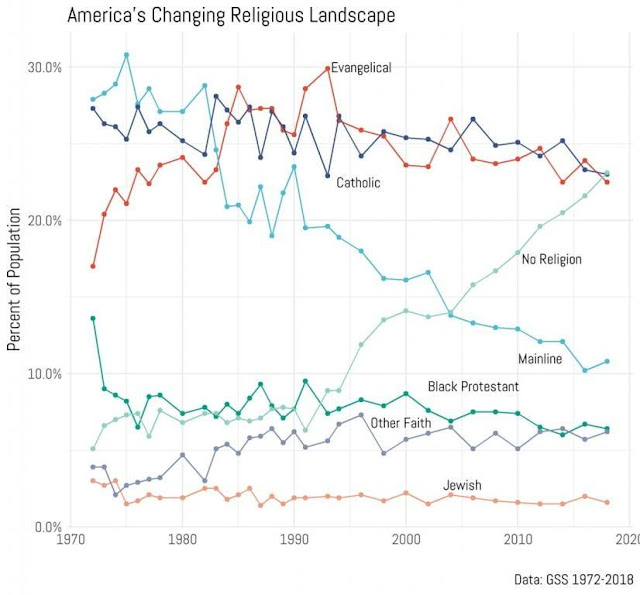 BY HEMANT MEHTA
MARCH 22, 2019
According to just released 2018 data from the General Social Survey, “Nones” are now the largest single “religious” demographic in the country (23.1%), statistically tied with Catholics (23.0%) and just above evangelical Christians (22.5%).
Posted by Fr. Allan J. McDonald at Saturday, March 23, 2019

The, "Well, nevermind," line was not spoken by the Gilda Radner character Roseanne Rosannadanna, but by Emily Letilla.

Roseanne had several common lines such as references to Mr. Richard Feder of Fort Lee, New Jersey, and "What are you trying to do, make me sick?" Her closing comment was ""Well, Jane, it just goes to show you, it's always something — if it ain't one thing, it's another."

Oh, and Roseanne had a religious aunt, "Hosanna Roseannadanna."

Thanks for clarifying my faulty memory of a show I watched religiously in the mid to late 1970's. I had forgotten that "never mind" came from the same actress but a different character, Emily Letilla!

And herein lies the problem with recalled memories! They are often wrong or events and characters conflated!!!!! In fact I had forgotten about Emily and yes she was as funny as Roseanne but not as remembered! Forgot too, about Hosanna Roseannadanna too!

Let's say I get abused 45 years ago by a priest and today I want to tell my bishop. But didn't my rectory have a variety of priests living there and assigned to the parish and each wearing the identical uniform, either a cassock or clerical attire? Some priests stayed a short time and others longer.

Is it possible I could conflate the abuse with the wrong character? Absolutely, especially if my memory is not from Graduate School as in the article I post, but from high school or middle school or worse yet, elementary school.

Everyone knows that memories can be faulty.

Our systems of prosecution, civil and ecclesial, work on the best available evidence. That's why we say "Beyond a reasonable doubt."

If we begin to say that ALL testimony that comes from a person's memory, whether from two days ago or twenty-two years ago, is unreliable, then we have no system of justice at all.

Documents can be forged. Photographs can be photoshopped. Images can be superimposed or deleted from pictures.

And it is utterly unreasonable to confuse or conflate Emily Letilla and Roseanne Rosannadanna. You should not have been staying up that late in any case...

Father, I completely understand your point at 9:51, but am wondering what it has to do with “Nones” (although it may have something to do with certain “Nuns”!).