THE GERMAN CHURCH IS DISINTEGRATING BEFORE OUR VERY EYES! THANK YOU SPIRIT OF VATICAN II AS WELL AS MARX, KASPER, KUNG AND BERGOGLIO, AKA, POPE FRANCIS


"Many believers are very disturbed about the glaring spread of confusion in Germany and worldwide.” 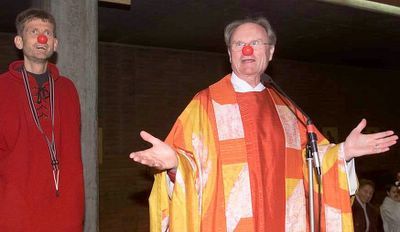 The liberal 1960’s and 70’s destroyed Mass attendance,  Catholic identity as it concerns, faith, morals, asceticism and spirituality not to mention devotions and reverence.

This in turn destroyed vocations to the priesthood and religious life as religious orders once strong disintegrated almost over night and are currently on life support with DNR directives.

This is the case in Uber liberal Germany as Crux reports this morning:


Faithful Catholics to Card Marx: “We reject the instrumentalization of our religion. You use this in a falsifying secularization for the spread of mainstream left-liberal political ideology.”


His agenda is certainly more sociological than theological,” said Father Frank Unterhalt, spokesman for the Paderborn-based priest association Communio Veritatis, which recently made a public demand for Marx’s resignation. “He speaks and behaves often like a left-liberal politician and not like a shepherd of the holy church of God. Whoever sets the cross aside and wishes to serve the dictatorship of relativism should accept the consequences.”

Although many different opinions abound, there is one thing that all parties involved seem to agree on - Germany’s Catholic Church, scattered and divided, is beginning to fall apart at the seams.

“Many believers are very disturbed about the glaring spread of confusion in Germany and worldwide,” said Unterhalt.

Ahhhhhh yes, is it not absolutely amazing that a pope does and says nothing about this? It is almost as though a pope asked and encouraged the Church in Germany to 'make a mess.'

Is that a photo of Anonymous celebrating “Mass?”

I am heartbroken and dejected at this point. We are adrift and our leaders continue to whistle past the graveyard.

Dan: I wonder if you capture the essence more completely than you may realize. At this point, in order to somehow contextualize what we are seeing in and out of our church, I have to believe the course we are on is DELIBERATE. If that is true, then why? Why would HFPF set this course and then continue to enable it? For the love of God, why?????

Father, I know you’ve said here that you have serious objections to Michael Voris, but I urge you to read the following posted today:
https://www.churchmilitant.com/video/episode/vortex-the-1970s-never-went-away

It's appropriate to be heartbroken and dejected right now. That shows you love Our Lord and the Church. So where are we? We're sorta in the same frame of mind as the apostles on Holy Saturday. Jesus was killed and put in a tomb. To them, the destruction of everything they lived and hoped for came to pass. Their stability and Faith is shattered. They are sorrowful and hopeless. I bet they thought, 'now what?'

For us, it's Lent, and a great time to see life through their eyes on Holy Saturday, and compare that to current events. But what happened after another day? Jesus was seen. Alive. They sort of believed it, and sort of not. They were hiding for fear of persecution and crucifixion for themselves. They were crushed. The suddenly Jesus was with them. He said, "Peace be with you."

This stuff happening now is real and there is no doubt they are destroying our Church. We have no power to stop them, and they keep coming in with their psychological bulldozers to level anything that even remotely looks like true Faith.

What can we do? Our job is to be like Mary, John, and the few women at the foot of the cross. Our job is to not lose our Faith in the face of utter destruction. Our hope is in the Lord. Our job is to pray, and trust in God, and live the pain of our hearts with calmness and hope, and wait on the Lord.

Fight for your faith in your own heart. Fortify yourself interiorly with prayer and hope. Get stronger in yourself, refusing to be afraid, refusing to doubt Our Lord and the doctrines of the Catholic Church, regardless of what divergence is being preached by some clerics. Keep your Faith. It's your precious gift given to you by God. Don't let them have it. Fight for it in your own heart.

And remember, just like the first apostles, Jesus is going to need the likes of us when He rebuilds His Church.

That was absolutely beautiful. Far more insightful and useful than what comes out of the vast majority of the pulpits in Chicago today.

This photo is disturbing, creepy and, to me, emblematic of the era and the liberties many who served at that time took regarding liturgy and morality. Certainly not the Church Militant and/or Triumphant.