WHAT WILL HAPPEN TO PONTIFICAL MASSES? WILL THE NEW PAPAL MASTER OF CEREMONIES BE SOMEONE TRAINED BY BISHOP GUIDO MARINI?

With Pope Benedict’s papacy being erased/canceled as it concerns liturgy and continuity, just who will replace Bishop-Elect Guido Marini? What changes will there be in papal liturgies? Will the Benedictine altar arrangement disappear?

And yikes, Bishop Elect Marino certainly has aged, but in his case, he doesn’t look well…is it stress over the canceling of Pope Benedict’s liturgical vision? 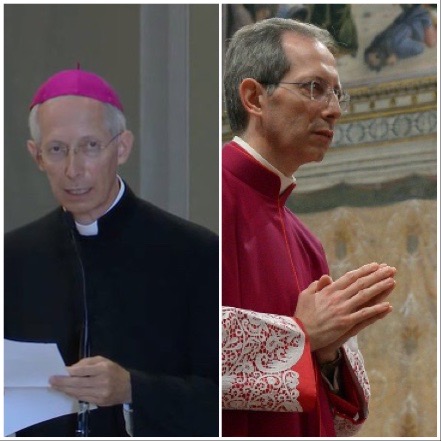 In an unusual Sunday announcement, Pope elevates (and moves) Msgr Guido Marini, 56 – his lead Master of Ceremonies inherited from B16 – to bishop of Tortona, at the peripheries of +Guido’s native Genoa; no successor named as Pontifical MC.

Pope Francis has named Monsignor Guido Marini as the new Bishop of Tortona in northern Italy.

Pope Francis has appointed Monsignor Guido Marini, of the clergy of the Archdiocese of Genoa, as Bishop of the Diocese of Tortona, Italy. Monsignor Marini has been serving as Master of Papal Liturgical Celebrations.

He became Master of Papal Liturgical Celebrations in 2007 and was confirmed in the post by Pope Francis in 2013. Since 2019 he has also been in charge of the Pontifical Musical Chapel.

For the academic year 2018-2019, he was Invited Lecturer in Papal Liturgy at the Pontifical Athenaeum Sant'Anselmo. Since his ordination to the priesthood, he has also carried out his ministry in the context of preaching spiritual exercises, spiritual direction, accompanying various youth groups, and as a spiritual assistant to various religious communities.

well the people of Tortona caught a break

I'm not surprised he looks gaunt and tired, after nearly a decade of intrigue against him within the Vatican and the Italian church (remember the Bari bishops' conference demanding his replacement back in 2013?).

Tortona isn't exactly a great reward for his labors: it's a complicated diocese straddling three different civic provinces, and it's chronically short of priests. His predecessor was very popular there, so he'll find it pretty tough-going, at least initially.

Was the predecessor fairly traditional? If so, that might help

@TJM
Yes, I don't think that Mons. Marini will find it hard to fit in liturgically, and his predecessor had good taste in vestments.

The sanctuary in the cathedral was remodelled fairly recently, but I quite like the new fittings: there's a "before" picture on beweb:
https://www.beweb.chiesacattolica.it/cathedrals/cathedral/356/Chiesa+di+Santa+Maria+Assunta+e+San+Lorenzo

PF left Guido Marini in post but replaced the other personnel in his office. The standard of liturgy and music in St Peter's has declined markedly in recent years, after a welcome improvement under B XVI, which saw inter alia Mass IX used at Christmastide and Mass I at Eastertide, the occasional use of the Gradual in place of the Responsorial Psalm, more Latin and much better vestments.

Now we're back with the hackneyed 'Missa de Angelis' week in, week out, an interminable vernacular entrance hymn and a horrible operatic style Italian RP. Francis himself mumbles what amounts to a low Mass, usually in Italian, and has his own take on the rubrics. He looks bloody miserable and unlike any other bishop I've seen, does not bless left and right when processing in and out.

It's hardly surprising that the cameras dwell on the attractive females in the congregation, although it draws attention to the fact that they, like the rest of the gathering, are not singing anything.

I suspect that Guido is only too pleased to be out of it.

And what came of PF's pledge to continue the liturgical work of his predecessor? He's now doing his best to undo it.

I don't know. Although papal encyclicals etc. are not always written by the pope himself, every official pronouncement by PF appears to have been ghost-written (and I don't mean the Holy Ghost). SP and its accompanying letter had Benedict's fingerprints all over it, so can be assumed to be motu proprio; he had had a lot to say about the liturgy before his election.

In contrast, what PF has said regarding the liturgy is both minimal and contradictory. His 2017 statement that the liturgical so-called reform was 'irreversible' was made to a conference of progressive Italian 'liturgists' and perusal of the whole statement suggests that it was written by, rather than for, its audience.

Understanding the Vatican is rather like understanding the Kremlin during the Cold War; it needs expert analysis, relies heavily on contacts and 'leaks', and even so remains in a large measure speculative. Some observers have suggested that TC was written some time ago and reflects the agenda of a majority of Italian bishops.

Don't get me wrong - I hold that this papacy is thoroughly dysfunctional and pray daily for its speedy conclusion.