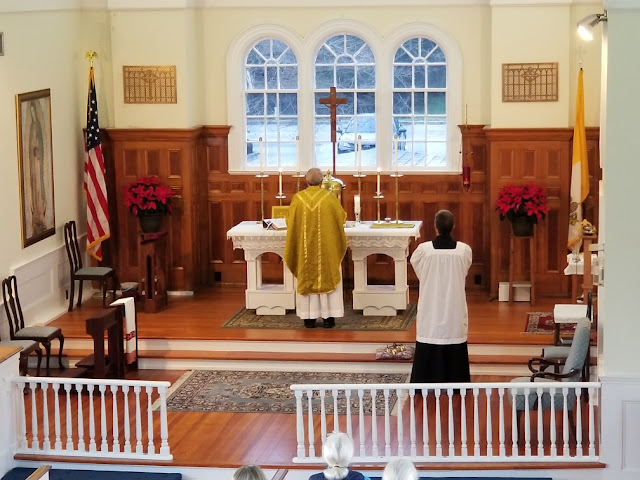 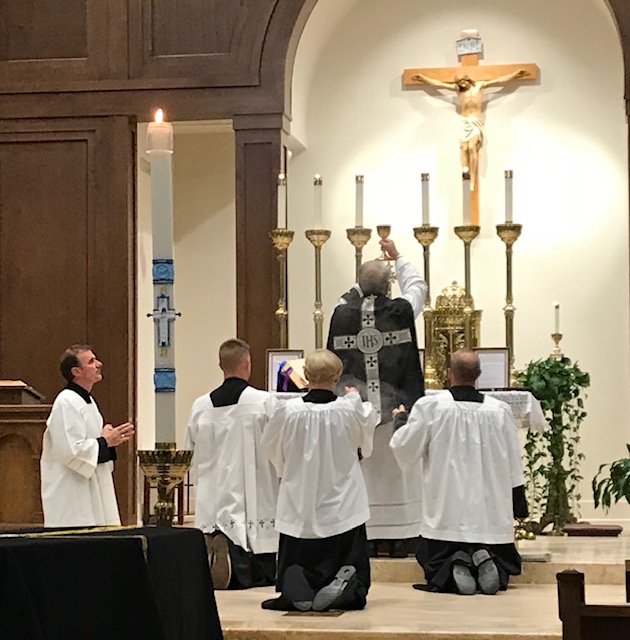 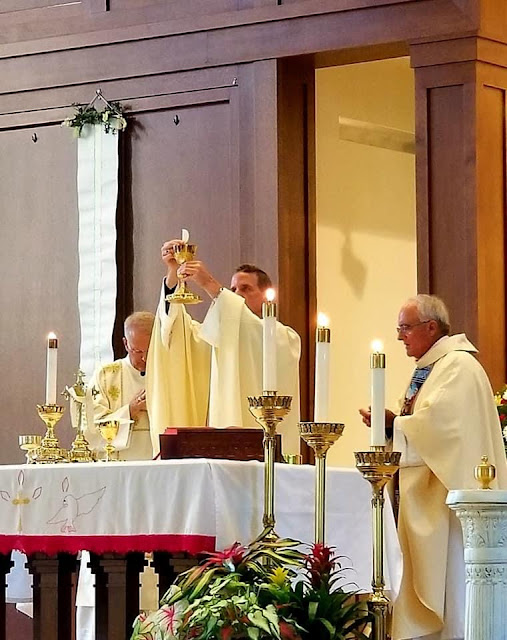 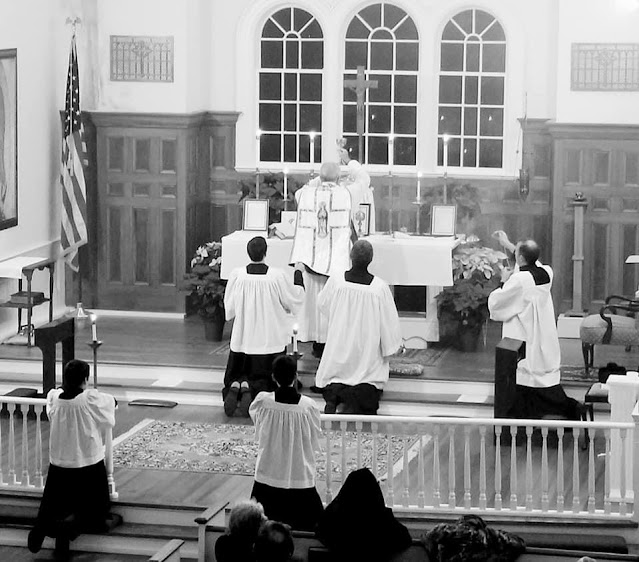 No matter which way the priest faces the altar, Mass is prayer to God led by the High Priest who is Jesus Christ sacramentally made present in the ordained priest.

Ask any priest who celebrates both forms of the one Latin Rite, and he will tell you that it has improved his fidelity to the newer missal and makes him more conscious to show forth the prayerful aspect of the Mass in its orations whether he faces the congregation or not.

As everyone knows, I am in favor of ad orientem for the Liturgy of the Eucharist, but that position needs approbation from the bishop or else people are literally yanked around depending on the priest or the bishop.

For example, in my previous parish for at least three years if not more, one of our five weekend Masses was celebrated ad orientem. It was like all the other Masses except the Liturgy of the Eucharist was ad orientem. At that same normal Sunday Mass, once a month the EF Mass was offered. I really think that the majority in attendance thought the only difference was that the Mass was in Latin.

After I departed, that Mass returned to being like all the other ones, facing the people for its entirety.

Ad orientem for the 1970 Roman Missal must be explained and explained well, especially to my generation of Catholics who think that ad orientem excludes them and makes them feel as though the priest has turned his back on them. But isn’t that the problem, that my generation of Catholics think that when the priest faces them, they are being spoken to as though the orations of the Mass are like the homily, directed to them. Of course that is wrong thinking, isn’t it?

Whether or not EF Masses which have been in place for several years or months can continue is one question. But the second question is answered, no new ones will be allowed and most bishops are not giving permission to newly ordained priests to celebrate the 1962 Missal any longer.

THUS IT IS INCUMBENT ON BISHOPS TO MAKE SURE THAT THE LATEST INCARNATION OF THE 1970 ROMAN MISSAL BE CELEBRATED IN THE MOST FAITHFUL WAY POSSIBLE AND THE MOST PRAYERFUL WAY POSSIBLE.

HOW MANY BISHOPS WILL ENCOURAGE AD ORIENTEM FOR THE LITURGY OF THE EUCHARIST AND KNEELING FOR HOLY COMMUNION? THAT IS THE KEY TO AUTHENTIC RENEWAL OF THE LATEST INCARNATION OF THE 1970 ROMAN MISSAL

AND IF THE BISHOP DOES NOT FEEL IT PRUDENT TO AUTHORIZE AD ORIENTEM FOR THE ORATIONS OF THE MASS, WILL HE ENCOURAGE THE BENEDICTINE ALTAR ARRANGEMENT SO THAT THE PRIEST FACES THE CRUCIFIX AT THE ALTAR WHICH THEN BECOMES THE SYMBOLIC EAST—FACING JERUSALEM, GOLGOTHA, WHERE CHRIST SACRIFICED HIS LIFE FOR US ON THE CROSS, WHERE HE WAS BURIED, WHERE HE ROSE, WHERE HE ASCENDED, WHERE HE SENT THE HOLY SPIRIT AT PENTECOST AND WHERE HE WILL RETURN AT THE CONSUMMATION OF THE WORLD.

Father, you are trying to "have your cake and eat it"; as the old adage went.Pope Francis has clearly in word and action, denied any "Reform of the Reform".He does not want any cross fertilization between the TLM and the N.O.

Clearly, he embraces the hermeneutics of rupture, and sees the Post Concilliar Church, as did Paul VI (hence his canonization) as a new church,free of history.

'No new ones [EF Masses] will be allowed'. This is a sweeping statement. Have all the US bishops issued decrees to this effect? If not, then the statement is clearly false.

'Most bishops are not giving permission to newly ordained priests to celebrate the 1962 Missal any longer.' Again, where is your evidence for this assertion? Which priests have asked for it, and which bishops have refused? We need to know.

One of the problems with TC (and there are many others for canonists to pick over) is that it gives responsibility to bishops and then effectively tries to constrain their actions by centralized diktat. You cannot have it both ways.

Many bishops are interpreting these constrictions as 'guidelines' which are therefore not legally binding. We'll simply have to tough it out - this dysfunctional papacy is on its last legs anyway.

I must demure from your contention that a priest needs the approbation of the bishop to offer Mass ad orientem. To be clear, the Missal, at the very least, mandates neither orientation; and indeed, I think the Missal presupposes ad orientem will be the posture in at least some circumstances, and potentially, any. Absolutely nothing in the 1970 Missal tells a priest to face the people throughout Mass; nothing at all; it is a custom but it is in no way mandatory. And, the Missal gives specific instructions to the priest to turn toward the people at various moments; which would make no sense if the default posture was always toward the people throughout.

So, I reiterate, no permission is needed.

Yes, I get that your main point is that approbation from the bishop, while not necessary, is advisable, so that the people don't, as you say, get jerked around with coming and going of priests. However, I fail to see how the bishop's "approbation" will prevent that.

Suppose the bishop explicitly says to a pastor, "yes, I am in favor of you offering the 5 pm Saturday Mass ad orientem." Great! Except whenever a substitute priest comes, will he be obliged to do so? Will the successor to that priest be so obliged? Certainly not; no bishop is going to mandate such a thing, even if he could (which I doubt he could).

I offer Mass ad orientem three times weekly, not counting when I offer the traditional Latin Mass privately. But when another priest takes my place at various times, he does what he prefers in that regard, and how can it be otherwise? After giving catechesis to prepare for ad orientem, we just began doing it, and when there is a shift with a visiting priest, I see no indication that anyone is confused or bothered by this. After all, many people will come to a different Mass from week to week, and they know if they attend 9 am Mass on Sunday, I'm at the high altar, but at the low altar otherwise. People have preferences, but there is zero indication anyone is confused or upset.

You say that those who have celebrated the EF have an "improved" approach to celebrating the NO, so I wonder what was lacking in the formation of a priest whose fidelity to the missal was lacking and who did not underastand the prayerful aspect of the Mass in its orations.

I ask the question seriously.

Father Fox,
At Saint Anne’s our daily Mass which is in our chapel is celebrated ad orientem and people kneel or stand (majority kneel) at the altar railing to receive Holy Communion. I did not ask permission of our previous bishop or the current one to do so. I think, though, if I had asked the previous bishop he would have said no. As well when I as in my previous parish, as I wrote, one of our five weekend OF Masses was ad orientem. I did not ask our previous bishop for permission. But at a clergy conference, where I was absent, he told the priests that he preferred we not celebrate the OF Mass ad orientem.

I do not know how our new bishop feels about ad orientem. We he visiting our parish for the first time and I showed him our chapel, he asked about the fixed altar. I said we celebrate Mass here ad orientem. He did not say anything else. But I think he was amused.

However, the pastor of my former parish in Macon, where I restored the altar railing, now uses the altar railing for the distribution of Holy Communioin at all Masses. I believe he sought permission from our new bishop who said, that he did not mind as long as people could choose to stand to receive at the railing if they wished and anyone could receive in the hand if they chose to do so. In fact he was there for a Sunday Mass and distributed Holy Communion at the railing.

Thus, if a bishop can proscribe intinction, which is very clearly in the GIRM of the American Roman Missal, he could also not allow ad orientem and he could tell us to not use the Confieteor or only use the Apostles’ Creed at Mass or whatever other option he prefers over others.

That’s fickle nature of our modern Roman Missal and bishops who are the chief liturgists of their dioceses.

I doubt you'll ever find your way to Russia, Ohio, but if you do, you'll be very welcome, and I'll be glad to pour you a drink and we can discuss this candidly.

I ask the question seriously