OH MY, AND THIS IS WHAT VATICAN II INTENDED IN THE MINDS OF SO MANY CLERGY AND LAITY AND I THINK THEY ARE RIGHT 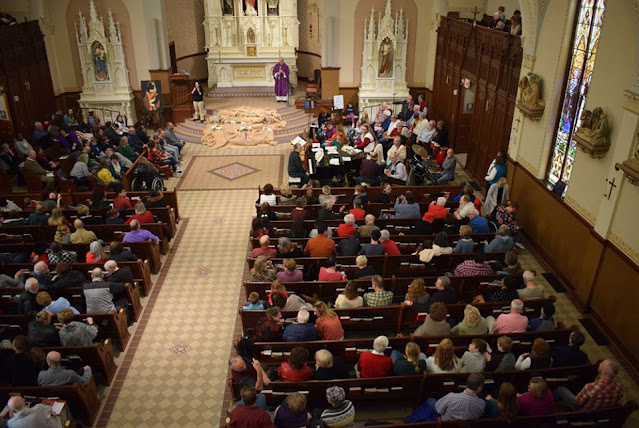 Those who want to suppress the Traditional Latin Mass in favor of the post Vatican II Mass point out that the Vatican II Mass incorporates the new theology of post Vatican II ecclesiology where the laity are completely involved in the active and conscious participation in the Mass, where the horizontal relationship with each other is paramount and stifled reverence, passive participation and sacred silence are regarded as things of the past to be banned.

For now, please view this Mass, what those who want to ban the EF Mass see as the future.

Before the Mass begins, there is simply audio. It sounds like any secular pre-meeting gathering, doesn’t it.

These people, though, are believers, but their Catholicism has suffered syncretism with Protestant evangelicalism. It is kind of charismatic but not.  It is a hodgepodge of confused theologies both Protestant and Catholic. It is a different denomination, neo-Catholic/Protestant.

But then watch and listen…oh my!

This is atrocious. This is a major problem crying for a solution. The is abuse and nonsensical. Had I been present I would have walked out and immediately gone home to take a shower.

It is interesting that the church building has not been completely wreckovated. At first I thought the Liturgy of the Eucharist would be ad orientem as it appeared there is no free standing altar, but in fact the altar is detached from the reredos allowing the Mass to be celebrated facing the congregation. I like that solution.

Even the celebrant is a bit of a showman which is what the Ordinary Form of the Mass leads too and as Fr. Fox, Martin, not Matthew, has said, even liberals or progressives are not pleased with the 1970 missal because they are always trying to improve it with antics or whatever.

It's all so yesterday.

The point I would maker is that to remain Catholic in continuity with Tradition modern theology must not be accepted in toto because it is in conflict with 2000 years of tradition.

This is the fork in the road. With modernism left you go firmly committed to a human centered religion. Right you stay in continuity with Tradition as Benedict XVI taught. There is no finessing the modernists theology. It is simply not Catholic. They will call it that but that is just gaslighting.

There is a schism in the Church today from the Church before Vatican 2 because the theology prior to the council and the theology of today as officially promoted cannot be reconciled. The wrekovations of sanctuaries and the Mass occurring in tandem after the council is the clearest evidence of the ferocity of the rebellion unleashed on 2000 years of Catholic history and spirituality. It is as if a Catholic Taliban found the sacred signs of the faith and smashed them to smithereens.

The solution will come after the still faithful segments of the Church reassemble. It has become a movement already. No matter what obstacles are lined up against this movement it will prevail.

Remember the words of Gamaliel spoken to the Sanhedrin

"So in the present case I advise you: Leave these men alone. Let them go! For if their purpose or endeavor is of human origin, it will fail. But if it is from God, you will not be able to stop them. You may even find yourselves fighting against God.” At this, they yielded to Gamaliel. They called the apostles in and had them flogged. Then they ordered them not to speak in the name of Jesus, and released them.…"

The present Holy Father should have read this passage before abrogating the TLM.

Pity the next pastor who has to follow the current one. It will tear the parish apart and perhaps kill the new pastor. This is called a Vatican II moment.

Ouch! Sadly, this is typical; many Catholics would look at this and wonder what the big deal is.

I've not heard this sort of folk or worship/praise type music at mass since the 1970s. Seems totally out of place in any Roman Catholic Church, this very traditional church and sanctuary among them. Agree greatly with the following: "It is a different denomination, neo-Catholic/Protestant."

Compare the demographic to that of the Mater Ecclesiae Feast of the Assumption mass at Philadelphia's cathedral, mostly over 55 here, mostly under 50 there. Which one do you think will still be around in 20 years?

I watched about half the video, here are my observations:

- I wonder if the priest is accustomed to communicating with deaf folks; if so, that may explain his super-expressiveness. My impression (from admittedly limited experience) is that being extremely expressive in facial gestures is baked into sign language and/or lip-reading approaches. If so, I can understand how that could become something automatic.

- The readers did a good job from what I could see.

- The homily itself was pretty good.

- My recollection of the rubrics for homilies is that they are presumed to come from the pulpit or the chair; however, so many rubrics for the 1970 Missal are constantly qualified with "ifs" and "buts" and "as circumstances dictate" and "for pastoral reasons," that I strongly suspect lots of priests (and bishops) approach a huge swathe of the rubrics as advisory. At least, that's how they operate, and I can believe they are acting in good faith. Still, not a fan of giving the homily away from either of these locations, as a rule, because in my experience, it usually (not always) produces more of a "showman" approach. Even worse is when the homilist starts roaming around. With rare exceptions, it's not practical.

- I admire the fervor evident in the music, but it's simply not suitable for the Roman liturgy. If you wonder why some people refer to the post-Vatican II Mass as a "different religion," this is what prompts that.

- The choir should be relocated; but I can only imagine the crisis that would provoke. This video portrays a choir and cantors with a performance mindset, which is corrosive and distracting, but easy to have develop in any circumstance, and especially in this arrangement.

- There is absolutely no provision for the alleluia to be resumed after the Gospel, although I have seen that happen before. I suspect it was one of those suggestions that certain organizations devoted to re-imagining the liturgy would churn out.

- Notably, other aspects were done reasonably well. The church itself is lovely. There is a lot of extra junk in the sanctuary; having a bottle of sanitizer sitting on the altar looks terrible; surely someone could put that out of sight?

The guy in the choir with the black shirt, reminds me of a "Moma's and Papa's" cover band I was saw at a state a fair circa 1983. Ill say he definitely had some kind of spirit. In my lack of charity, I wonder if there was even anyone deaf there, the interpreter seemed to have something wrong with her. The Church is beautiful though.