THANK YOU DR. MASSISMO! YOU MAKE IT CLEAR! THE CATHOLIC CHURCH IS IN SCHISM WITH HERSELF! 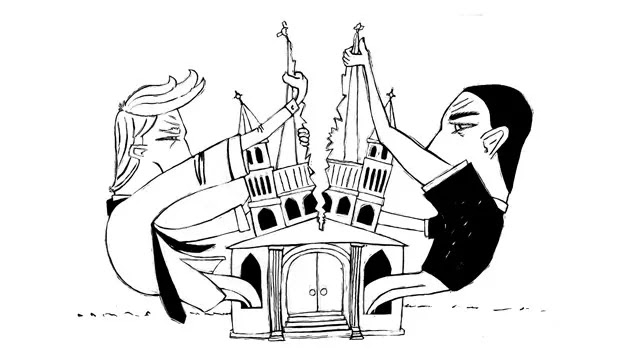 I like the Church as she was before Vatican II, warts and all!

I like the Catholic Church of Pope St. Paul VI and her new and improved status!

I like the Church of Pope St. John Paul II and the excitement His Holiness brought to the Church, her young and the restoration of the great discipline of the Church.!

I like Pope Benedict’s hermeneutic of continuity and restoration of all the good things tossed after Vatican II!

I like the pre-Vatican II Mass and liturgical books!

I like the post-Vatican II Mass and liturgical books!

I like conservative Catholicism in the post-Vatican II age!

I like progressive Catholicism espoused by Pope Francis the most humble pope in the history of the Church who always dialogues with those he sends to the periphery answering all their questions and concerns!

I like the German Church and how it is seeking the success of the Episcopal Church by imitating its liberal agenda.

I like, I like, I like! CAN ANYONE SPELL SCHISM? AND MAKE NO MISTAKE, THERE ARE MORE PROBLEMS OF POLARIZATION CREATED BY THE MOST HUMBLE POPE IN HISTORY SINCE HIS HOLINESS ASSUMED THE PAPACY THAT FAITHFUL 3/03/13 EVENING IN ROME AND GOOD EVENING. IT WAS IN MY BONES WHEN I LOOKED INTO HIS EYES WHEN HE WALKED OUT ONTO THE LOGGIA, SOMETHING IS NOT GOOD HERE...

DOUTHAT’S CRITICISM OF POPE’S RESTRICTION OF LATIN MASS IS FASCINATING; IT’S ALSO AHISTORICAL AND HAS BEEN USED BEFORE

“In the divisions of the church, the pressure toward traditionalist and progressive extremes, both Latin Massgoers and German Protestantizers recognize the fact of Catholic decline. Both believe the other’s vision would break the church in order to save it. Both have weaknesses and very different sorts of strength. The outcome of their struggle is—as good Catholics know—somehow foreordained.”

Douthat may be right about the clashing narratives regarding the fact of AmericanCatholic decline. That Catholic world is in serious decline, despite the pathetic efforts of the restorationists to pretend we’re still in the 1950s, and despite the wishful thinking of old-guard American Catholic liberals who haven’t yet figured out why their children and students don’t share their concern for the church.

READ THE REST THERE!


You're trying to tell me that the status of the Catholic Church IMPROVED under Pope Paul?

Just WHAT discipline was restored under John Paul II?

Could we have some REALITY here? This is about as bogus as the old "new springtime" claim.

To me, "I like", "I don't care for" are normal human reactions. Like you said, the "I likes" have been split into camps in a way that doesn't represent unity and fidelity. It's unhealthy and it shows. In the East, we just don't do this. There are things that I'm really drawn to, but, the things that don't resonate quite to the same extent, I still respect and participate in fully and actively. Balkanization is just unheard of for us and it's a shame that deterioration has forced it to exist on the Roman side. I'm talking about those who really live in an unhealthy world of descent and vitriol not, for example, the Fr. AJM/MJK dynamic. You both have different styles and neither of you are wrong and neither is more right than the other. Differing views on interpretative matters doesn't fall into this category either. It's a healthy discussion/debate and at the end of the day, we're virtual "friends" unified within the Church. I think people sometimes forget that relative to the current GIRM/norms and established doctrine.