IS ECUMENISM A HERESY? 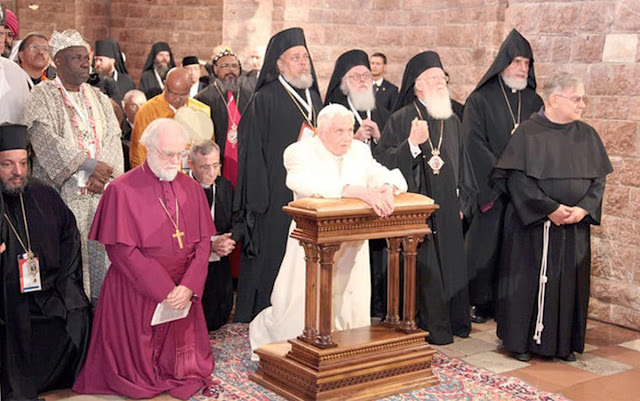 Of course not, and I love the answer that is given in this article and press title for full article:

Here are some good sound-bytes:

Is Ecumenism a Heresy?

Vying with the Declaration on Religious Liberty for the honor (or disgrace, depending on one’s theological outlook) of being the Second Vatican Council’s most doctrinally innovative document is its Decree on Ecumenism, Unitatis Redintegratio (UR). Those at both traditionalist and liberal ends of the Catholic spectrum have seen this Decree (with sentiments of glowering gloom and gloating glee respectively) as representing a significant departure from traditional doctrine. The latter, of course, emphasized Catholicism as the one true religion, to which separated Christians will simply have to return if ever unity is to be restored. In this short article I shall limit myself to a comparison between UR and the pre-conciliar papal document most frequently cited as being incompatible with it, Pope Pius XI’s 1928 encyclical on fostering true religious unity, Mortalium Animos (On Religious Unity). This encyclical set out the Catholic Church’s position regarding the fledgling movement for religious unity which had been gathering steam in liberal Protestant circles since the late 19th and early 20th centuries.

To compare these two magisterial documents, we first need to recall the distinction between a reversal of official Church policy, discipline or pastoral strategy, and a contradiction of doctrine. The former type of change has often taken place in the course of Church history, in response to changing circumstances. And in this practical, disciplinary respect, a comparison between MA and UR reveals an undeniable and very marked change of direction—indeed, practically a U-turn. Pius XI flatly forbade any Catholic participation in interchurch or inter-religious meetings and activities motivated by the desire for restoring Christian unity. Vatican II, on the other hand, authorizes and positively encourages Catholic participation in such activities (within certain limits). The modern Church has thus made a prudential judgment that the risks and dangers of indifferentism and confusion about the faith occasioned by such activities—perils strongly emphasized by Pius XI—are outweighed by the great good to be hoped for as the long-term result of ecumenism: gradual, better mutual understanding, leading to that unity which Christ willed for all who profess to be his disciples.

At the more fundamental level of doctrine, however, the short answer to the charge of contradiction between MA and UR is that what Pius XI condemned is by no means the same thing that Vatican II affirms. What, exactly, did Pope Pius condemn as false doctrine? Basically, the liberal Protestant theology that dominated ecumenical initiatives in the early 20th century. More specifically, this theology embodied—explicitly or at least implicitly—several specific theses censured by Pius XI.

I lack the theological training to comment on the heresy issue, but as a practical matter it seems a waste of energy when your Church is shedding members by the millions

TJM: Exactly. Both Father Kavanaugh and Father McDonald, normally at odds with each other, could probably unite to use their seminary training to rip me apart on this, so it's better to just cut to the chase: How's that ecumenism workin' for ya?

Seriously, this is lamer than a pathetic joke. We can't even keep our own members and we're talking about THIS? Bugnini the stonecutter himself claimed the objective of forcing upon us a Mass "less offensive" to Protestants and look at the result: A Catholic free-fall that won't quit and a purported pope who wants to cut the wound even deeper.

My God in Heaven have mercy on us! Does anyone in charge have an ounce of common sense and a grasp of reality?

I don’t believe the average Catholic knows what it means to be Catholic at its core well enough to benefit from it. That stems from the Church leadership who have rationalised away so much of our identity and tradition that a Catholic is not only self identified, but self defined.

Ecumenism itself is not a heresy. Indifferentism and syncretism undoubtedly are. I know Anglicans who are more 'Catholic' in their beliefs than (sadly) a lot of nominal Catholics these days. It's also helpful to emphasize what we as Christians have in common.

But it is important to recognize that the Church of England and the Church of Rome did not 'drift apart' over doctrinal and authority issues which can be resolved over time. The schism was effected by Act of Parliament, and only Parliament can undo it.

Agree with John Nolan @ 5:31 pm (to not simply parrot his thoughts and then, nowhere near as well). Except for dialogue with the Orthodox, my sense is they aren't overly productive and just generate paper to sit on someone's shelf.