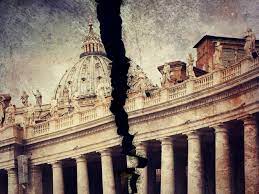 My title above is something good for us to ponder. In Pope Francis’ recent Motu Proprio, His Holiness believes that the traditionalist movement in the Church, fueled by Pope Benedict’s Motu Proprio is causing a schism. And thus, a pope up until now unwilling to crush any movement in the church, unless is is right leaning, has crushed Pope Benedict’s Motu Proprio in the hopes of crushing traditional Catholicism’s premier movement.

But if there is a looming schism in the Church, hasn’t it already occurred? There are now two extremes in the Church, the one Pope Francis wants to ruthlessly crush associated with “right leaning” Catholicism and the other that His Holiness has no real desire to crush, the “left leaning” one centered in Germany but not just there, but throughout the world. This group has a vocal minority and a silent majority.

If Pope Francis allows the German synodal process to conclude on the very road they have chosen to take and there is no Motu Proprio to call them out and demand that bishops take their responsibility as the chief shepherd of their dioceses to do so, then we know which schism has papal approbation and which one doesn’t. But make no mistake, both are schismatic even if the pope tacitly approves of one but not the other.

What are the signs that Pope Francis will act eventually on what he ambiguously states and usually in informal ways?

With the traditionalists, His Holiness has always denigrated them, called them rigid, and that they have serious spiritual and psychological pathologies. He has called them neo-Gnostics and neo-Pelegians, in other words, His Holiness has called them not only schismatic, but heretics. Finally, we get a Motu Proprio that is so clear and authoritarian, unlike anything this Pope has ever issued, that there is no mistake where his words and gestures were leading.

With left leaning Catholics, His Holiness always seems to offer support, sympathy and hospitality. His Amoris Laetitia in a footnote, clearly allows Holy Communion to be received by those in illicit marriages and relationships, not only heterosexual civil or illicit unions, but any type of  illicit, but supportive union. What preceded this, of course, is the pope’s statement that Holy Communion is Medicine for the sinner not a reward for saints.

We know that time and again Pope Francis has made public gestures of friendship, pastoral solicitude and outreach to LGBTQetc members of the Church and society. He is the most gay friendly pope ever and is recognized by the world as such. He has friends who are in gay unions and has invited transsexuals to the Vatican addressing them according to the gender they identify, not that they biologically are.

He has publicly confirmed Father James Martin, the mirror image of Fr. Altman, in Martin’s ministry to the LGBTQetc community.

And he has rehabilitated a bishop from South America accused of sexually harassing seminarians and having gay pornography on his cell phone. This bishop, a close friend of the pope, was brought to the Vatican and given a cushy job and has been invited to the papal Lenten retreat. There seems to be no real concern about the gay activities within the walls of the Vatican.

The pope has reopened the possibility of female deacons and paves the way for this by opening the once priest path only official “orders” or “ministries” of lector and acolyte to both men and women. Female deacons will be the path toward priesthood and bishops.

All of these left leaning theologies are embodied in Germany’s synodal way which Pope Francis has only weakly criticized but one knows where His Holiness’ heart truly lies. This was confirmed in the most brilliant theatrical dramatic production concerning the public resignation of Cardinal Marx of Germany which you can read HERE.

What will this mean for the Church in the short term? Where is Divine Providence in all of this?

Who knows where this is heading, but one possibility is that PF will be considered an anti-pope one day. There is definitely something wrong with this man. Even many of his fellow travelers did not like this recent motu proprio

In light of this post, would it be accurate to surmise that you are now beginning to agree with +Viagno’s assessment concerning Pope Bergolio and his agenda? I am interested in your thoughts concerning + Viagno’s response to the motu proprio?

SS I think Vigano has overplayed his cards and has some mental issues. He’s all over the place too with conspiracy theories all of which compromise the nuggets of truth his rantings contain!

The OF Offertory today (Precatus est Moyses) is translated in the Solesmes Gregorian Missal as follows:

Moses prayed to the Lord his God and said: 'Why, O Lord, is your anger enkindled against your people? Let the wrath your mind has conceived cease. Remember Abraham, Isaac and Jacob, to whom you swore to give a land flowing with milk and honey.' And the Lord was dissuaded from accomplishing the evil which he had threatened to inflict upon his people.

Moses was, of course, dealing with the God of the Old Testament. Had he had to deal with a pig-headed Argentine dictator-pope who doesn't seem to care about his people, his prayer would have gone unanswered.

It's very easy to dismiss Vigano as "mentally unbalanced" or a "conspiracy theorist" or some other such throwaway title, but...well, what if he's right?

This man was greatly trusted by a pope most readers here esteem highly. He was the nuncio to this country for a significant time and has inside information most of us have no access to, but which often seems to corroborate some of the more troubling leaks that have come out of the chanceries. If we knew what this man knew, if we had seen what this man has been privy to, we might be written off as "mental cases" too. Maybe holding it in so long might give one who finally speaks out the appearance of imbalance, but I don't think too many people would argue that the institutional Church is in much of a "balanced" position right now. While I respect your right to disagree with Vigano Father, have you even WATCHED his latest video discussing Francis and the Motu Proprio.

We all KNOW that there are problems in the Vatican and the administration of the Church. Vigano is the ONLY major prelate to break the Omerta and try to shine a light into the filth in the Church. Maybe, just maybe, we ought to follow the beam where he points it instead of calling him nuts. If he IS crazy, then he's crazy like a fox.

You do have a way with words. I loved your parting shot about PF! There is just no reflection on that man’s part.

I am in your camp. Vigano, though not perfect, has been one of the few to drop the company man approach. He is speaking truth to power. Hopefully this papacy will be a bad memory soon. I think PF is destructive and cruel and I have observed every pope since Pius XII. John XXIII would be appalled by PF’s lack of diplomacy

Why all the hatred for ArchBishop Vigano? He’s one of the few Bishops the church has with any courage. The rest are all compromised cowards. Vatican II was the 1789 of the new church there’s no doubt in my mind about that. The Montini mass can’t be saved as it’s an abomination that more Protestant then Catholic. Luther must be so proud of his new church as he sits on his privy in Hell.

Also there are no conspiracy’s and no coincidences.

Unknown I will not publish your comments after this until you activate your account with blogger so I can access it. You will need a handle as well.