It seems the Italian bishops despised Pope Benedict snd eventually got their way. All this was foreseen in 2013 in this eye opening blog post.

From the Eponymous  Flower:

Why Pope Won't Fire Marini: "Put the Treasure of Tradition to Use" 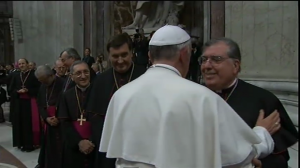 Pope Francis and the Liturgy: Episcopal Indiscretions - Why Guido Marini Was Not Fired

(Rome) Italy's bishops met from the 20th to the 24th of May in their Spring General Assembly. Pope Francis previously received bishops in their ad limina visit. On the 13th of May this was the case for the bishops of Apulia, who then became talkative about what the Pope had said them.