ALTHOUGH I DOUBT THAT CARDINAL SARAH WILL BE ELECTED POPE, BUT WHO KNOWS, HE IS CERTAINLY SETTING THE STAGE FOR THE DEBATE OF THE CARDINALS IN THE CONCLAVE ABOUT WHICH NEW POPE THEY ARE TO ELECT 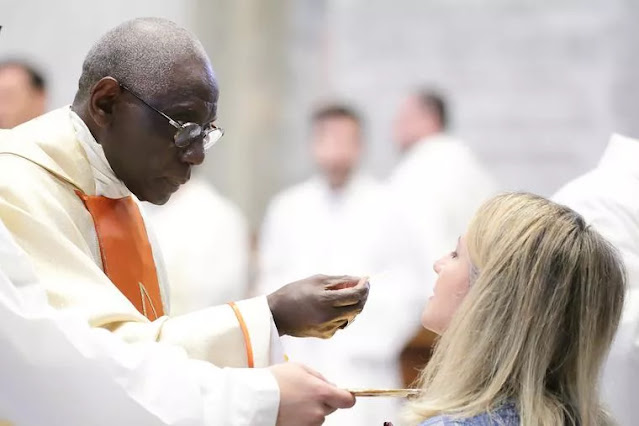 As everyone who reads my blog knows, I think I am clairvoyant! I posted the post below this one before I had read Cardinal Sarah’s article carried by the National Catholic Register.

In this article, Cardinal Sarah nails what the cardinals in the next conclave have to do, either elect a pope who will abrogate Pope Francis’ papacy of rupture, incoherence and confusion or elect a new pope in line with Pope Emeritus Benedict XVI coherent vision for the Church based upon theological unity of logic.

It is that simple and Cardinal Sarah is right on, not confused, incoherent or all over the place in his vision for the Church.

I would love to be a fly on the wall in Pope Emeritus Benedict’s compound and in the next conclave.

Here’s is a money byte:

At a time when some theologians are seeking to reopen the liturgy wars by pitting the missal revised by the Council of Trent against the one in use since 1970, it is urgent to recall this. If the Church is not capable of preserving the peaceful continuity of her link with Christ, she will be unable to offer the world “the sacred which unites souls,” according to the words of Goethe.

Beyond the quarrel over rites, the credibility of the Church is at stake. If she affirms the continuity between what is commonly called the Mass of St. Pius V and the Mass of Paul VI, then the Church must be able to organize their peaceful cohabitation and their mutual enrichment. If one were to radically exclude one in favor of the other, if one were to declare them irreconcilable, one would implicitly recognize a rupture and a change of orientation. But then the Church could no longer offer the world that sacred continuity, which alone can give her peace. By keeping alive a liturgical war within herself, the Church loses her credibility and becomes deaf to the call of men. Liturgical peace is the sign of the peace that the Church can bring to the world.

Press the title for the Register’s article:

On the Credibility of the Catholic Church

COMMENTARY: Throughout two millennia, the Church has already played this role of guardian and ferryman of civilization. But does it still have the means, and the will, today?

So you say. But don't hold your breath that your vision of Sarah's role in setting the conclave agenda has any serious tether to the reality of even a plurality of the electors.

I have to agree w/Percy. Sound bytes are great, they make us feel temporarily better. The problem is that "we" are too greatly outnumbered by "them" so, I expect nothing but more of the same regarding the next papacy.