JUST WHAT DOES POPE FRANCIS MEAN???? 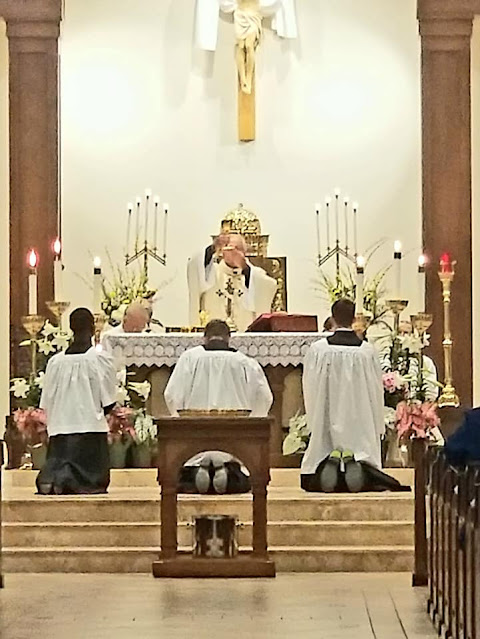 This is what His Holiness wrote (and I have read no commentary about it):

At the same time, I ask you to be vigilant in ensuring that every liturgy be celebrated with decorum and fidelity to the liturgical books promulgated after Vatican Council II, without the eccentricities that can easily degenerate into abuses. Seminarians and new priests should be formed in the faithful observance of the prescriptions of the Missal and liturgical books, in which is reflected the liturgical reform willed by Vatican Council II.

What does that mean? And why single out younger priests to be formed in the faithful observance of the prescriptions of the (newer) Missal and liturgical books? Aren't older priests the ones more likely to free-lance the new liturgy, ad lib and do all kinds of eccentricities for the sake of relevancy and being a showman?

I ask and you muse!

He means younger, more conservative priests better get with the post Vatican II program. Who knows with this pope?! Clown Mass anyone?

Both the 4 heresy hymn sandwich, and the gradual propers are both allowed by the Liturgical books of the post Vatican II liturgy..perhaps those odd aspects should be fixed before considering adherence to the books.

Good bishops should aggressively interpret this line. Use it to bring back Communion Railings and kneeling for reception of the Blessed Sacrament. Before PF catches on you could justify some excellent liturgical reform based on this line. Do to the liberals what they've done to us. He's given enough latitude with this line it would be a shame to waste it.

Father I think I recall you saying that when you read the instructional directions in the 1970 Missal that it is clear that ad orietem positioning of the priest is a given. Do I recall correctly or is it in an earlier version? If it is in the 1970 version then ad orientem becomes the norm, by the direction of Pope Francis.

In terms of ad orientem and use of Latin, Pope Francis has done both the most important ad orientem, the Baptism Mass in the Sistine Chapel with many youn families present.

What does the pope have in mind? What does he mean?

At this stage of things, what difference does it makes. What matters is what he does. The record speaks for itself. One would have to have blinders on NOT to see what he is doing to the Church.

Regarding the rubrics of the 1970 Missal, the priest, when making the opening sign of the cross is 'ad populum conversus'. Before the Orate Fratres we have 'versus ad populum', and before the Ecce Agnus Dei we have 'ad populum versus' followed by 'ad altare versus'. ICEL did not translate the first, and rendered the others as 'facing the people' and 'facing the altar'.

This would, in Latin, be 'versus populum' and 'versus altare', with 'versus' as a preposition. However, in 'ad populum/altare versus, it cannot be a preposition, and has to be a past participle. The preposition is 'ad'. So the correct rendering is 'turned towards the people/altar'.

If the priest has to turn to face the people and turn back to face the altar again, it assumes 'ad orientem' celebration.

All the same, Mass facing the people became normative six years before The Novus Ordo. 'Inter Oecumenici' (October 1964) saw the priest as a 'presider' and the Mass as a dialogue; both require face-to-face interaction.

Thank you John. So a traditional reform of the Mass could be initiated based on Francis' instructions in his Motu Proprio?

The Pope's statement also means that individual priests should not be "improving" the texts. Violates, Vatican II you know

So there is no reason why things should not carry on as before.

The clear intention of the Motu Proprio is to suppress the older rite, not to encourage a better celebration of the newer one. I have been attending the Novus Ordo in its sung Latin form for nigh on fifty years. It's not the rite that needs reform (although it could be improved) as much as the way it is commonly performed. Better practice has to start at grass-roots level. Bishops can lead by example, but will not correct abuses for fear of driving away those attached to them.

Similarly, with Mass attendance falling all over the western world, they are not going to alienate traditionally-minded Catholics either (the Bishop of Rome and his more fanatical followers excepted).

Well not the answer I was hoping for, but I'm not exactly asking based on prescribed rules that should be followed. I want to use the same rule book that the liberals have used to give us liturgical abominations but just do it in reverse. Can I get a hallelujah?

BTW the service you describe that you are attending and the ad orientem Novus Ordo Masses that Father McDonald celebrates I believe are the templates to implement while still being in full compliance with the Pope's wishes.