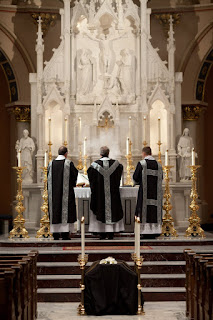 Either way, will it be televised? And if televised and if in the Extraordinary Form, how much will this assist the ongoing recovery of this form of the Requiem and this order of the Mass? Of course, Washington's Cardinal will be there along with the Papal nuncio and I suspect other cardinals, archbishops and bishops.  Perhaps Cardinal Burke will be the celebrant and this make perfect sense as His Eminence is a Canon Lawyer and would have much, very much in common with Justice Scalia! I can't imagine Cardinal Wurel celebrating an EF Requiem, but Cardinal Burke would do so in a heartbeat!

And if Cardinal Burke is the celebrant, the Mass is at the Basilica National Shrine of the Immaculate Conception and at its never used splendid high altar and it is an EF Requiem, all the other cardinals, archbishops, bishops and priests will not be concelebrating but attending wearing choir dress!

And if this is an Ordinary Form Mass, you don't have to be a clairvoyant like me to know that the following songs will not be sung at the funeral Mass:

We sing some of those hymns at my parish in Atlanta. We had "Amazing Grace" for instance two Sundays ago.

But of more concern that the use of hymns at his funeral should be his replacement---Scalia was one of those justices who (rightly) believed that the Constitution "is quite dead." What did that mean? Well, the meaning of the words today is the same as 200 years ago---and if you want to change the meaning, well you go through the amendment process---two-thirds of Congress and three-fourths of the state legislatures. But liberals, unable to get their way for so many years at the ballot box, preferred to find some activist judges who would rewrite the Constitution to achieve a pre-desired result. That is how we got ObamaCare (or RobertsCare) with John Roberts.

Perhaps his wishes regarding this are in his will.

I would suspect so, but also his son the priest, Father Scalia, would know, although for a priest son to discuss with his parents funeral arrangements for his parents doesn't always take place as it is a topic we wish to avoid.

Since Justice Scalia was a man of great Faith, intellect, and taste, it would only be natural for him to have an EF Requiem. Why would he want "Brand X."

MHT sings no. 4 at least twice a month. The new organist/music minister (from Macon BTW) seems determined to "mix it up". Reverence is not his schtick--performance is.

He needs firm direction; he sang in our EF men's schola. He is young and has great potential with proper direction/mentoring.

I couldn't agree more with you, Fr. He is obviously not getting the direction/mentoring needed. And the fact that he sang in your schola is laudable but not helpful apparently. He cannot sing on key when doing solo.

It would be great if it was an EF Mass and televised, Cardinal Burke would be the perfect celebrant, makes me laugh to think Wuerl would even be near an EF Mass, he hates the TLM.

I'm a MHT parishioner since 1975. I visit this blog on occasion, but have not commented in years. I got on today and noticed someone else's comment about the organist at MHT. I totally agree with the anonymous comment about the musical choices--and I also agree with Fr. McD's comment that he needs direction--I just don't think he will get it. Most days, its just an organ concert--before and after Mass--that truly interferes with prayer. Many call it "Circus" music. We don't come to Mass to hear a loud, sometimes disturbingly so, recital which is more appropriate to a performance outside of Holy Mass. And, the "Glory and Praise" music at Communion just doesn't work.

Drudge and Breitbart are reporting that a PILLOW was found over Scalia's head! I know the imposter in chief is a communist and a traitor but would he have ordered this done to ensure a majority Leftist Supreme Court??????

Anonymous at 11:07 AM I too read on Breitbart.com and Drudge Report as well as Gateway Pundit.com that a pillow was found over Scalia's face!!! This is getting strange by the hour!!

Forgive me if this seems rude, but is this speculation in good taste? This matter is only fitting for Mrs. Scalia.

Anonymous - We know that 1) Leonard Nimoy faked his death so that he could 2) take a leadership position in the Illuminati, and that 3) he ordered the assassination of Justice Scalia, and 4) quite possibly carried it out himself since 5) the Cibola Resort is populated by glitterati and other wealthy sorts.

Hey, I for one would not put anything past this administration, Drudge and Breitbart are not rag mags.

Any word as to Scalia's Mass being in the EF or the Novus Ordo? I would be very shocked if it was the Novus Ordo I think he would have wanted a TLM Requiem. The Novus Ordo continues to use white as opposed to Black vestments as is the proper way to have a requiem not white for this is for mourning.

Reported recently: "Scalia’s body will lie in repose at the Supreme Court on Friday, and a Saturday funeral service scheduled for 11 A.M. will follow at the Basilica of the National Shrine of the Immaculate Conception."

No word on OF or EF so far.

I doubt very much that Justice Scalia will be allowed to have a TLM even if that was expressed in his will. As regards his death, anything is possible especially if you read how a young woman who claimed P Obama was the father of her child was shot and killed (unarmed and with her baby in the car) after being pursued from the Whitehouse grounds supposedly having rammed some bollards when videos show otherwise. Very mysterious.

Jan - You have not read Justice Scalia's will, how can you possibly know what was "expressed" in it?

Your claim is just as loony as the suggestions that a) he was assassinated by Obama and 2) that Obama murdered the mother of his love child.

Scalia's ghost. Tut, tut, you are engaging in ad hominem!!! By the way, when your little god, Obama, was in the Illinois House he voted to leave babies dying on the table from a botched abortion.

Vatican II Novus Ordo will have its day on Saturday in all probability even though Bishop Loverde would permit the Tridentine Rite, but he does not control the Shrine Church; Cardinal Wuerl does. There are simply some churchmen who ignore the devastation which came about through misinterpretations of V2 Documents. They do not see the crisis in which our Church must surely find itself. Cardinal Burke would not be permitted in the Shrine Church, I believe.

Scalia's Ghost, it would be better if you read posts properly before commenting as I said "even if it were in his will". In other words to make it clearer for you that I doubt very much that a TLM would be permitted. And having watched the video of the young woman killed there is no way she rammed the bollards etc as was claimed. The whole thing is very suspicious in that she was pursued and shot five times - one shot through the head and a young child in the car. What do they say about "no smoke"? The whole incident is very questionable if one looks at the videos and not a good enough explanation given for the taking of a life.