BOMBSHELL! SOUTHEREN ORDER'S SCOOP! POPE FRANCIS TAKES A SERIOUS FALL THANKING A CHILD AT THE CORONATION OF THE IMAGE OF OUR LADY OF GAUDELOUPE!

I THINK I AM THE FIRST TO REPORT THIS. IT OCCURRED AFTER THE MASS LAST NIGHT BUT MANY MAY NOT HAVE WATCHED THIS!

If you wish to see this live, go to the video of the Mass last night I have posted below this post and go to hour 2, minute 12, second 59. He actually falls, at hour 2, minute 13. Fortunately and by God's grace he fell into the chair that he would use to meditate before the image of Our Lady of Guadeloupe. If he had actually fallen on the floor, I believe His Holiness would have been injured as he was falling backwards.

Here are screen shots of the moment. In the video, you can hear the thousands outside the basilica actually gasp and scream! 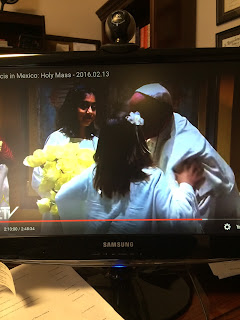 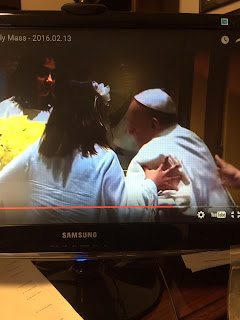 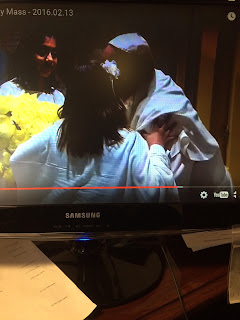 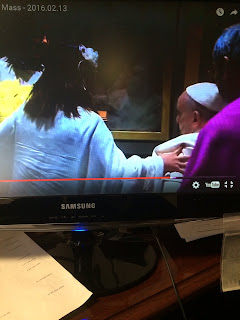 Father is he well? Or is this his personal "fall of Jesus" for the Xth time? I don't know what to think or how to be read into this but Pope Francis, despite his weaknesses, seems to have MANY parallels to Christ in his Passion, Death, and resurrection.

I caught that immediately, also when he was leaving Rome for Mexico he stumbled while walking up the stairs on his AlItalia jet, he seems to stumble quite often.

He didn't trip over or lose his balance; he seems to have blacked out for a second or two (more than just a dizzy spell, by the look of it). I hope he had a proper health check afterwards, and that his staff do something to shorten the rest of the events on the trip, as he's just not fit enough to stand up for extended periods.

I went to 8.30 Mass in Chestfield today. The priest there fell too--it was after the Creed, and he was going up the 2 steps that led to the altar. A couple parishioners rushed up to help him.
He said he just tripped on his alb.
But I'm not so sure...a pope falls in Mexico, a priest falls in Chestfield. How many other priests fell today, that we haven't even heard about?
Could this be the end times?

I saw that moment. But the Pope didn't take a serious fall. It looked like he just lost his balance a little but thank goodnes a chair was there for him to fall into otherwise he would have taken a serious fall. It almost seemed like he might have slipped of a step or something.

Yes, they've now edited the fall out of the video! I guess that after the rumours about Pope Francis's health back in October, his staff want to make sure that his opponents don't capitalize on incidents like this.

I just watched again and it is still there at 6:36 am Monday.

It was because of global warming, rich people, and the TLM. Global warming warped the floors and steps, and rich people have used so many of the world's resources that it has caused a fundamental change in the gravitational pull of her earth. Any time a TLM is said, the fund of Latin loose out there in the atmosphere creates a worldwide mental distraction which can cause some Priests to become disoriented. It is really a terrible thing.

Had it not been for fossil-fueled vehicles, he would still be in Rome, and this would never have happened. We have much to learn from Jainism, whose practitioners never travel except on foot.

Yes, Dialogue, I also learned that the Jainist's carry a long, soft-bristled brush with which to brush the path ahead of them in order not to step on bugs, worms, Democrats, or other vermin.

@ Fr. McDonald 6:36
You're right: I read the timing on yesterday's mass by mistake, rather than the Saturday one.

The Pope certainly looks to have taken more than a tumble in the last photo - he looks to be a bit out of it and he has had quite a few falls, which makes me wonder about the tumour he is said to be suffering from, and which could explain some of his off the cuff comments and unpredictability. I don't think he is well and much like St John Paul II The Great, I think his ill health is being downplayed.