UPDATE AND PERHAPS AN ANSWER TO MY QUESTIONS BELOW AND THE ANSWERS FROM JOHN ALLEN OF CRUX WHICH YOU CAN READ BY PRESSING THIS SENTENCE!
Like me, John Allen knows that the progressive press's evaluation of Pope Francis as a laid back non judgmental pope of the 1970's "I'm okay, you're okay" ilk is simply a lie and deception and a smoke screen to push the agenda of immorality in the sex industry. POPE FRANCIS IS THE MOST JUDGMENTAL POPE THERE HAS EVER BEEN IN MODERN HISTORY! READ WHAT JOHN ALLEN SAYS OF POPE FRANCIS IN MEXICO. HE ALSO SAYS, IF POPE FRANCIS ISN'T A JUDGMENTAL POPE, HE'D HATE TO SEE ONE WHO IS! 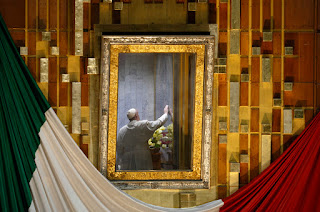 One commenter on my blog did not like the huge Mexican state flag prominently displayed in the Shrine of Our Lady of Guadeloupe for the Mass with the pope.

I know that Mexico has had a history of anti-clericalism in its government, so much so that in pre-Vatican II times, clergy and religious were forbidden by the government to wear their religious garb in public.

Then yesterday, Pope Francis wrote in the guest book of a Mexican seminary the following:

"Let all those who in this house are prepared for the priesthood, always keep foremost in their mind Jesus Christ, the Lord and His Holy Mother. And that they prepare themselves to be shepherds of the faithful people of God and not 'clerics of the state. Francis 14-2-16'"

What does it mean for the Pope to say to seminarians and by way of them to all clergy in Mexico, "(do) not (be) clerics of the state?" Please, someone who knows, please let us know. Would Pope Francis have been offended in Mexico to see the Mexican flag so prominantly displayed in the Shrine at a Mass His Holiness was celebrating? Is there a connection?

And on a different issue, how many of you go to a church that follows the example of Pope Francis' public Masses at the Vatican and on his travels where the altar is decorated like this? 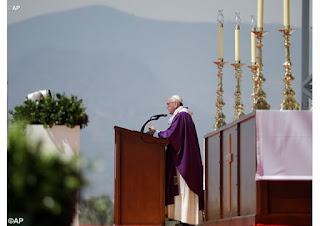 And Monday, February 15th's Mass with the indigenous people of Mexico:

MHT still uses the same altar arrangement as when you were pastor 15 years ago...

Until the 1990's, the Catholic Church did not legally exist in Mexico. The clergy and religious could not present themselves as such in public places. So, if there's anything the Mexican clergy are not, it's agents of the republic. However, unlike the communist clergy of the rest of Latin America, the Mexican clergy do not usually promote class conflict. In the thinking of some critics, perhaps that makes Mexican priests "clergy of the state".

The flag features an eagle defeating a snake. Perhaps some see a connection to the Virgin, whose feet trample the head of the Serpent. Or, perhaps her feet are meant to trample this banner of a Masonic state.

When I was a child, Mexican churches never had the national flag displayed anywhere inside, unlike US churches. It looks like something has changed.

Same thing happened in Cuba with Che Guevara's image as well as Cuban flag overlooking the entire proceedings. Why didn't the CC have priests to oversee the arrangements and stop any political coups before the Pope arrived to celebrate Holy Mass, or is this behaviour OK with the limp-wristed, pink lefties in the Vatican?

The Catholic Church has always had a too cozy relationship with the State...as long as it was not democratic or capitalist.

The Mexican flag is a symbol to the Aztecs when they saw the eagle clutching the snake in its talons to build their capital "Tenochtitlan" which is present day Mexico City.

Spanish troops led by Agustin de Iturbide and the Mexican insurgent troops of Vicente Guerrero which fought separately during the Mexican War of Independence (1810-1821) were unified to form the 'Army of the Three Guarantees' (Ejercito Trigarante) which consolidated Mexico's independence from Spain. The French Tricolor served as the inspiration for the design of the new flag for the new nation, but the colors were chosen to represent the 'Three Guarantees' - Green symbolized independence, white was for the Roman Catholic religion, and red is for union of Americans and Europeans.

The Mexican Coat of Arms is based on a legend, Huitzilopochtli, the Aztec's supreme deity, instructed the leader of the Aztec people to settle in a place where an eagle landed on a prickly-pear cactus, eating a snake. After years of wandering they found the eagle eating a snake on a on a prickly-pear cactus growing on a swampy island in the Lake Texcoco. They settled there in 1345 and built the great city of Tenochtitlan ("Place of the Prickly Pear Cactus"). It served as the most important Aztec city until it was destroyed by the invading Spanish in 1521. Mexico City is built on the ruins of this ancient metropolis.

Something makes me doubt that Msgr Marini is a "pink lefty". In any case, the Mexican flag isn't a party political symbol, unlike that mural of Che Guevara in Cuba: if Pope Francis's visit encourages loyalty to the Mexican state, rather than to drug lords and cartels, then that's no bad thing.

What I object to is the use of that dreary hymn for the Jubilee of Mercy at the start of this and every papal mass. If we're fed up with hearing it now, what's it going to feel like when we get to October or November?

I've thought, as a Mexican, that the flag there represented the huge part that Our Lady has played in Mexican identity and how devotion to her defined Mexicaness, as there's a joke that you don't have to be a Catholic to be a Guadalupano (and indeed in what may be superstition there's many people who don't consider themselves Catholic, or if they do they never go to Church, who nonetheless have a devotion to la Guadalupana).

Watching today's Mass with the 'indigenous people' I was reminded of the liturgies devised by another Marini - although without the dancing. I'm not sure that oompah bands are quite appropriate in Lent and seriously doubt that the music had much to do with aboriginal tradition. One song was surely by Sydney Carter.

A lot of what passes for 'inculturation' is phoney.

Not saying that I approve. I don't think national symbols belong anywhere in the sanctuary anywhere (not unique to Mexico either one parish I know uses the US flag as an antependium for national holidays). That being said, the flag of Mexico is regularly used at the Basilica to drape the image for major events. Can't say why...only that it is not unique to the Papal Mass

For years, the hallmark of US protestantism was a picture of Billy Graham and Richard Nixon (or other President) in Shea Stadium with the American flag waving over them. It was wrong then and it is wrong now. God is no respecter of nations, as Israel learned the hard way. The only appropriate banner for every nation on this earth is sack cloth.

John Nolan brings up a good point about inculturation being phoney - in that, the Northern European culture (latin, Gregorian chant, gothic architectural styles) is jettisoned.... the walls whitewashed, the catechesis watered down, songs tossed, Latin dispensed with brand new liturgical actions conjured up.... and we're all told this is the new way of celebrating mass.... but along comes brown people and by GOD their cultural traditions, songs, devotions, symbols, language, etc. must be respected and preserved and taught and encouraged AT ALL COST.

So we think of nothing about encouraging Guadalupan devotions while we snicker and roll our eyes at say, the Sacred Heart or European Marian devotions.

We'll enthuse about the Mexicans holding a big rally with bands, dancers, and processions (how quaint, how foreign, how cosmopolitan and cool) but our grandparents were brow beat into giving up their societies, Eucharistic adoration, rites and rituals etc. so we'd be bequeathed nothing but "youth" liturgies with no roots in the past, no connection to our ancestors, all calculated to "resonate" with today's ever changing youth pop culture as though that is proper inculturation.

We've been played and snowed. Why aren't our ethnic traditions and customs respected while others' customs are? Because unfortunately there has been a civil-war in the West for the past 100 years...a culture war between whites running through every tribe and ethnicity: pitting the "liberal progressive" aggressors who want to cut away any link to the past against conservative traditionalist victims who are largely reactionary, trying to defend themselves and their families with hardly any allies and little hierarchic support.

So we've been assaulted and dispirited for 100 years and the aggressors have the audacity to wonder why only 30% of Catholics go to Mass? Men are told to be ashamed of their fathers and grandfathers and their very selves...and we wonder why they stay away? Women are encouraged to simultaneously laugh at their mothers and grandmothers while taking every available role in the liturgy and the administration...and we're shocked that young women aren't flocking to Mass or ministry?

In the Hispanic community, their traditions that link all the generations together are RESPECTED and lo and behold they have no problem mustering men, women, children of all ages to their culture-affirming liturgies and paraliturgies. It's not rocket science.

Latin is from Northern Europe? I did not realise Rome had moved itself in the past 2753 years.

I really must acquire one of these moveable cities.