WHY HASN'T THE LIBERAL PRESS OR ANY PRESS MADE A BIG DEAL OVER THE VERY POWERFUL WORDS OF POPE FRANCIS CONCERNING ABORTION BEING A CRIME THE MAGNITUDE OF MAFIA CRIME ORGANIZATIONS AND BY EXTENSION OF NOT BEING CHRISTIAN IF ONE BUILDS WALLS, ONE IS NOT A CHRISTIAN WHO SUPPORTS THE MURDER OF BABIES IN THE WOMB?

Bravo to Pope Francis who has condemned abortion in words stronger than any of his predecessors. And implied in this powerful condemnation and judgment is that a person who has or promotes abortions is not a Christian and certainly isn't a Catholic! Thus they are forbidden to receive Holy Communion.  But mercy abounds for those who repent, go to Confession, do their penance, amend their lives and publicly become pro life!

These are Pope Francis' words, lightly reported by the liberal media, in that infamous interview above the Atlantic:

"Abortion is not the lesser of two evils. It is a crime. It is to throw someone out in order to save another. That’s what the Mafia does. It is a crime, an absolute evil... Abortion is not a theological problem, it is a human problem, it is a medical problem. You kill one person to save another, in the best case scenario. Or to live comfortably, no? It’s against the Hippocratic oaths doctors must take. It is an evil in and of itself, but it is not a religious evil in the beginning, no, it’s a human evil. Then obviously, as with every human evil, each killing is condemned." 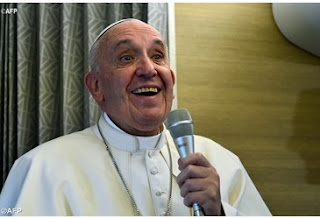 One thing is clear and Pope Francis doesn't have to pontificate upon it at all, since it is in the moral and canon laws of the Church. Anyone who has an abortion or participates in it in any way is automatically excommunicated. These people are not Christian; they are not Catholic.

We can certainly make connections to Bernie Sanders, who is not a Christian, but participates in this crime by his rabid and radical pro choice politics.

We can certainly make connections to Hillary Clinton, who is not a Christian for her support of this crime even to the 9th month in the most gruesome procedure called partial birth abortion.

We can certainly say this about Nancy Pelosi and Joe Biden, both of whom, because of their pro-abortion stances in order to sell their souls to the devil to win political office, promote this horrible crime as Pope Francis calls it.

In fact, Pope Francis should side with Cardinal Burke and tell Catholic public figures, politicians or otherwise, they are not Catholic and thus should not present themselves for Holy Communion as though it is some kind of talisman for their own self promotion and self edification.  His Holiness could start with the Cardinal Archbishop of Washington, DC and demand that His Eminence issue an edict publicly excommunicating any Catholic politician in Washington, DC who is pro choice which explicitly says that they are not Catholic and may not and cannot receive Holy Communion.

Wouldn't that put some teeth into Pope Francis' declarations about who aren't Christians.
Posted by Fr. Allan J. McDonald at Saturday, February 20, 2016

Dream on Father dream on. The Cardinal Archbishop has already stated that he has no problem giving communion to people like Biden. Biden who we will see this morning on national television going up to recieve communion at the Scalia funeral, which will be in the OF by the way.

The pope should have added that Hillary Clinton is not a Christian since she supports abortion.

And add to the list of criteria for "no communion", support for same-sex marriage. Of course politicians like Scalia and Biden did not get their on their own; obviously lots of people had to vote them into office. So maybe voters should get the blame too. The fact that Obama got half the Catholic vote last time is an absolute disgrace.

What would happen if either showed up to a certain church high on a hill in Macon, Georgia?

I have no power as a humble, lowly priest to excommunicate a Catholic or to make a judgment concerning a person's indisposition to receive. If the bishop did not permit him to receive I would follow through properly !

St. Francis of Assisi (1181-1226)
At the time of this tribulation a man, not canonically elected, will be raised to the Pontificate, who, by his cunning, will endeavor to draw many into error and death.”
Some preachers will keep silence about the truth, and others will trample it under foot and deny it. Sanctity of life will be held in derision even by those who outwardly profess it, for in those days Jesus Christ will send them not a true Pastor, but a destroyer.”

St. John Bosco (1815-1888)
“Your sons ask for the bread of Faith and no one gives it to them . . . Ungrateful Rome, effeminate Rome, arrogant Rome . . . Forgetting that the Sovereign Pontiffs and your true glory are on Golgotha . . . Woe to you; my law is an idle word for you.”

“There will be an Ecumenical Council in the next century, after which there will be chaos in the Church.” This prediction was made in 1862

Anne Catherine Emmerich (1774-1824)
“I saw that many pastors allowed themselves to be taken up with ideas that were dangerous to the Church. They were building a great, strange, and extravagant Church. Everyone was to be admitted in it in order to be united and have equal rights: Evangelicals, Catholics, sects of every description. Such was to be the new Church…”

Our Lady of La Salette

In 1846, the Mother of God appeared to two shepherd children in La Salette, France. She gave them many warnings about how God is going to punish mankind if mankind did not stop sinning. She also made some startling predictions.

“The Church will be in eclipse…. Rome will lose the faith and become the seat of the Antichrist.”-

Our Lady of Fatima
“In the end, my Immaculate Heart will triumph.”