REQUIEM; FUNERAL MASS; CELEBRATION OF LIFE; TOO MANY OPTIONS 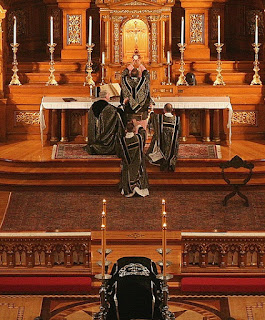 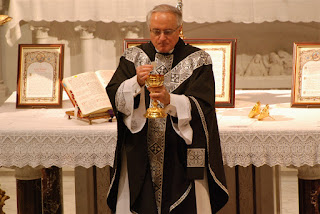 AND THEN THE RIDICULOUS ( THIS COULD ONLY HAPPEN IN THE ORDINARY FORM: 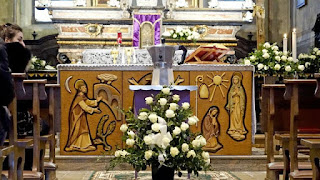 I've come to the conclusion that the Ordinary Form Funeral Mass allows for way too many options. The 1970's liturgical committee mentality that the family (which becomes a temporary liturgy committee) is to be involved in planning the funeral Mass and thus makes it what all committees make things, into an elephant or worse yet a giraffe must go in 2016!

First, there are a plethora of songs, many very banal, for them to choose for the four hymn sandwich. We all know that the ones mostly chosen are "Eagle Wings", "Be Not Afraid" "Amazing Grace" "How Great Thou Art" and maybe "Ave Maria".

Worse yet, the prescribed hymns/chants of the Funeral Mass are not even considered and most family liturgy committees do not even know these exist. There should not be substitutions of hymns for the the Commendation. These should be what is in the ritual to include "In Paradisum" either in Latin or an English version as the recession. The Song of Farewell should be what is in the ritual, not some kind of hymn.

Most Catholics do not know that there are three options for the liturgical color of the Funeral Mass: White, Violet or Black.

The other hallmark of the Ordinary Form Funeral Mass is to have or insist that family members do the various ministries of the Mass from placing the pall on the casket, to doing the readings and being Extraordinary Ministers of Holy Communion and serving the Mass. The Funeral Mass becomes a family affair all ordered by the family liturgy committee.  Usually those chosen to read haven't been to Mass in quite a while.  And then there's Aunt Sallie or Uncle Joe or great granddaughter Sue who will sing a song. And of course there are those, usually a few, who want to eulogize after Communion in the most banal and ridiculousness ways (something that could and should take place at the wake apart from any prayer).


But the Ordinary Form Funeral Mass need not be the one that the family liturgy committee decides. In fact the pastor of a parish could eliminate the need for a family liturgy committee and simply put in place a parish policy that would allow the Ordinary Form Liturgy to mimic the Extraordinary Form. He should pick the readings based upon what he as pastor knows about the decease and his/her family. He should pick the anthems or simply show what the parish options are for any additional hymns (which are not necessary, by the way) that could be sung at the Funeral Mass.

This is what the Ordinariate Missal allows or prescribes for funeral Masses and it is perfectly licit to use these in an Ordinary Form Funeral Mass:

The most important aspect of the post-Vatican II, 21st Century Divine Liturgy, the Missal's Funeral Mass, is that there is only one option in the Missal for the Funeral Mass of an individual. In other words, there aren't several for the Easter Season or outside Easter as in our Ordinary Form Latin Rite.

This is the Mass in the Ordinariate Missal:

There is no reason why the official Inroit even in this version could not be chanted by a soloist or schola at all Requeims:

Rest eternal grant unto them, O Lord: and let light perpetual shine upon them.

Rest eternal...(glory be is omitted in funeral Masses)

Rest eternal grant unto them, O Lord: and let light perpetual shine upon them.

V. The righeous shall be had in everylasting rememberance: he will not be afraid of any evil tidings.


Yea, though I walk through the valley of the shadow of death: I will fear no evil, for thou, O Lord, art with me.

V. Thy rod and thy staff: they have been my comfort.

Absolve, O Lord, the souls of all the faithful departed: from every bond of sin.

V. And by the succour of thy grace: may they be found worthy to escape the avenging judgemnt.

V. And enjoy the bliss: of everlasting light.

Sequence    Dies Irae  (no alleluias are used during funeral Masses at any time of the year, incense is used only at the Offertory and Final Commendation).

O Lord Jesus Christ, King of glory, deliver the souls of all the faithful departed from the hand of hell, and from the pit of destruction: deliver them from the lion's mouth; that the grave devour them not; that they go not down to the realms of darkness. But let Michael, the holy standar-bearer, make speed to restore them to the brighness of glory: which thou didst promise in ages past to Abraham and his seed.

V. Sacrifice and prayer do we offer unto thee, O Lord: do thou accept them for the souls departed, in whose memory we make this oblation: and grant them O Lord, to pass from death unto life: which thou didst promise in ages past to Abraham and his seed.

Prayer over the Offerings

To them in whose memory the Body of Christ is receive: grant, O Lord, rest everlasting.

V. And let light perpetual shine upon them. To  them in whose memory the Blood of Christ is receive: grant, O Lord, rest everlasting.

Let light eternal shine , O Lord, upon them: For endless ages with they blessed ones, for thou art gracious.

V. Rest eternal grant unto them, O Lord: and let light perpetual shine upon them. For endless ages with thy blessed ones: for thou are gracious.

V. Saints of God, come to his/her aid! Hasten to meet him/her, angels of the Lord!

Refrain:  Receive his/her soul and present him/her to God the Most High.

V. May Christ, who called you, take you to himself; May angels lead you to the bosom of Abraham.

Procession to the Place of Committal

Amen to this. It is sad that the modern form of the Mass would leave so much room for narcissistic behavior. We need a reform of the reform notwithstanding the preferences of this Pope.

Father any word yet that Justice Scalia's son will offer the EF form for his fathers Requiem Mass funeral???

I can't find any specific information on the internet about the Funeral Mass. I hope someone in the know will let us know! I had read somewhere that he had be cremated but I think that is not true.

Read that story on SHOEBAT.com Father, which has since "retracted" the story he was NOT cremated since it would go against Scalia's pre-Vatican 2 belief that Roman Catholics should NOT be cremated and our bodies should be intact.

The Drudge Report just announced that Pope Francis said Donald Trump is NOT a Christian since he wants to build a wall, who is this Pope to make such claims about our country and our political system??? Who is Francis working for, Pelosi, Obama, Biden, and all of these Democrats who support killing babies are just fine with him they are GOOOD CHIRSTIANS. This is utterly and completely amazing on the part of the Pope, and like Rush Limbaugh just said there is a wall surrounding the Vatican!!!!!