This isn't yesterday's Sexagesima EF High Mass, but a photo I found on an image search on the internet of a wedding at St. Joseph. I don't know who it is or if I am the celebrant. But it shows the restored altar railing, so it is relatively recent and one of the first weddings with the railing restored. It is an artsy sort of photo: 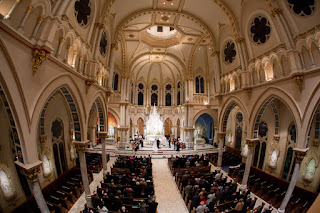 When I was pastor of the Church of the Most Holy Trinity in Augusta, I began a Latin Ordinary Form Mass at our Sunday Vigil Mass on Saturday evening. It was once a month. We have a men's schola chant complex Gregorian Chant for all the propers and parts of the Mass and I prayed the Mass in Latin. This began around 2002 or so. In fact this was the first time that I learned that the Proper Introit, Offertory and Communion Antiphons for the New Order Mass existed in Latin! I had no idea. This tells you how lacking my seminary formation was in the 1970's as it concerns the liturgy and how the actual reformed Mass with its propers was hijacked by liturgical theologians who gave us not what the Church gave us but something they wanted and concocted.

But I digress. At Most Holy Trinity, there was a small vocal minority who complained about the Latin. They decided to attend another Mass when we had the Latin Mass. They were not ugly about it, but let it be known though that this was an inconvenience for them. However, we had a huge group of parishioners and non parishioners who usually did not attend our Vigil Mass attend when it was in Latin. We had more people at the Mass when it was in Latin in other words, but the larger crowd was composed of non parishioners.

About four years ago, I decided to make our 12:10 PM Sunday Mass more of a "reform of the reform" Mass. This merely meant that the Liturgy of the Eucharist would be celebrated ad orientem. Around the same time for all the Masses we placed kneelers at our fixed Communion Stations to allow those who prefer to kneel to receive Holy Communion to do so comfortably. (This was before the restoration of our altar railing.)

No one complained whatsoever!!! That doesn't mean that there weren't those who didn't like it, but they did not indicate that to me.

Then two years ago when All Souls fell on a Sunday, we celebrated the 12:10 PM Mass completely in Latin (Ordinary Form) with our combined choirs singing Faure's Requiem. We had more people attending that Mass than usual and everyone raved about it. Of course this setting of the Mass is quite beautiful.

Then beginning in September we moved our 2 PM EF High Mass celebrated once a month on the first Sunday to our 12:10 PM Mass time and put it to the last Sunday of the month.

No one complained! Mass attendance remained the same and many young people attend this Mass which is always ad orientem and with Holy Communion distributed to kneeling communicants at the full length of our altar railing.

This is what Mallen from Atlanta had to say about yesterday's EF High Mass for Sexagesima Sunday:

Father, today was the first time I have had the opportunity to come down from Atlanta for the EF Mass since you moved it to the regular 12:10 time slot.

I can understand that it might be somewhat awkward having to go back to Ordinary time next week, but I think the benefits far outweigh the awkwardness. I felt the congregation overall was engaged in the Liturgy, the booklets made it much easier to follow for those who are not familiar with the EF. I remember thinking that most, if not all, of these people would never have the chance to experience the EF, or the season of Septuagesima. They may start to appreciate this rich liturgical season which helps prepare us for Lent, even if only for today's Sexagesima Mass.

If the EF is only offered at an obscure time slot how can it ever grow? Or have an enriching effect on the OF? I feel strongly that this is the way forward!